Charles Haddon Spurgeon (1834-1892), commonly known as “The Prince of Preachers” was a remarkable man and greatly used by God.

He preached his first sermon at the age of 16. At 17 he was installed as pastor at the Baptist church at Waterbeach. When he was 19 he became the pastor of The New Park Street Church, London, which had a congregation of 232 members and by the age of 20 he had preached over 600 times. Attendances grew rapidly and a much larger church which became known as the Metropolitan Tabernacle was built. It sat 5600 people and it was completed when Spurgeon was only 26. A period photograph is shown.

It was not long before this new church was filled to overflowing for the two services. During one service in 1879, Spurgeon asked the regular congregation to leave and come back the next Sunday, so that the crowd outside could come in. The building immediately filled again. By accepting invitations to speak, he often preached 10 times per week. One occasion being to a crowd of 23,654 at the Crystal Palace. 25,000 copies of his sermons were printed and sold each week, and these were printed in 20 languages. They continued to be printed weekly until 1917, 25 years after his death.

During his ministry, Spurgeon trained nearly 900 students in a pastor’s college he started, which was named Spurgeon’s College after his death. He established two orphanages and wrote over 140 books.

Even though his father and grandfather were ministers, it was not certain that he too would become a minister; he was one of seventeen children. So, at what point in his life was he born again and what caused him to dedicate his life to the Lord’s service? A service which brought so many people to faith and had such a dramatic effect on the people of Victorian England and then, through the western world. Who was it that opened the great evangelist’s eyes to the truth and set him on his path? The answer is, nobody knows. But Spurgeon often recounted this event which took place on a cold snowy morning in 1850 when he was fifteen years old and it is given here in his own words:

I sometimes think I might have been in darkness and despair until now, had it not been for the goodness of God in sending a snowstorm one Sunday morning, while I was going to a certain place of worship. I turned down a side street and came to a little Primitive Methodist Church. In that chapel there may have been a dozen or fifteen people. I had heard of the Primitive Methodists, how they sang so loudly that they made people’s heads ache; but that did not matter to me. I wanted to know how I might be saved….

The minister did not come that morning; he was snowed up, I suppose. At last a very thin-looking man, a shoemaker, or tailor, or something of that sort, went up into the pulpit to preach. Now it is well that preachers be instructed, but this man was really stupid. He was obliged to stick to his text, for the simple reason that he had little else to say. The text was; “Look unto me, and be ye saved, all the ends of the earth” (Isaiah 45:22).

He did not even pronounce the words rightly, but that did not matter. There was, I thought, a glimmer of hope for me in that text.

The preacher began thus: “This is a very simple text indeed. It says ‘Look.’ Now lookin’ don’t take a deal of pain. It aint liftin’ your foot or your finger; it is just ‘Look.’ Well, a man needn’t go to College to learn to look. You may be the biggest fool, and yet you can look. A man needn’t be worth a thousand a year to look. Anyone can look; even a child can look.

When he had managed to spin out about ten minutes or so, he was at the end of his tether. Then he looked at me under the gallery, and I daresay with so few present, he knew me to be a stranger.

Just fixing his eyes on me, as if he knew all my heart, he said, “Young man, you look very miserable.” Well, I did, but I had not been accustomed to have remarks made from the pulpit on my personal appearance before. However, it was a good blow, struck right home. He continued, “And you will always be miserable—miserable in life and miserable in death—if you don’t obey my text; but if you obey now, this moment, you will be saved.” Then lifting up his hands, he shouted, as only a Primitive Methodist could do,

I saw at once the way of salvation. I know not what else he said—I did not take much notice “Young man, look to Jesus Christ. Look! Look! Look! You have nothing to do but look and live!” of it—I was so possessed with that one thought I had been waiting to do fifty things, but when I heard that word, “Look!” what a charming word it seemed to me. Oh! I looked until I could almost have looked my eyes away.

There and then the cloud was gone, the darkness had rolled away, and that moment I saw the sun; and I could have risen that instant, and sung with the most enthusiastic of them, of the precious blood of Christ, and the simple faith which looks alone to Him. Oh, that somebody had told me this before, “Trust Christ, and you shall be saved.” Yet it was, no doubt, all wisely ordered. Spurgeon continued with the great joy that changed his life from that simple proclamation from a faithful servant. For the full text go to: http://www.middletownbiblechurch.org/helpseek/spurgeon.htm. He concluded with:

Between half-past ten o’clock, when I entered that chapel, and half-past twelve o’clock, when I was back again at home, what a change had taken place in me! Simply by looking to Jesus I had been delivered from despair, and I was brought into such a joyous state of mind that, when they saw me at home, they said to me, “Something wonderful has happened to you,” and I was eager to tell them all about it. Oh! there was joy in the household that day, when all heard that the eldest son had found the Saviour and knew himself to be forgiven.[1] 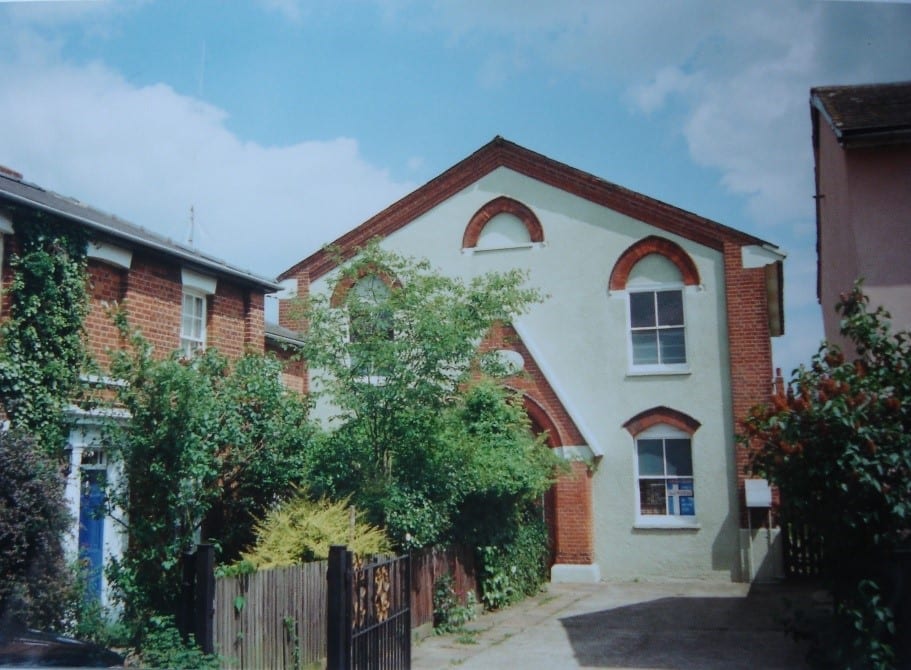 Note. That Primitive Methodist Church which was used so mightily of God still exists on Artillery Street, Colchester. It is now known as Artillery Street Evangelical Church and holds weekly services. Its website is:  http://artillery-street.org.uk/about-us/history and it is shown in the photo.

Nobody knows the name of that preacher who brought the Prince of Preachers to faith, but God does. He was not eloquent, did not say many words, but he stuck to words of the Bible. He probably said to his wife after the service, “I am so useless, I stumbled and mumbled for ten minutes and then sat down. God cannot use one such as me.” But it was he who changed the face of Victorian England.