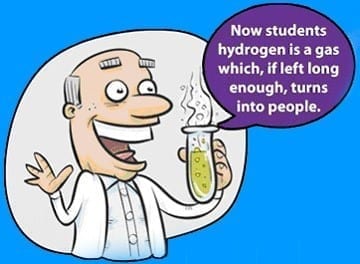 We are told ad nauseum that evolution is fact. It is the underlying assumption behind all mainstream scientific articles and magazines. Children are raised on nature shows, documentaries, books etc, all pushing this secular message. And when they go to High School and University they are taught that science, which has put man on the moon, enabled heart transplants and brought about the transport and information revolutions, has shown that that there is no need to invoke creation by a Supernatural Being, because we can show how everything came into existence all by itself. This attack on biblical Christianity has been very successful in emptying churches.[1] But it is not science and it is a lie!

Note, the sketch is compliments of Creation Ministries International found at creation.com. The evolutionary idea is that hydrogen was created in the Big Bang and part of it fused to form all of the other naturally occurring elements which then formed themselves into molecules then to cells with life, then to humans.

The Encyclopaedia Britannica provides the following definition of the scientific method: Scientific method, mathematical and experimental technique employed in the sciences. More specifically, it is the technique used in the construction and testing of a scientific hypothesis.[2]

Notice, science proceeds by testing a theory or hypothesis in the here and now. Evolution is an idea of what happened in the past; therefore, it is unrepeatable, unprovable and cannot be confirmed by any test, and it is certainly not science.

The protection of a bankrupt hypothesis

Like all lies, evolution needs to be protected from truth so it cannot be questioned. In fact, it has to be protected to the extent that no contra view will be tolerated and certainly not published.[3] Further, academics have lost their tenure and some have been dismissed from university positions for believing in supernatural creation. Author and actor Ben Stein produced a CD titled; Expelled: No intelligence allowed, in which he interviews such people.[4]

When one does a Google search for a schematic of evolution, all that is presented is the ubiquitous monkey to man series, because this is almost believable as an artist draws a monkey turning into a man who then strides confidently into the future. But Darwin proposed that single cell organisms converted themselves into mankind. Even though cells were not known at the time, Darwin called it; some primordial form.

Since there will never be a schematic of Darwinian evolution, I have had my own made: 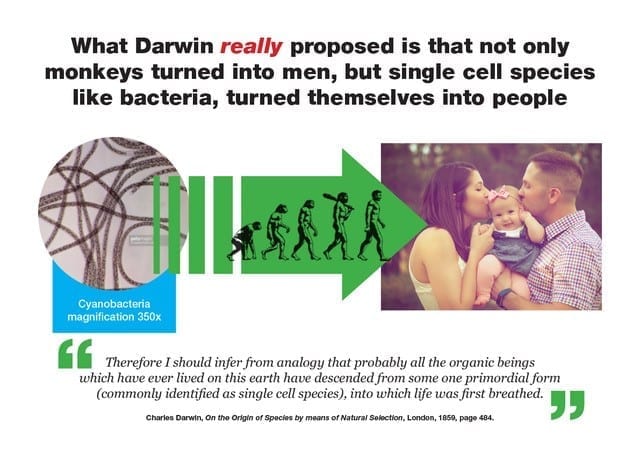 The above schematic is limited to Darwinian evolution. An explanation of how everything came about must go further. And it must start with nothing because if creation by a Supernatural Being is rejected, then it must start with creation by nothing because nothing is all atheists are left with. Not that such an illogical idea has deterred the faithful. Cosmologist and Massachusetts Institute of Technology professor Alan Guth had this to say:

Since it is not possible to find any schematic of this, I have provided my own which I also give away as a bumper sticker from my website.

I have six blog articles on why evolution is impossible numbering from one to six on my website. Since this is such a huge deception, I have decided to list these reasons below.

Any one of the above reasons rule out evolution and yet it now taught in all Western schools as fact. It has kept millions of people from receiving the joyous and secure life that only Jesus Christ can give. Its message is that we were formed by billions of chance molecular collisions and by the joining of biological entities. There is no morals, love, compassion or mercy, just mindless existence. Life has no meaning or purpose; you came from nothing and that is where you will go when you die. It has provided the reason for eugenics, euthanasia and abortion and yet, it is a lie.

George Wald, a 1967 Nobel Prize winner and an evolutionist, provides the real reason why people believe in evolution with this statement:

When it comes to the origin of life there are only two possibilities–creation or spontaneous generation. There is no third way. Spontaneous generation was disproved one hundred years ago, but that leads us to only one other conclusion, that of supernatural creation. We cannot accept that on philosophical grounds; therefore, we choose to believe the impossible: that life arose spontaneously by chance![9]

Interestingly, a Supernatural Being has contacted us and told us why He created, because it pleased Him.[10] How he created, he simply spoke everything into existence[11] and in what order He created, we can read this in Genesis chapter 1.

[1] Surveys showing the percentage of youth leaving the church

[3] The weekly scientific magazine, New Scientist, have stated that they will not publish any letter critical of evolution.

[4] It can be purchased from most retail outlets and online.

[5] A mutation is when DNA is not copied exactly. The idea here is akin to taking the Oxford dictionary, opening it at random and changing some words. If this process is carried out long enough, it will convert the Oxford dictionary into the much larger Encyclopaedia Britannica.

[6] Natural selection is the removal of some species due to environmental pressures. It always involves the loss of genetic information.