Why Evolution is Impossible Part 4

Information cannot come about by chance

Just as the information stored in a computer is in the form known as a binary code of 0 s, and 1 s, on the computer’s hard drive, so too the information stored in all forms of life is on its DNA in a series of four slightly different molecules called nucleotides which have been assigned the letters; C, G, T and A. Just as in a computer, the order of the units provides the information. DNA is composed of a series of nucleotides joined together like beads on a string. They exist in pairs of parallel strings and the nucleotides from each string are joined to each other by week bonds. The two strings exist in a twisted helical form a like twisted railway tracts as shown in the diagram. The order, in which the four letters are joined, provides the information for the construction of the species. 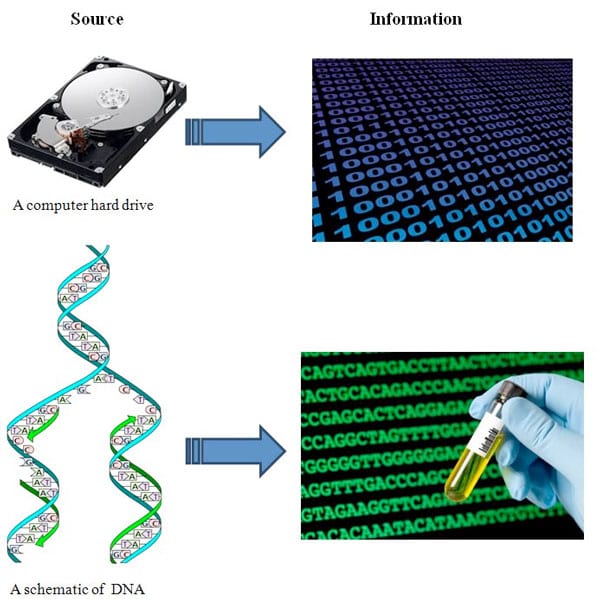 A bacterium has approximately 500,000 nucleotides in its DNA whereas the exceedingly more complex human being’s DNA has about 3,000,000,000 nucleotides. So for a fertilised human egg cell for example, the information stored in its DNA is read and acted upon by the machinery within the cell to construct an entire human being with all our complexities including 100 billion precisely-ordered brain cells (neurons) each with up to 10,000 connections. That makes an incomprehensible 1,000 trillion connections; each of them perfectly ordered. These give us the ability to plan, design, love and experience and exhibit our emotions in all their many forms, all emanating from the information stored in our DNA.

Even atheist apologist Professor Richard Dawkins had to admit:

There is enough information capacity in a single human cell to store the Encyclopaedia Britannica, all 30 volumes of it, three or four times over (1).

Philosopher Antony Flew explained the reason for his conversion to theism, after 50 years of atheism, as the fact that the investigation of DNA:

… has shown, by the most unbelievable complexity of the arrangements which are needed to produce life, that intelligence must have been involved(2)

By way of explaining information, consider the way letters of the alphabet can be arranged:

Information:    KEEP OFF THE GRASS

The chances of the statement; KEEP OFF THE GRASS coming about by the random joining of letters and spaces is 1 in 2718. Since 2718 is so large a number that it is beyond our human comprehension,the chances of such a simple piece of information forming is impossible and even more so for all of the information contained in DNA.

There are over one hundred biblical verses stating that the God of the Bible created everything, here is one: