Why Evolution is Impossible Part 5 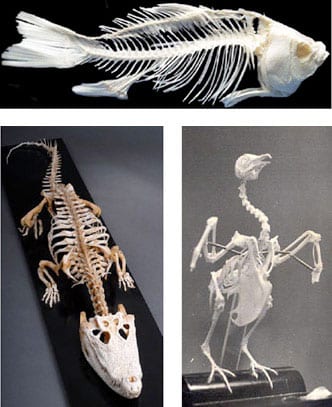 There are enormous anatomical and physiological differences between fish, reptiles and birds. Let us simply consider what is really being suggested and taught as fact. The fins of fish, which are used for propulsion and maneuvering and are connected to the body by ligaments, supposedly changed into the legs of a tetrapod (four legs), which enabled it to walk and run and to support its weight. In order for it to do this, the legs had to become an integral part of the animal’s skeleton. Next, the front legs turn into feathered wings. Mendel’s groundbreaking work showed through experimentation that if the creature does not possess the gene to code for feathers, then feathers will not be produced. As well, the whole bone structure of the animal had to change drastically from a composition of great strength that supports weight to one that does not need to support weight but must be light enough to enable the bird to fly. Consequently, the bones of a bird are hollow and amazingly light, yet still strong enough for the purpose for which they were designed. From the three images of the skeletons above, the reader is asked to consider the plausibility of the fish to reptile to bird transition.

Gills cannot be turned into bellows and then into parabronchi

The breathing mechanism is entirely different for fish, reptiles and birds. Fish are very active and as a consequence they need plenty of oxygen, but seawater contains only about one twentieth of the oxygen content of air, so fish have a very efficient way of extracting oxygen from water. As they swim or remain stationary in a stream of water, water enters through their mouth, flows over their gills and then out. The fish’s blood flows through minute blood vessels in the feathery gills in an opposite direction and as it does, oxygen from the water is exchanged with carbon dioxide from its blood. In this way fish get all the oxygen they need. However, reptiles receive their oxygen quite differently. They have lungs which operate like bellows, whereby air is drawn into sacs called alveoli which are flushed with blood. It is here that oxygen is exchanged and spent carbon dioxide is expelled with the air the same way it came in.

Birds have a totally different mechanism—a complicated system of air sacs, which even involve their hollow bones. This system keeps air flowing in one direction through special tubes called parabronchi, located in their lungs. Blood moves through the lungs’ blood vessels in the opposite direction for efficient oxygen uptake. See the diagrams below.

We have considered two aspects only, of the three creatures under discussion yet we find that each possesses complex features that are unique to it. It is utterly implausible that one beautifully designed feature could convert into another. We have not even considered the scientific impossibility that some intermediate species could function with something halfway between fins and legs or between legs and wings and yet be better at survival than the species immediately before it on the evolutionary tree.