Why Evolution is impossible Part 3

There are many reasons why evolution is not only unlikely but impossible. The theory requires a group of molecules to form themselves into a living organism. Here is one more reason why this could never had happened.

The problem of chirality

Some chemical compounds can exist in two forms which are mirror images of each other, just as our two hands are mirror images; they are not superimposable as shown in the diagram below for amino acids. Each form is known as an enantiomer from the Greek word meaning opposite. This feature of being able to have two spatial orientations which are either left hand or right hand is known as chirality.

In compounds from living organisms where chirality exists, only one form of the enantiomer is present exclusively. However, if the same compounds were made in a laboratory there is always a 50:50 mixture of both enantiomers produced. This is called a racemic mixture. 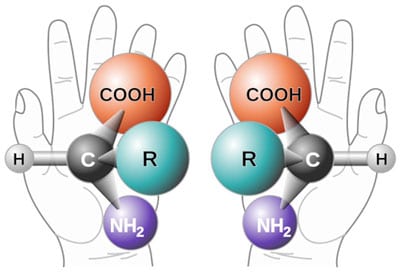 For compounds containing only one chiral centre, the naming of enantiomers is based on the stereochemistry of D glyceraldehyde. If the enantiomer has the same spatial configuration as D glyceraldehyde it has the prefix D. If its configuration is the opposite, it has the prefix L. All naturally occurring amino acids, except glycine which has no chirality, are in the L (left hand) form and all naturally occurring sugars are in the D (right hand) form. If it was not for this fact, life as we know it, would not exist because there are some proteins that catalyse biological reactions (known as enzymes) and this ability comes from the way the protein is folded. If some D amino acids were present, the folding would be different, the enzyme would be inactive and biological reactions would not take place. Similarly, DNA and RNAs incorporate the sugars deoxyribose and ribose respectively, which are in the D form exclusively and this exclusivity gives the structure its double helical shape. The presence of one L sugar would perturb the helical structure, yet if the sugars were produced by the random joining of the constituent atoms as evolutionists propose, then there would be a 50:50 mixture of sugars and life would not be possible.

Over time, all chiral compounds racemise, that is, they proceed to a 50:50 mixture of both enantiomers (left and right hand) and for biological compounds the functions they perform start to breakdown. Racemisation is part of the aging process. A tragic example of this is with thalidomide which was produced in the left hand form exclusively from a natural precursor and prescribed for treating morning sickness in pregnant women. However, the right hand form has been found to possess teratogenicity that is, it can disrupt fetal development. When taken internally or even when stored, the left hand form slowly racemised and produced horrific deformities in children1.

Only one form of optical isomers could not have evolved over time because over time, they racemise; that is, they go from being only one type to both types. This fact alone, completely rules out the possibility of chemical evolution.