Why evolution is impossible Part 2

Evolution1 is impossible because chemistry does not allow it.

Chemical evolution is the idea that all of the chemicals necessary for life formed themselves from their constituent elements and/or molecules and then arranged themselves into pre-cellular entities, which, over time, became fully functioning cells capable of reproducing themselves. Hence life came about from chemicals over a long time. This may seem fanciful, but it is what evolutionists believe. However, there are insurmountable problems with this thesis. Here, we will limit ourselves to some of the problems related to the formation of proteins which are an essential part of life. In fact no life exists without proteins.

In living organisms, proteins are formed by the joining together of amino acids (like beads on a string) by means of a very intricate biochemical pathway, through the use of, among other things, enzymes as catalysts. However, all but a very few enzymes are proteins themselves. In other words, it is necessary to have proteins in order for proteins to be made biochemically.

The problem of formation

Evolutionists propose that amino acids which came together to form proteins in some ‘primordial soup.’ For this reaction to have proceeded, it would have been necessary to have all, or nearly all, of the 20 various amino acids that make up natural proteins to have been present and exclusively left-handed with respect to their stereochemical orientation (see Part 3), and for them to be in a pure form, because many side reactions would have taken place, rather than protein formation if they were not pure. Even if all of these conditions were met, they certainly would not have combined to form proteins, because they do not react just by themselves, a very specific catalyst is required and in the biochemical sphere, this is another protein called an enzyme.

The problem of hydrolysis

A chemical reaction with water is called hydrolysis. In order to synthesise proteins from amino acids in a laboratory, special precautions need to be taken to remove the water which is formed when an amino acid is joined onto the growing protein chain, or else the reaction will revert back to the original amino acids. So for proteins to be formed in the environment, water must be excluded and quickly removed once it has been formed from the chemical reaction—a very unlikely scenario for the pre-biotic earth. However, current evolutionary theory requires water to have been present for the initial synthesis of amino acids.

The problem of stability

The amino acid cytosine, one of the 20 amino acids which are essential to life, has a biological half-life of 340 years at 25° C, making the idea of these compounds lying around in some type of primordial soup for thousands of years, waiting for some reaction to take place, highly implausible.
The problem of biological activity
In order for proteins to be biologically active, the constituent amino acids must be added to each other in a very precise order. In living cells, the DNA contained in the cell’s nucleus uses the information it holds in its structure to achieve this correct ordering. There are millions of ways in which amino acids can be joined together, but only a very few ways produce proteins that are biologically active.

The importance of amino acid ordering

The precision of the order of the amino acids in the protein is such that one out of order can have serious consequences. The problems come from mutations in the genes and are then expressed in the proteins that are made from these genes. Although there are hundreds, three examples follow that show what can happen if this order is not right.

1. Sickle cell anemia. With this malady, one amino acid out of the 146 in the protein beta globin, which is a sub-unit of the hemoglobin molecule, is in the wrong place. Valine is in place of glutamic acid and this small mutation in the protein causes the whole shape of the blood cell to be greatly distorted when oxygen is not bound to the heme molecule. Sufferers of this disorder have a reduced life-expectancy. 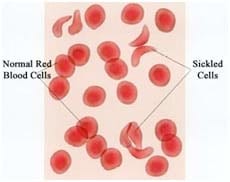 2. Type 1 hemochromatosis is a hereditary disease characterized by excessive intestinal absorption of dietary iron resulting in a pathological increase in total iron body stores2. The defective hemochromatosis (HFE) protein has been found to be due to any one of more than 20 mutations in the HFE gene which produces the HFE protein. Two particular mutations are responsible for most cases of this disorder. One mutation replaces the amino acid cysteine with the amino acid tyrosine at position 282 in the protein’s chain of amino acids. The other mutation replaces the amino acid histidine with the amino acid aspartic acid at position 63 of the protein’s chain3. As a consequence of just one amino acid being wrong out of a total of 348 amino acids the whole complex and interrelated biochemical pathway malfunctions.

3. Cystic fibrosis is an extremely debilitating and eventually fatal hereditary disorder. It has been shown to be due to a defective protein in lung cells known as cystic fibrosis transmembrane regulator (CFTR). The most common mutation causing this defect is the loss of the amino acid phenylalanine at position 508 on the 1,480 amino acid long chain of protein CFTR. That is, one amino acid missing from a protein chain of 1,480 amino acids causes the failure of the protein to shuttle chloride ions in and out of lung and other cells, which in turn causes lungs to clog up with mucus4. Photo: A representation of the Hemochromatosis protein 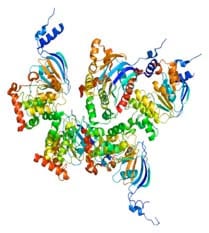 The probability of biologically active proteins forming by chance

Sir Fredrick Hoyle (astronomer) and Dr Chandra Wickramasinghe (mathematician) calculated the chances of biologically active proteins forming purely by chance from their constituent chemicals, which is what the Theory of Evolution, in its broad sense requires. In their 1981 book Evolution from Space, they calculated that the chance of obtaining the required set of enzymes (proteins which catalyse biochemical reactions) for even the simplest living cell was one in 1040,000. Since the number of atoms in the known universe is infinitesimally tiny by comparison (1080), Hoyle argued that even a whole universe full of primordial soup wouldn’t have a chance. He claimed:

The notion that not only the biopolymer (protein) but the operating program of a living cell could be arrived at by chance in a primordial organic soup here on the Earth is evidently nonsense of a high order5.
He compared the random emergence of even the simplest cell to the likelihood that a tornado sweeping through a junkyard might assemble a Boeing 747 from the materials therein and towards the end of his life, he came to the conclusion:
If one proceeds directly and straightforwardly in this matter, without being deflected by a fear of incurring the wrath of scientific opinion, one arrives at the conclusion that biomaterials with their amazing measure or order must be the outcome of intelligent design. No other possibility I have been able to think of.61