The point of this article is not to tie people up with biological terms but to highlight an amazing nano rotary motor called ATP Synthase. So please read on and you will be amazed by God’s magnificent creation.

Cells in the human body 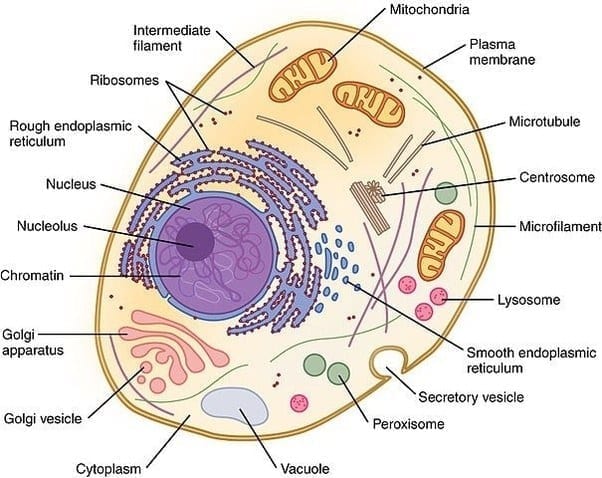 The human body consists of 200 different types of cells. These include; brain, muscle, blood, nerve, hair, liver, skin, fat etc, all adding up to 37 trillion, that’s 37,000,000,000,000. Each cell is extremely complex. Cells provide structure for the body, take in nutrients from food, convert those nutrients into energy, and carry out many specialized functions. Cells also contain the body’s hereditary material; DNA and they make copies of themselves.

The cell diagram is a royalty free vector.

One of the many complex functional parts of a cell is the mitochondrion which generates the energy required by the cell. Mitochondria are small organelles floating free throughout a cell. Some cells have several thousand mitochondria while others have only a few hundred. For example, muscle cells need a lot of energy so they have many mitochondria. Neurons, cells that transmit nerve impulses, don’t need as many. When more energy is required, more mitochondria are formed. The major overall chemical reaction in the mitochondrion is where glucose is broken down to carbon dioxide with energy being released. This is by way of the Citric Acid Cycle (CAC), or Krebs cycle. Here, oxidation of acetyl-CoA derived from carbohydrates, fats, and proteins, are converted into adenosine triphosphate (ATP) involving much nano machinery. More about this can be found here. [1] Part of this process involves the production of ATP by way of a nano motor called ATP Synthase. There are many thousands of ATP Synthase in each mitochondrion.[2]

As stated, the key component in this energy generating reaction is the enzyme called ATP Synthase which creates the energy storage molecule adenosine triphosphate (ATP) from adenosine diphosphate (ADP). ATP is a small energy rich molecule which provides energy when it drops back to ADP, which in turn is converted back into ATP by ATP Synthase. 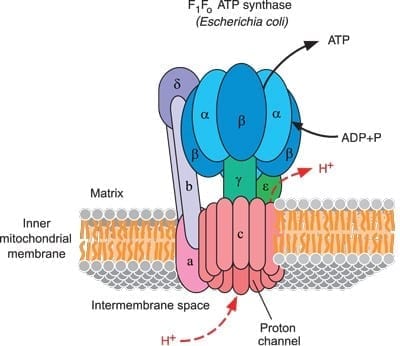 For every turn of the “spindle” Y, three molecules of ADP plus phosphate (P) are converted into three molecules of ATP. This nano motor spins at between 7,000 and 9,000 revolutions per minute[3] and operates with close to 100% efficiency,[4] churning out half of our body weight in ATP per day; staggering! The ATP generated is used quickly. There are thousands of trillions of these motors operating in every person.

A modern car’s motor by way of comparison, may be able to reach 7,000 revs and could possibly maintain it for several hours with an efficiency of about 20%. ATP Synthase maintains this speed during its life and then reproduces itself.

To view a 1 min. 25 sec. video which is courtesy of, and used with permission, from Creation Ministries International; creation.com, click here.

Even more astounding than these nano motors themselves, is the fact that some people think that not only these motors, the mitochondrion that houses them, the cells that contain the mitochondria with all of its incomprehensibly complex machinery, formed by themselves originally from nothing. It is staggering the lengths that people will go, to deny the Creator. They will have no excuse for their denial as the great apostle makes clear in Romans 1:20:

For since the creation of the world God’s invisible qualities—his eternal power and divine nature—have been clearly seen, being understood from what has been made, so that people are without excuse.