Nineveh was originally established by Nimrod in about 2,300 BC as mentioned in Genesis chapter 10. Nimrod was a descendent of Noah’s son Ham. Its status as the capital of the great Assyrian empire was given to it by one of its most successful kings, Sennacherib (705-681 BC) who enlarged and beautified the city greatly.[1]

Nineveh was the capital of the Assyrian empire and the Bible records its significance when the Lord said to Jonah:

“Go to the great city of Nineveh and preach against it, because its wickedness has come up before me.”

The Assyrians were a particularly cruel people, almost cruel for cruelty’s sake. They blinded their captives, pulled out their tongues, skinned them alive etc. for more, click here. 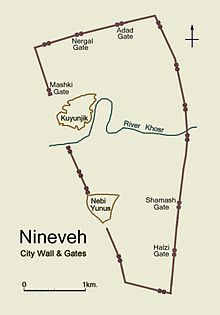 After its destruction, Nineveh appeard to have disappeared completely, although its location on the Tigris River opposite modern-day Mosel, was known to some continuously through the Middle Ages. Benjamin of Tudela visited it in 1170; Petachiah of Regensburg soon after.[2] But it was only after its excavations by Sir Austen Henry Layard from 1847 to 1854 was the city’s once great size, wealth and splendor revealed, see excavation photo below. The diagram shown (right), which was constructed from Layard’s excavations gives evidence to this. In terms of size it was on par with Babylon and the diggings have shown part of it was enclosed by a brick wall 12 kilometers long and containing 15 city gates with an enclosed area of 750 ha (1,850 acres). It contained such luxuries as public squares, parks, botanical gardens and even a zoo.[3] The Kuyunik mound under which Nineveh lies, yielded the vast palace of Sennacherib containing two large halls each some 650 sq mts (7,000 sq ft) and more than 2,750 mts (9,000 feet) of walls decorated with inscribe annals of the king’s exploits. Many winged bulls and sphinxes some weighing as much as 30 tons guarded the entrances.[4] Also unearthed, was the royal residence and famous library of Ashurbanipal in which were housed 22,000 inscribed tablets.[5] As well, a 30-mile-long aqueduct was constructed by Sennacherib to bring fresh water into the city. 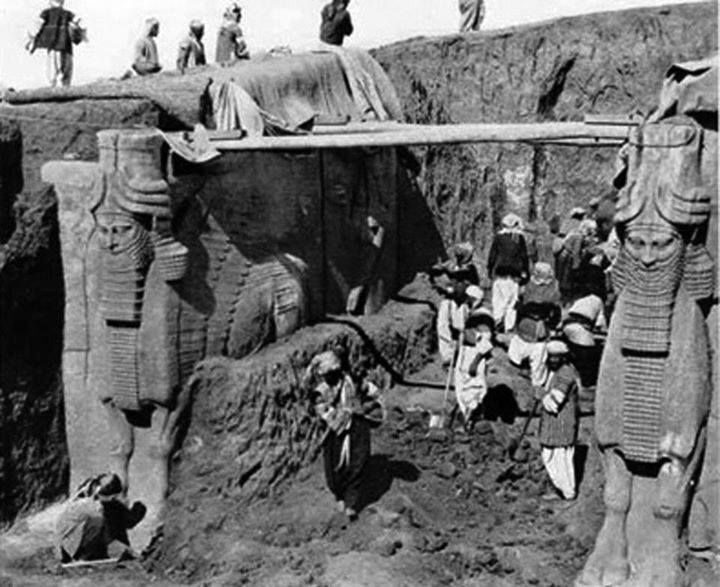 Below is an artist’s impression of a hall in an Assyrian palace from The Monuments of Nineveh by Sir Austen Henry Layard, 1853. 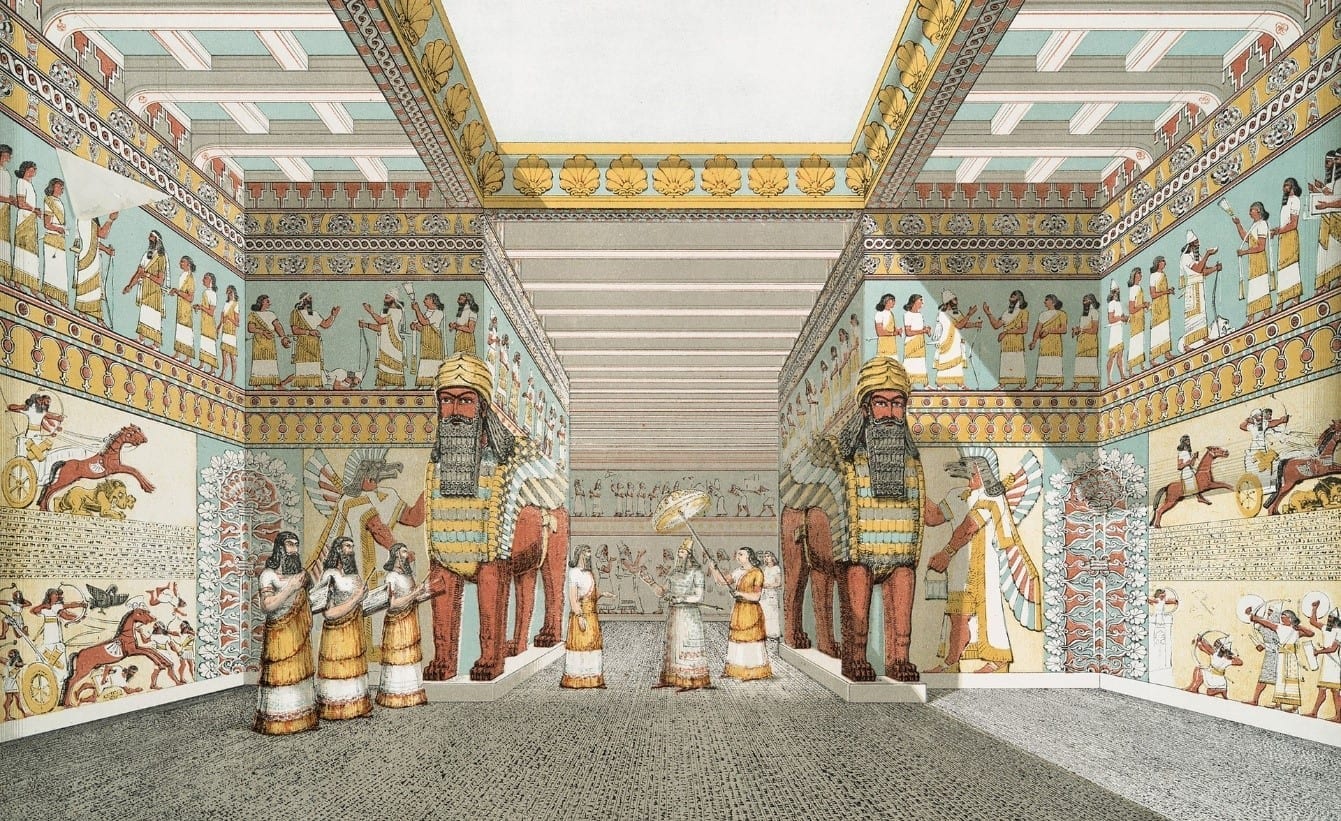 Nineveh was a physical representation of the grandeur and power of the mighty Assyrian empire and seemingly indestructible.

Nahum wrote about 100 years after Jonah and about 50 years before Nineveh’s destruction. His whole book is a prophecy against Nineveh. Two are of particular relevance:

13 He will stretch out his hand against the north and destroy Assyria, leaving Nineveh utterly desolate and dry as the desert.

14 Flocks and herds will lie down there, creatures of every kind. The desert owl and the screech owl will roost on her columns. Their hooting will echo through the windows, rubble will fill the doorways, the beams of cedar will be exposed.

15 This is the city of revelry that lived in safety. She said to herself, “I am the one! And there is none besides me.” What a ruin she has become, a lair for wild beasts! All who pass by her scoff and shake their fists.

The fall of Nineveh which brought an end to Assyrian history is in line with biblical prophecy. An alliance of Medes, Babylonians and Scythians destroyed Nineveh in August 612 BC after a two-month siege.[6] This great victory was due in part to the releasing of the city’s water supply and the inundation of the Koser river dissolving the sun-dried bricks with which much of the city was built.[7] Also, excavations have shown a course of pebbles and sand a few feet beneath the surface. When archeologists unearthed the site in the mid 1800s, they found a layer of ash covering the ruins as per prophecy.

Nineveh suffered a defeat, from which it never recovered. Extensive traces of ash, representing the sack of the city by Babylonians, Scythians and Medes in 612 BC, have been found in many parts of the Acropolis.

Nineveh was destroyed to such an extent that there was hardly a trace left and liberal theologians claimed that biblical references to Nineveh must not be taken literally but must be allogorised.[8] This mighty fortress city with its massive defensive walls, huge statues contained in even larger buildings, immense engineering works in diverting a river, all flattened and hidden. It became a place where wild animals roamed as Zephaniah wrote.

The unusual prophecy of Nahum; The river gates are thrown open, and the palace collapses, became true when the attacking army released the city’s water supply. 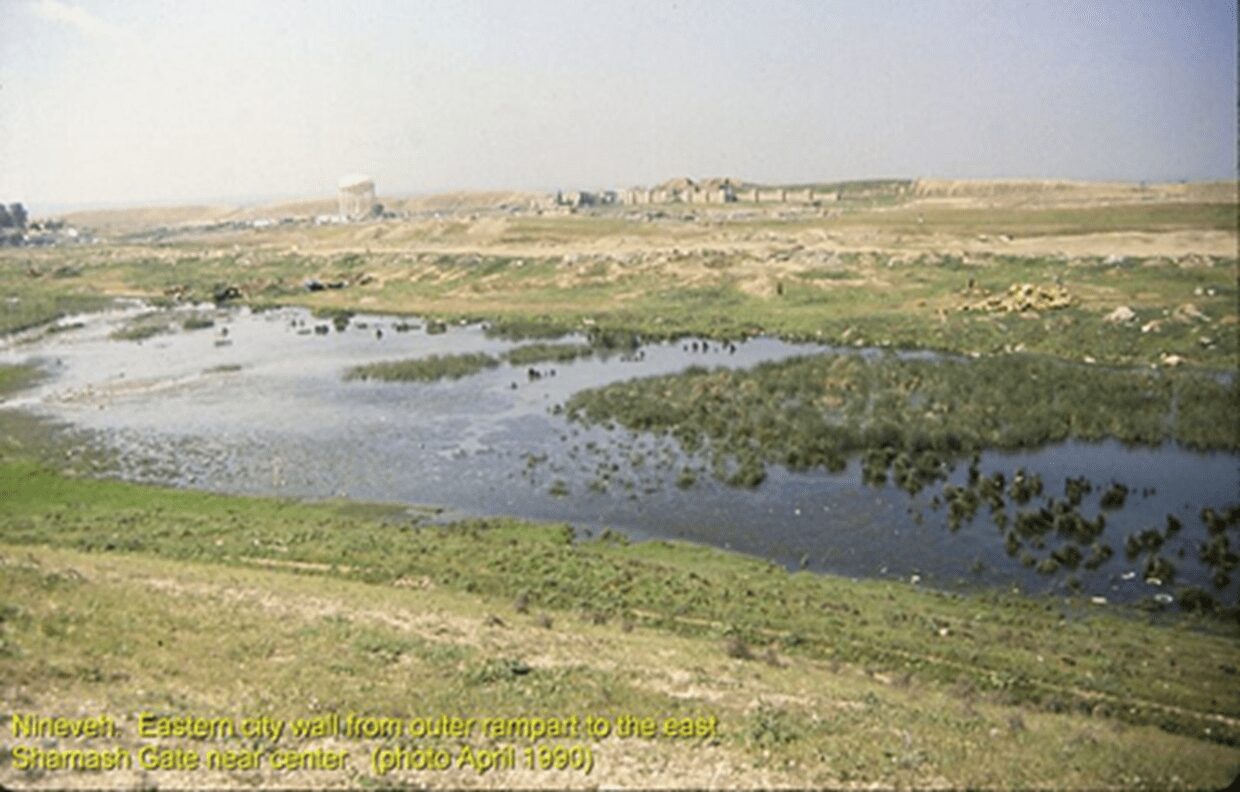 These prophecies, like the others pertaining to biblical cities, are not vague, but precise. When Nahum was writing under the influence of the Holy Spirit, that the king’s palace in the great city of Nineveh would collapse due to water inundation, and it would be burnt to the ground, he might have thought of how implausible it all would be. And when Zephaniah wrote, again under the influence of the Holy Spirit, that the great city would be reduced to such an extent that wild animals would roam through its derelict structure, he too would think that it would be impossible. Such is the reality of biblical prophecy.

Luke 1:37 For nothing is impossible with God.