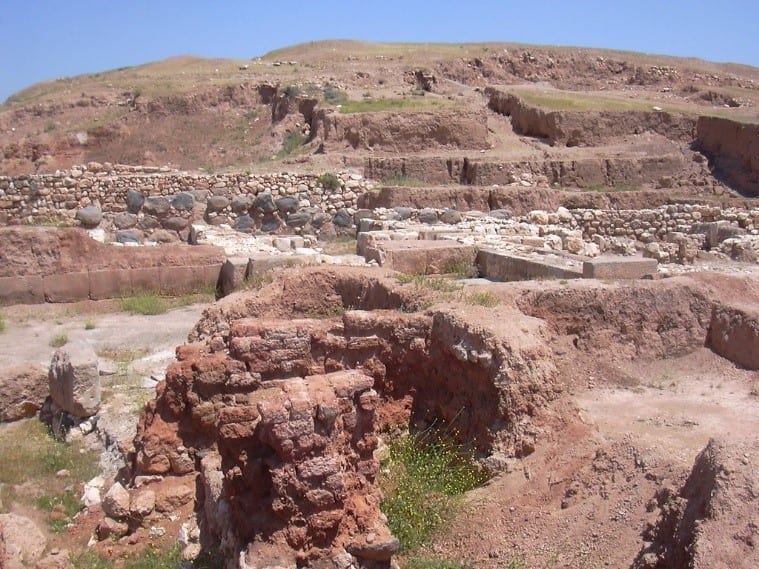 Archaeologists knew from their study of Sumerian, Akkadian and Egyptian texts that there had been once an ancient assyrian empire called Ebla. In 1964 a young graduate of Rome University, Paolo Matthiae and his team uncovered the remains of a city under what was known as Tell Mardikh (pictured) some 30 km south of Aleppo in northern Syria. The tell was identified during their excavation of 1968, when they unearthed a male statue containing a 26-line inscription with the words; dedicated to Ibbit -Lim, son of Ikris-Hepa, King of Ebla.[1]

Over the next few years, they unearthed almost 2,000 clay tablets in a room associated with the king’s palace. Professor Giovanni Pettinato also from Rome University, a specialist in Sumerian and the Akkadian and the languages of Mesopotamia which are were all written in cuneiform text, was the epigrapher who deciphered/translated the tablets. When the tablets were first found, it was soon realised that the city used a very ancient language in the North West Semitic group which was previously unknown. Professor Pettinato labelled this Paleo-Canaanite. In layman’s terms, this means ancient Canaanite.  These Ebla tablets are written in a Sumerian script, with Sumerian logograms adapted to represent Akkadian words and syllables.[2] Decipherment of some of the texts showed Ebla to have been a flourishing empire with a population of 260,000 people[3] some 4,500 years  ago (2,500 BC), which was during the patriarchal period. Babylonian kings claimed to have conquered this vast kingdom around 2,300 BC.[4] 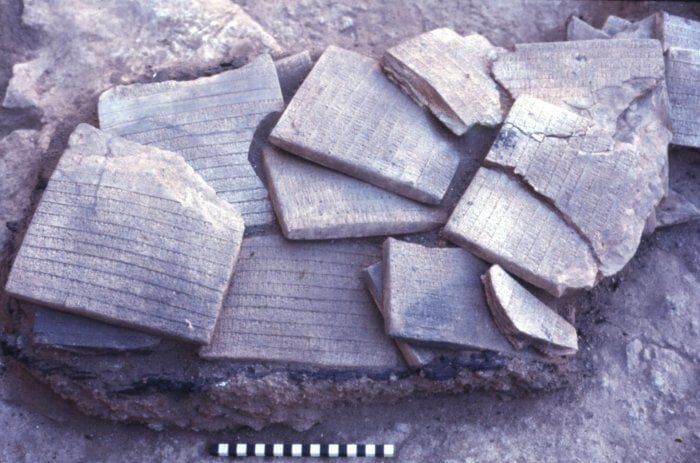 Extensive, but not complete, reading of these tablets showed that they dealt with very many aspects of a large society. These have been covered by Dr Clifford Wilson in his book: Ebla Tablets, secrets of a forgotten city. Some texts contained up to 3,000 lines on a single tablet, relaying personal information, duties, one plate alone records 260 geographic names. There are literary texts with mythological backgrounds, incantations, collections of proverbs and hymns to various deities. Rituals associated with various gods being known in Babylonian literature of a later period. These include Enki, Enlil, Utu, Inana, Tiamut, Marduk and Nadu (page 21).

Most of the tablets deal with economic matters, tariffs, receipts and other commercial dealings. These tablets prescribe what tariffs should be set and what tribute should be paid. There are contracts of sale and documents about the possession of goods. They deal with shipping and bills of lading and refer to unfinished supplies that have been brought into the city. Payment is mentioned in terms of silver and gold—the ratio of gold to silver varied somewhat, but it was around 5, 6, or 7 to 1. Ebla was the center of a great trading empire, with trade relations stretching right across the Fertile Crescent, with the possible

exception of Egypt. One of the interesting illustrations of this comes from the list of rations given to messengers as they traversed certain routes, with the names of cities given. The biblical towns of Ashdod and Sidon are mentioned (pages 22-23), along with Hazor, Lachish, Megiddo, Gaza, Dor, Sinai, Ashtaroth and Joppa as well as Sodom and Gomorrah, but not just them, the whole five Cities of the Plain; Sodom, Gomorrah, Admah, Zeboiim, and Zoar (also called Bela) are part of the list.[5] Here, we are transported back to about 2,300 BC, and find that these towns were visited regularly being on the route of the King’s Highway.

It is clear that Ebla was a well-functioning city state which provided trade, protection and security for its residents at the time of the Patriarchs. So much for those liberal theologians who proclaim that even writing was not fully developed at the time of Moses, who came almost 1,000 years later. And that the first five books of the Bible (Torah) were written during Israelite captivity. Also, the Ebla tablets support the Bible with the biblical cities it names providing confirmation that they really existed. Sodom and Gomorrah stand out because many liberal Bible scholars say that these cities never really existed but are only named in an allegorical way.

All of the above is all fine and a true representation of what was actually discovered and said, but the Syrian Government reacted strongly to the support these tablets gave to the Bible. They declared: These allegations (linking the Ebla tablets with the Bible), were propagated by Zionist-American centres to be exploited for atrocious purposes aimed at proving the expansionist and colonialist views of the Zionist leaders. The director of the Syrian Department of Antiquities, Afif Bahnassi sought and obtained an Official Declaration in which Pettinato, the man who translated the tablets, in effect, recanted. In this formal document, Pettinato states that the tablets always give us more evidence of the central role of Syria in the third millenary.[6] The pressure Syria can apply to archaeologists is to prevent them from doing any exploratory work in Syria.

Biblical Archaeological Review stated that it finds this Syrian interference in scholarly enterprise highly objectionable. Even though Pettinato did revise (under pressure) the information he obtained from the Ebla tablets, he still maintained that the names of Sodom and Gomorrah were listed among the other cities mentioned on the tablets.[7]

This conclusion is taken from Holden and Geisler.[8] Previous to this discovery, critical scholars argued that many of the words used in the Genesis stories were developed late, long after the stories Genesis describes and therefore the text could not have been written any earlier than around 700 BC. However, the tables changed this critical climate when it was recognised that the patriarchal narratives found in Genesis accurately reflected many of the words, names, customs and locations found in the earlier Ebla tablets. This eliminates the notion of late word origination and supports the fact that Genesis accurately reflects the ancient world prior to 700 BC.

Again, more evidence showing that the Bible is true and can be relied upon.