The European Union must disintegrate because Daniel said so

The king of Babylon Nebuchadnezzar, had a dream and he wanted to know its meaning. In order to test the honesty and capability of his magicians, enchanters, sorcerers and astrologers, he did not tell them what he a had dreamt but they had to tell him and then interpret it. The king made clear that if his wise men could not tell him his dream, they all would be put to death. As Daniel[1] who became part of this group, was being taken for execution, he asked the guard what was it all about. When he was told, he pleaded to the king for a stay of execution for all concerned. Daniel prayed to his God, the only true God and was given the answer in a dream. 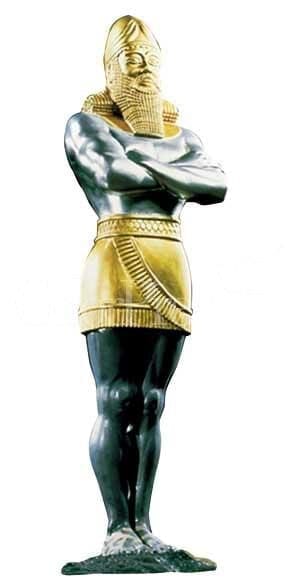 31 “Your Majesty looked, and there before you stood a large statue—an enormous, dazzling statue, awesome in appearance. 32 The head of the statue was made of pure gold, its chest and arms of silver, its belly and thighs of bronze, 33 its legs of iron, its feet partly of iron and partly of baked clay. 34 While you were watching, a rock was cut out, but not by human hands. It struck the statue on its feet of iron and clay and smashed them. 35 Then the iron, the clay, the bronze, the silver and the gold were all broken to pieces and became like chaff on a threshing floor in the summer. The wind swept them away without leaving a trace. But the rock that struck the statue became a huge mountain and filled the whole earth.

The assignment of the body parts to kingdoms or empires

It is a straightforward matter to assign empires to the statue, because Daniel tells us that it starts with the Babylonian empire and we simply follow history from there. Note also, the decreasing value of the metal from gold to silver to bronze to iron and finishing with iron and clay. But also, the increase in strength of the metal. Iron being much harder than bronze which is harder than silver which in turn, is harder than gold. 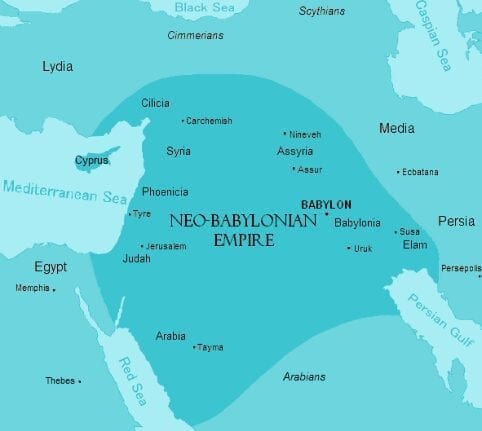 We know that the first kingdom, is the head of gold because Daniel told Nebuchadnezzar in verse 38; In your hands he has placed all mankind and the beasts of the field and the birds in the sky. Wherever they live, he has made you ruler over them all. You are that head of gold. Babylon, we are told, was the most glorious kingdom of all, which is why it was represented as gold.

The Babylonian empire ruled from the rise to power of Nabopolassar in 626 BC to the Persian invasion in 539 BC, a total of 87 years.

Chest and Arms of Silver. 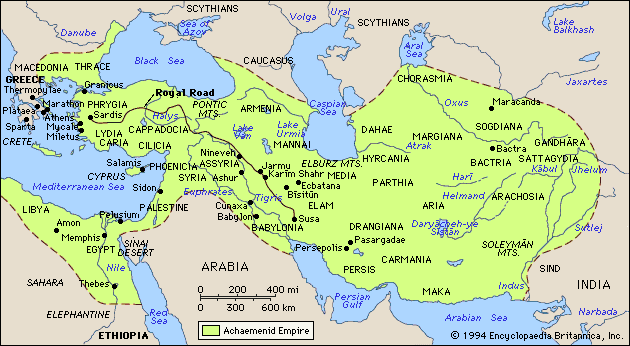 Historically, Babylon fell to the Medes and the Persians in 539 BC which brought Babylonian rule to an end and Daniel 5:30 and 8:20 confirms that this kingdom is the Medo-Persian kingdom. This duopoly is represented by two body parts; the chest and arms which are of silver.

The empire also known as the Achaemenid Empire by its founder, Cyrus the Great, existed from 539 to 330 BC and lasted 209 years. See map right. 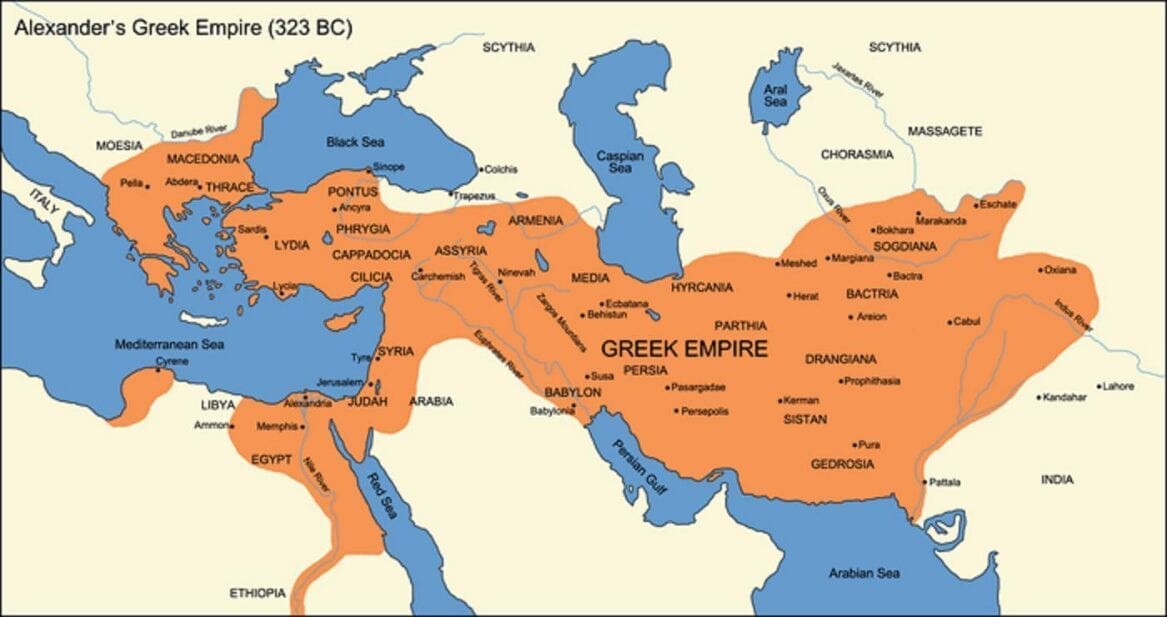 Alexander the Great of Greece conquered the Medo-Persian empire in 330 BC and installed the Greek language and culture throughout the then known world. This is represented in the statue as Belly of Bronze[4] which is confirmed by Daniel in two subsequent visions 8:21 and 10:20 as being the Greek empire.[5] Also of interest, is that Greek soldiers carried shields covered in bronze and all of their armour and helmet were made of bronze.[6] The Greek empire collapsed in 146 BC. 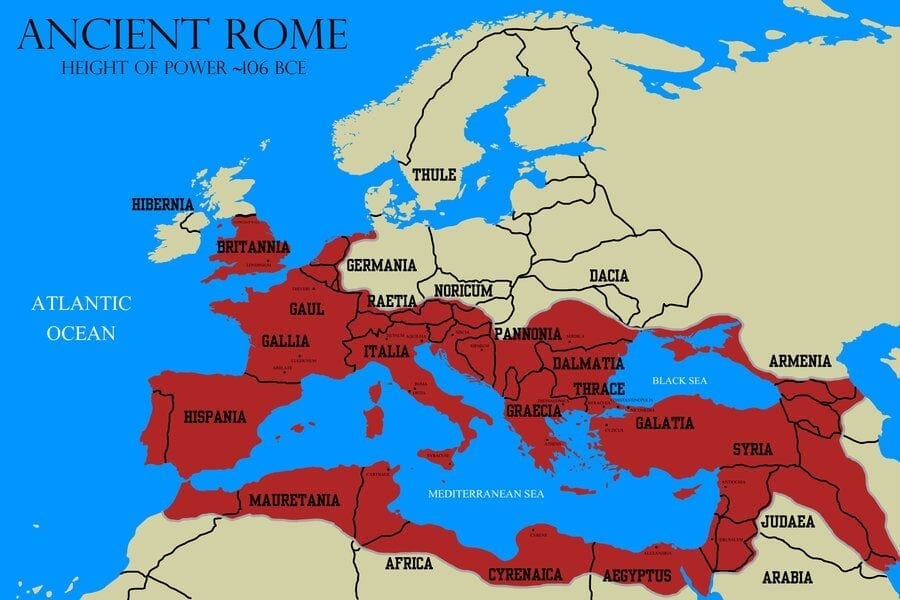 The Battle of Corinth in 146 BC marked the end of the Greek empire with Rome being the victor. Rome controlled a larger part of the world than any of its predecessors and Rome ruled with a “fist of iron.” On Nebuchadnezzar’s statue, the legs of iron are representative of the Roman empire. Another interesting aspect of this depiction is that the empire became split into two political areas, the Western empire ruled from Rome and the Eastern empire ruled from Constantinople. This is consistent with two legs of iron. By 476 AD the Roman empire had disintegrated.

Feet of Iron and Clay

Has Europe remained a divided people since the fall of the Roman Empire?

The answer is clearly yes. Although there certainly have been men who have tried to unite and control it.

Charlemagne and his younger brother Carloman were the children of Pepin the Short, who became king of the Franks in 751. After his father and brother died, 768 and 771 respectively, he inherited the kingdom.  Once in power, Charlemagne sought to unite all the Germanic peoples into one kingdom, and to convert his subjects to Christianity. Soon after becoming king, he conquered the Lombards (in present-day northern Italy), the Avars (in modern-day Austria and Hungary) and Bavaria, among others, see map.

In his role as a zealous defender of Christianity, Charlemagne gave money and land to the Christian church and protected the popes. As a way to acknowledge Charlemagne’s power and reinforce his relationship with the church, Pope Leo III crowned Charlemagne emperor of the Romans on December 25, 800, at St. Peter’s 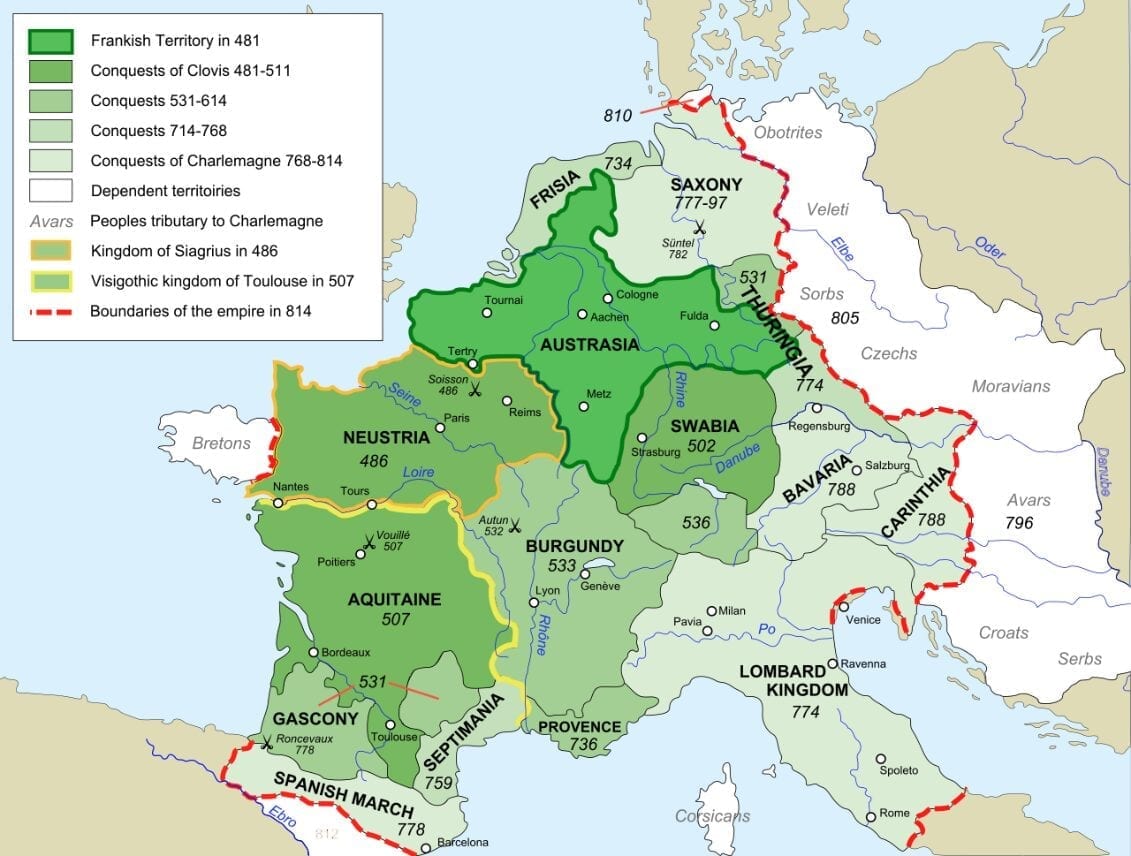 In 813, Charlemagne crowned his son Louis the Pious (778-840), king of Aquitaine, as co-emperor. Louis became sole emperor when Charlemagne died in January 814, ending his reign of more than four decades. At the time of his death, his empire encompassed much of Western Europe. In the ensuing decades, his empire was divided up among his heirs, and by the late 800s, it had dissolved.

Charlemagne’s kingdom was only western Europe and barely lasted 100 years and cannot be compared to the great empires of Nebuchadnezzar’s dream.

In 1206, Genghis Khan, born 1162,  united the mongolian tribes and expanded his area of control to a large part of central asia at the time of his death in 1227.  Under Genghis’s successor Ogedei Khan the speed of expansion reached its peak. Mongol armies pushed into Persia, and eventually took control of all of China in 1279. They also pushed further into Russia and eastern Europe. By 1294 the empire had disintegrated. The Khan empire was truly iron mixed with clay. 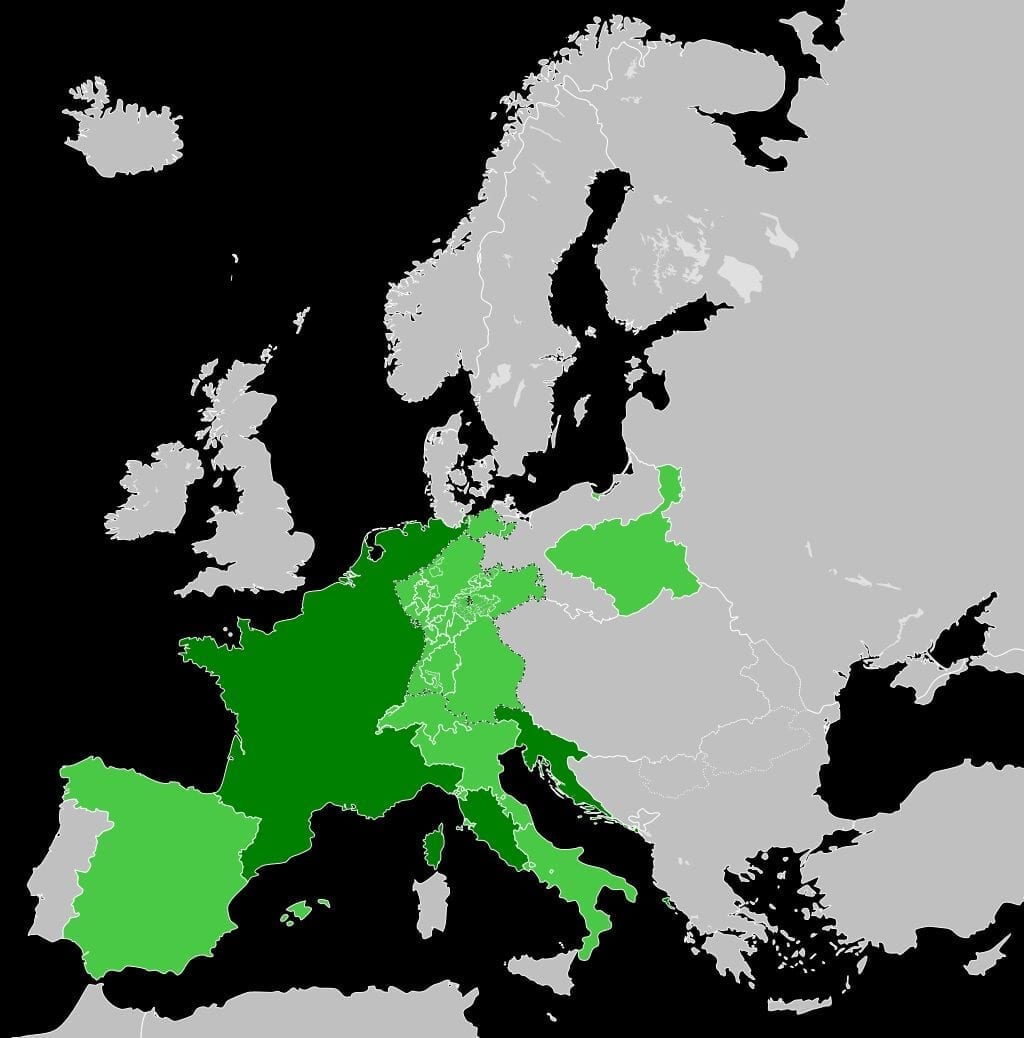 Napoleon rose through the military ranks quickly starting at the age of 15. He was a commissioned officer just after his 16th birthday. In 1792 he was promoted to Captain and then to Commander of the French army in Italy in 1796. By November 1799, he worked to establish a European empire under his military dictatorship. In the years that followed, he took control of a large part of Europe. However, from 1810 the tide turned against him. Paris fell in March 1814, and Napoleon went into exile on the island of Elba. But in February 1815, after less than a year, he escaped, marched on the French capital and victoriously returned to power. This prompted Britain, Prussia, Russia and Austria to declare war. His success was short-lived: he governed for a period now known as the Hundred Days – a brief second reign brought to an end by the battle of Waterloo in June 1815.

Napoleon captured a sizable part of Europe at his height of power as shown, but his hold over it only lasted a few years.

The British Empire expanded during the seventeenth to the nineteenth centuries through trade and occupation. At its height, it was very large with member countries comprising Australia, India and Canada among others. However, no central European or Middle Eastern countries were part of it. But as far as Nebuchadnezzar’s dream is concerned, it would be consistent with iron among clay. 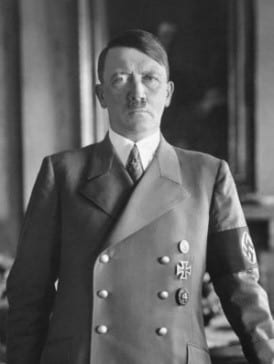 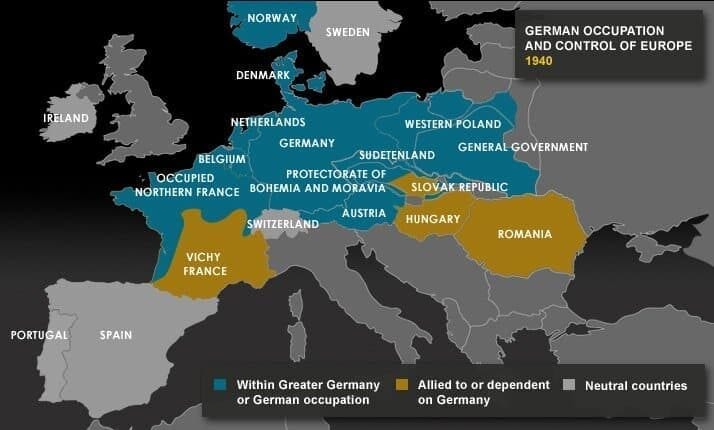 The German dictator attempted to capture all of Western Europe and Russia, but his maniacal reign only lasted six years with an estimated loss of between 75 to 80 million lives.

So, where are we at?

After the fall of the Roman Empire, there has not been a world power that has taken control of Europe and held it like the other powers featured in Nebuchadnezzar’s dream. There has been short-lived and powerful regimes, but these were prophesied by Daniel anyway. 42 As the toes were partly iron and partly clay, so this kingdom will be partly strong and partly brittle. 43 And just as you saw the iron mixed with baked clay, so the people will be a mixture and will not remain united, any more than iron mixes with clay. 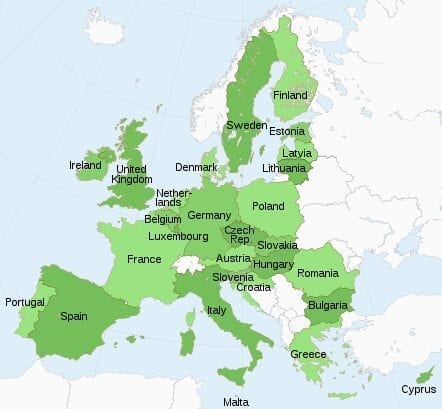 The European Union had its beginning with the Treaty of Rome which was formed in 1957 as an economic union of Belgium, France, Italy, Luxembourg, the Netherlands and West Germany. This grew into to  European Economic Community (EEC) and its final iteration was/is the European Union. It has a single currency and government with its headquarters in Brussels. It has its own flag as well.

Notice the connection with Rome and in Daniel’s prophecy Rome is iron and as we have seen, the last and greatest empire. This iron connection is carried through to the feet which are made of iron and clay and we are told that it will not hold together.

Daniel’s prophecy has been extremely accurate so far over the last 2,500 years, so we can safely expect the EU to fragment.

The Rock uncut by human hands

The very next event on Daniel’s prophetic calendar is for the Rock (Lord Jesus) to come, smash the kingdoms and bring them to an end, but it will itself endure forever. In other words, the fifth kingdom is the eternal kingdom of God, built on the ruins of the sinful empires of mankind and its authority will extend over the whole earth.

There is a widely held view that the book of Daniel is entirely fictional because long-range predictive prophecy is impossible and that it was written no earlier than the Maccabean period of the second century BC. Objective evidence excludes this hypothesis on several grounds:

1 When the liberal theologians claim the book was written, Rome was not a power so they have to make Media and Persia as two empires in order to account for four. Clearly Medo-Persian was one empire and this is confirmed by Daniel; The two horned ram that you saw represents the kings of Media and Persia.[7] The Roman empire make the fourth.

2 The language and words used in Daniel, both the Aramaic and Hebrew clearly do not belong in the second century, but of a much earlier time.[8]

3 The symbolism connected with the fourth kingdom makes it unmistakably predictive of the Roman empire and Rome did not control Syro-Palestine until 63 BC.

4 The dream makes clear that the Roman empire will be the last great kingdom until Christ returns and this has been the case for over 1,500 years.

And remember the Rule of Thumb; Bible critics are always wrong.

Maps in order of appearance

[1] Daniel was one of a group of young Jewish boys taken to Babylon, during the first of three raids on Jerusalem by the Babylonians (605, 597 and 586 BC). The third raid resulted in the total destruction of Jerusalem.