Reasons to Believe the Bible 3 – Creation 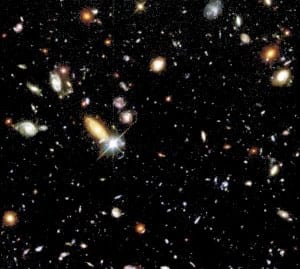 Our universe is highly ordered with galaxies, solar systems, planets and moons, all rotating with perfect symmetry and in harmony. In fact the Greek word for universe is cosmos which means order. Life is incomprehensively complex and every member inter-dependent on other forms of life and its environment in a delicate balance that enables each to survive. For example, if there was no carbon dioxide in our atmosphere there would be no life, if the earth’s orbit around the sun was not close to circular, there would be no life, if our solar system was closer to our galactic centre or further out, no life would exist. There are many such parameters, which, if one was varied only slightly, there would be no life on earth.

Interestingly, a Supernatural Being has contacted us and told us that it was He who created everything. Also, He told us how and in what order He did it; we can read about it in the Bible; Genesis chapters 1& 2. The reason He did it, was because it pleased Him.[2]

What does science tell us?

There are two scientific laws of which there are no exceptions; all of creation must obey these laws. They are the First and Second Laws of Thermodynamics. The First states that the amount of matter plus energy must not change (increase or decrease). This is in keeping with scripture which states that God finished His work of creation after six days. The Second Law (SL) states that for a closed system (that is, no energy or mass is able to enter or leave), entropy (the amount of disorder) must increase. So anything that is left to itself will go to a state of disorder; cars rust, houses become dilapidated, batteries go flat etc. We observe this all of the time and we know that it is true even though the examples given are for open systems, the SL still applies. Conditions can be imposed on a system which gives the impression of it defying the SL such as ordered and symmetrical crystals forming in a saturated solution, but when the whole of the universe is taken into account the SL is maintained.

Let us direct our attention to the universe, which, by definition comprises all of the matter and energy there is. It is therefore nonsense to speak of multiverses or an infinite number of universes if the universe contains all of the matter and energy there is. By definition then, the universe must be subject to the SL and be going from order to disorder. Another way of applying the SL is that the amount of useable energy must decrease while the total energy must remain constant. This means that the universe will end with no motion and with a uniform temperature throughout, it started would up and is winding down. It is shear nonsense or desperation, to say that “nothing” exploded and from that explosion came everything that there is; a perfectly ordered universe which spawned life in all of its variety and diversity as proposed by atheist cosmologists. The SL forbids the transition from chaos (an explosion) to cosmos. The only logical explanation is creation by a Supernatural Being; the God of the Bible.

…You, Lord, in the beginning have laid the foundation of the earth; and the heavens are the works of your hands: They shall perish; but you remain; and they shall grow old as does a garment.