The biblical story of creation is often criticised, with many people, including liberal Christians, insisting that it is not meant to be taken literally, but must be allegorised. Let us examine briefly, how other religions explain how we came into existence so that their account of creation can be compared with that of the Bible. 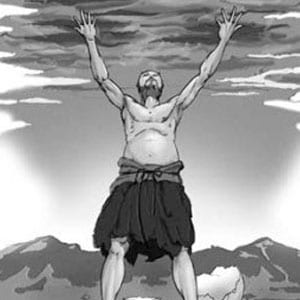 A Chinese creation story tells how Pan Gu was hatched from a cosmic egg. One part of the eggshell formed the heavens; the other part became the earth. For 18,000 years, Pan Gu stood between them, keeping them apart by growing ever taller. Finally he became weary, lay down, and died. From his eyes came the sun and moon, from his hair the stars, from his breath the wind, and from his body the earth.

The Hindu texts known as the Upanishads describe the creation of the world as the breaking of a cosmic egg.

The Aztecs of Mexico believed that the present world was the fifth that the gods had created. It was fated to end in universal destruction by earthquakes. The four previous worlds had been destroyed by a great flood, the falling of the sky, a firestorm, and a windstorm.

The Maya believed that the gods made three unsuccessful attempts to create human beings before achieving a satisfactory result. Their first creations–animals, people made of mud, and wooden people–disappointed them in various ways, and they abandoned or destroyed them. Finally, the gods made people of maize (corn) who were perfect, so perfect that their creators clouded their vision to prevent them from seeing too far.

A Japanese tradition, preserved in a volume of mythological history called the Kojiki, says that before creation, there was an oily sea. Gods came into being in the High Plains of Heaven. After seven generations of deities, there came the first human ancestors, whose task was to make solid land. They stirred the sea with a jewelled spear. Drops that fell from the spear formed the islands of Japan.

A Norse creation story tells how the giant Ymir took shape in the huge icy emptiness called Ginnungagap. Ymir’s great cow licked the ice, creating the first gods, including Odin. The gods killed Ymir and divided his body into a series of worlds on three levels: Asgard, the realm of gods; Midgard, the realm of people, giants, dwarfs, and elves; and Niflheim, the realm of the dead. The gods created the first man and woman from an ash and an elm tree.

According to Polynesian tradition, a creator god named Tangaloa sent a bird messenger over an endless primal sea. At last Tangaloa threw a rock into the sea so the tired bird would have a place to land. Then the god created all the islands in the same way. The bird made the first people by giving arms, legs, hearts and souls to maggots. It is easy to see that these creation stories were devised by man. Now let’s compare them with the biblical account of creation.

The account of creation appears in the first chapter of the first book of the Bible; Genesis. The narrative is detailed and the act of creation is attributed to God in its entirety. It was accomplished in six days. It was orderly and highly structured, with each day having its own acts of creation and a start and finish that is: morning and evening. Each day was completed before the next act of creation was started. It is a logical sequence of events with the pinnacle of creation being man—the only being created in the image of God.