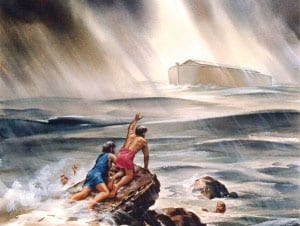 Of all the parts of scripture, it is Noah’s Flood that has come in for some of the most criticism. So let’s look at it in detail. But before we look at the evidence that supports a worldwide flood, we will cover some of the background.

Almost all civilisations have a flood story as a legend or folklore in their culture. Evolutionary geologist Robert Schoch who studied such things, wrote:

Noah is but one tale in a worldwide collection of at least 500 flood myths, which are the most widespread of all ancient myths and therefore can be considered among the oldest.[1]

Not only are flood stories ubiquitous amongst ancient civilizations, they are remarkably similar. James Perloff noted:

So much recorded history of a worldwide flood, originating from diverse civilizations, points to the conclusion that it actually happened.

The reason for the Flood

The Sons of God saw that the Daughters of Men were beautiful and they married any of them they chose (verse 2). These unions produced only males who were called Nephilim (verse 4). The key to understanding where the Nephilim came from is the word afterward (after that) in verse 4 and the most logical explanation is the reading; when the sons of God went to the daughters of men and afterward they bear children to them and there were Nephilim on earth…. . God saw the wickedness of man was great and that every inclination of the thoughts of his heart was only evil continually (verse 5). So God waited 120 years (verse 3) before He destroyed all life, except for Noah and his family (verses 7 and 8).

Who were the Sons of God?

The Hebrew which has been translated as “Sons of God” is bene Elohim and it appears five times in the Bible; twice in Genesis chapter 6 and three time in Job (1:6, 2:1 and 38:7) and in the Job citations it is a reference to angels, which is reasonable because they were created directly by God in the same way Adam is referred to as a son of God (Luke 3:38) because God created him supernaturally. In the New Testament, Christians are referred to as “sons of God” (Romans 8:14 and Galatians 3:26). This is because we have been born again and are a new creation (2 Corinthians 5:17).

Further evidence for the fact that the “Sons of God” were angels comes from the Hebrew benoth adam, which is translated as “Daughters of Men”. If the sons of God were human the Hebrew bene adam would have been used instead of bene Elohim.

So there is good reason to believe that the name, Sons of God is referring to angels and from the tenor of the text; fallen angels. The idea that they were fallen angels was held by the translators of the Septuagint (the Greek translation of the Old Testament around 250 BC) as well as Josephus and early Christian writers.

In every biblical account where angels are manifest in physical form, they appear as men, eg Michael and Gabriel.

Who were the daughters of men?

There seems to be no reason to look any further than what the text says that they were simply daughters of the people who inhabited the earth at that time.

Who were the Nephilim?

In answering the question we do not need to deviate from what the text states; they were the progeny of the sexual union of the “Sons of God”; fallen angels and the “Daughters of Men”. The text tells us that they were Mighty men, men of renown. The name Naphilim is a Hebrew word and in many Bibles it has been left untranslated, but its literal meaning is “fallen ones,” from the Hebrew root word naphal, meaning “to fall or to be cast down.” This being the case, why would these offspring of human mothers be automatically condemned by God and regarded as fallen? Being born into an ungodly family by unbelieving parents does not mean that one is excluded from the promises of God that arise from faith in Him.

It is possible that the Nephilim were condemned because they were not fully human; if they were the progeny of fallen angels and humans. Now at this point you may be wondering how it would have been possible for angels to procreate with human women. Well, the three angelic beings who visited Abraham appeared in human bodies, spoke with him, sat, had their feet washed and ate with him. This demonstrated that their limbs, voice, digestive system etc were working well; therefore we can safely assume that all parts of their bodies were operational.[3]

Flood stories are ubiquitous amongst ancient people. This is to be expected if it actually happened.

God destroyed all air-breathing life because fallen angels had procreated with human women which produced Nephilim who were not part of God’s original creation and plan (Genesis 2:24). As well, they were continually evil.

[3]Most of the above analysis of Genesis 6:1-5 has been taken from: Gary Bates, Alien Intrusion, Creation Book Publishers, 2011, Appendix.