Sedimentary rock is formed by the laying down of sediments by water. These sediments are made up of tiny pieces of rock or other material which existed somewhere else and were eroded or dissolved then redeposited in their present location. Seventy-five to eighty percent of the earth’s land area is covered by sedimentary rock which has been laid down by water, in a thin veneer over the earth’s crust; the rest is volcanic igneous rock from volcanic eruptions.[1]

Many sedimentary layers comprise limestone, sandstone and shale. One particularly obvious sedimentary layer is the coal-bearing Upper Carboniferous, this consists of large coal deposits derived from vegetation. It also contains the remnants of uprooted trees in a variety of positions. All of this is consistent with a large flood dump. As a noted geology professor observed:

The extensive coal and associated deposits of the Upper Carboniferous are almost incredibly widespread, from the American Midwest to the Donetz Basin in what was (until recently) the former Soviet Union.[2]

Other large layers include the chalk beds of southern England, the enormous sandstone layer containing the Australian Great Artesian Basin which runs continuously for thousands of kilometres, and the extensive coal beds of eastern Australia that contain millions of fossilised trees which give the appearance of having been dumped there. All the layers mentioned contain mixtures of land-based vegetation and marine fossils. Again, consistent with a worldwide flood. 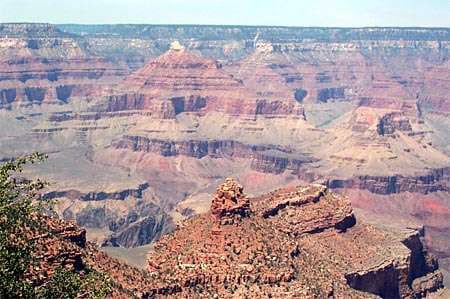 In many places, the upper crust of the earth consists of a series of sedimentary layers built upon a basement of metamorphic rock. Their meeting is easily seen, for example, in the lower section of the Grand Canyon where the junction is called The Great Unconformity. Here, a sediment layer sits on a widespread, water-eroded surface and in some places is 1.8 km thick. Similar examples can be seen on many continents. The water activity that produced the erosion of the metamorphic rock would have had to have been powerful and a global phenomenon.

If Noah’s Flood really happened, then the earth would have to have been covered by rock laid down by water (sedimentary rock) and this is what we see.