All matter consists of atoms which are the smallest matter can be reduced to except for sub-atomic particles. Atoms comprise a central nucleus containing positively charged protons and neutrons with negatively charged electrons moving around the nucleus as shown. The number of protons in the nucleus is balanced by the number of electrons so that the atom is electrically neutral. The number of protons determines the type of element. For example, carbon contains 6 protons, iron 26, iodine 53, uranium 92 and so on.

The electrons can occupy different energy levels as they spin around the nucleus. They can absorb radiation at very discrete wavelengths (energy) and move to higher energy levels. As a result of these transitions, each element can have several absorption lines in light passing through that element and their position is unique and characteristic for that particular element. For the hydrogen atom, the main absorption line is at 656 nm. So if light is broken into its component wavelengths and there is no light at 656 nm, then we can safely assume that the light has passed through hydrogen as shown. Also shown (below) are the absorption lines in the visible part of the spectrum for other elements. 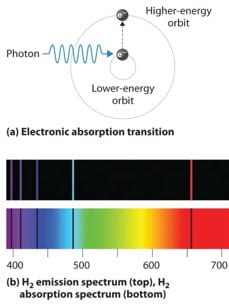 It is possible to predict where the absorptions will occur by using the Periodic Table. In fact helium was discovered in the sun, by examining the light emanating from the sun before it was found on earth.
The overall nuclear reaction that is taking place in suns is the combining of two atoms of hydrogen to form one atom of helium; this is known as nuclear fusion. So any light coming from distant suns will always have absorption lines of both hydrogen and helium at least.

Galaxies comprise mainly clusters of suns of about 100 billion in each, and are mainly present in two forms: spiral and disc, examples of which are given below. 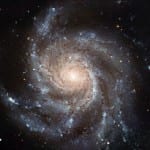 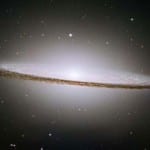 From astronomical distances, galaxies appear as single spots and as discussed, the light from them will contain hydrogen absorption lines.
Almost 100 years ago and using the Lowell Observatory (USA), Vesto Slipher was able to measure the wavelengths of light coming from our closest galaxy Andromeda, and found that the hydrogen absorption line was not at 656 nm but had shifted by 0.1% to the blue end of the spectrum. (1)
By 1925 astronomers had measured wavelength shifts of 45 galaxies and the reason for the shifts was thought to be due to the Doppler Effect which is the change in frequency of emitted sound or light by the moving object that is emitting the sound or light. As shown in the sketch of a girl walking her dog, and as an ambulance passes her the frequency of the sound of its siren changes from a higher pitch to a lower pitch as shown by the lines in the sketch. 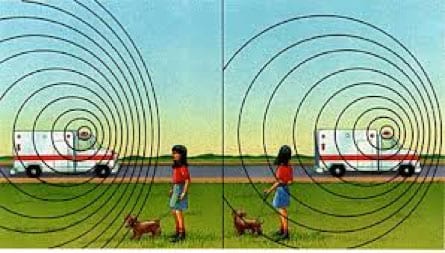 In 1924 Edwin Hubble began to use the 100 inch reflector telescope at the Mount Wilson observatory (USA) and after measuring the red shifts of many galaxies, he noticed a pattern emerging, the more distant galaxies had the greatest red shifts, that is, they were moving faster. In 1929 he published his results in which he stated his now famous Hubble’s Law which says that some cosmic phenomenon causes redshifts to tend to increase in proportion to distance from the earth. (2) An illustration of this phenomenon is given by a group of people walking along a path. If all of the people started walking from the same point at the same time, then after a period of time, say half an hour, the people at the front would have been walking faster and the people at the back would have been walking more slowly. 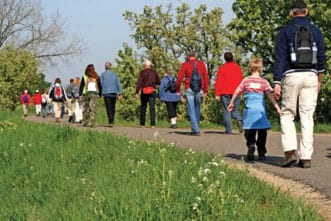 So in the case of galaxies what is moving, the galaxies or the space which contains them? In the illustration given below both the motorboat and the surfboard rider are moving. In the case of the boat, it is the boat which is moving across the water. However, the surfboard rider is being taken along by the sea. Most astronomers are of the opinion that it is the space that is expanding and taking the galaxies with it. 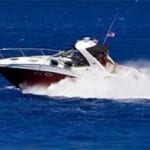 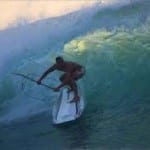 What does the Bible say in relation to the heavens? Fourteen verses state that God stretched out the heavens. (3)
The Hebrew word shamayim has been translated as “heavens”, and has the meaning of; the higher ether (space) where the celestial bodies move. (4) The Wycliffe Bible Dictionary describes heavens as the vast realm in which are the sun moon, the planets and the stars. So it would appear that when the Bible refers to God stretching out the heavens, it is the space containing celestial bodies that is being stretched. 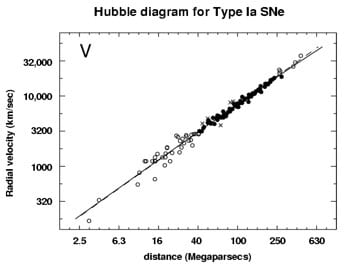 To summerise to this point, Vesto Slipher was able to separate the light from our closest galaxy Andromeda into its component wavelengths and found that the hydrogen absorption line had shifted to a slightly lower wavelength (656 nm to 655.3 nm). Hubble took this further and measured the position of the main hydrogen absorption line for many other and more distant galaxies and found that it had shifted to the red end of the spectrum for all of them. The shifts were thought to be due to the Doppler Effect. After further observations he discovered that the furthest galaxies had greatest redshifts, in fact he discovered that the galaxy’s redshift was directly proportional to its distance from the earth and this is his now famous Hubble’s Law, see the accompanying graph (redshifts are in the form of velocities). 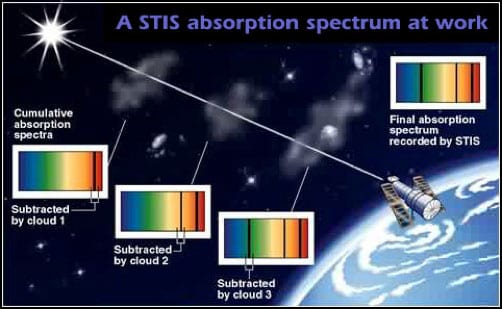 The Hubble telescope can now photograph galaxies as far as 15 billion light years away. There are hundreds of billions of galaxies spread out over this distance and the average galaxy is about twelve million light years from its nearest neighbour.
Apart from Andromeda which is moving towards us because of the gravitational pull between it and our own Milky Way galaxy; all other galaxies are moving away from us. What does this tell us about our position in the universe? What do you think? The most obvious answer is that we, that is, our Milky Way galaxy, is at the centre of the universe.

However, there is another model which could explain the same observations which is that of an expanding space like a balloon being inflated and all the galaxies are on the surface as shown. Again, all galaxies would be moving away from each other. This is the Big Bang model. But it has serious problems; it reduces space to two dimensions that is, to the surface of the balloon and it requires 96% of all matter and energy to be Dark Matter and Dark Energy. That is, they cannot be observed or detected and are only included to make this model work. 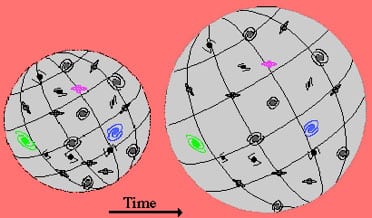 The Big Bang theory has many other problems; even the weekly journal, New Scientist, has discarded it. (5) One cosmologist, Eric Lerner, who is president of Lawrenceville Plasma Physics in West Orange, New Jersey, is reported as saying:
This is not science. Big Bang predictions are constantly wrong and are being fixed after the event.
Another, Joao Magueijo, of Imperial College, London, says:
The standard model is ugly and embarrassing; I hope it will soon come to breakdown point.
The situation was so serious that 50 astronomers and physicists met in Port Angeles, Washington, USA, on September 7–11, 2008, to discuss an alternative to the theory. All agreed that it needed to be replaced, but nobody could devise a satisfactory alternative. (6)
The problem still exists with theoretical scientists going well ahead of experimental observations and this was the subject of a conference called by the Perimeter Institute in Waterloo, Canada from June 20-24, 2015. They addressed the problem of why 96% of the universe appears to be missing and one delegate, Maria Spiropulu stated; “Dark matter is the biggest problem in physics today.” (7)
The big dilemma for atheists is that they cannot tolerate the idea that the earth has a very special place in the universe because it is powerful evidence for creation. Yet this is what the observations and measurements show.

In the early 1970s William Tifft using the Steward Observatory in Tucson Arizona, noticed these redshifts were in groups with spacings of 0.024%. The spacings are about 72 km/s when it is expressed in terms of Doppler shift and after more studies, he published his results. (8, 9, 10) The same pattern was confirmed when the radio wave region of the electromagnetic spectrum was examined rather than the visible light and in a publication in 1984 he stated;
There is now very firm evidence that the redshift of galaxies are quantized with a primary interval of near 72 km/s. (9)
In 1997 an independent study of 250 galaxy redshifts by William Napier and Bruce Guthrie confirmed Tifft’s basic observations stating:
— the redshift distribution has been found to be strongly quantized in the galactocentric frame of reference. The phenomenon is easily seen by eye and apparently cannot be ascribed to statistical artefacts, selection procedures or flawed reduction techniques. Two galactocentric periodicities have so far been detected, ~ 71.5 km s-1 in the Virgo cluster, and ~ 37.5 km s-1 for all other spiral galaxies within ~ 2600 km s-1 [roughly 100 million light years]. The formal confidence levels associated with these results are extremely high.’ (11)
Measurements using the Hubble Telescope show similar clustering out to distances of billions of light years. (12)
The notion of quantised redshifts of galaxies with our galaxy as the point of reference is shown pictorially below as our galaxy being surrounded by consecutive layers of galactic shells. That is, the whole cosmos wraps around us. 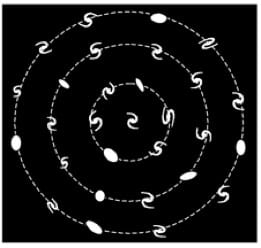 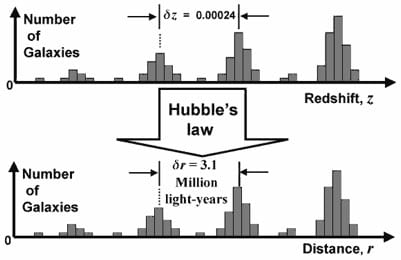 These findings have been in scientific journals now for about 25 years where they have been open to peer review, but the fact that our galaxy (The Milky Way) is at the centre of the universe and all of the other galaxies form shells around it still stands.
The idea (supported by masses of observational data) that the galaxy that contains our solar system is at the centre of the universe and all other galaxies are spread around it in even concentric layers is compelling evidence for creation by the God of the Bible as stated in Genesis chapter 1. Also, it helps in the understanding of the order of creation with God creating the earth first, filling it with vegetation and then creating the sun and the moon and then the rest of the cosmos on day four. Day and night before the creation of the sun and moon could have been achieved by a rotating earth with a point source of light shining on it and we are told that God is the source of light (Revelation 21:23).
The centrality of the earth within the cosmos is consistent with the centrality of the earth within scripture and all other heavenly bodies are subordinate to it.
Our galaxy is just a pin point on the cosmological scale and our earth is within this pin point so it is not an exaggeration to say the earth is at the centre of the universe.

Most, but not all, of the above work came from Dr Russell Humphreys article; Journal of Creation, August 2002, 16(2), 95-104. More information about this subject is contained in his book; Starlight and Time, available from Creation Ministries International at creation.com.

[1]V.  Slipher The radial velocity of the Andromeda nebula, Lowell Observatory Bulletin, No 58, 1914.