If you were to take a bottle or a jar, fill it to about one third with soil and sand, fill it to about two thirds with water, shake it vigorously and then allow it to stand, over the days and weeks layers will form as the particles settle to the bottom. Particles with similar size, shape and density will accumulate to give stratified layers. We see the stratification of sedimentary rock all over the globe; the Grand Canyon being a very good example.

Stratification can happen quickly as our little experiment will show. On Sunday, May 18, 1980 the entire

north face of Mount St Helens in the state of Washington USA weakened by a series of earthquakes, slid away, creating the largest landslide ever recorded. This suddenly exposed the partly molten, gas and steam-rich rock in the volcano to lower pressure. At the same time, snow, ice and several entire glaciers on the volcano melted, forming a series of large volcanic mudslides that reached as far as the Columbia River, nearly 80 km to the southwest. The accompanying photograph, courtesy of Dr S Austin, shows stratified sediment which was formed in about one weak.

The bending of strata 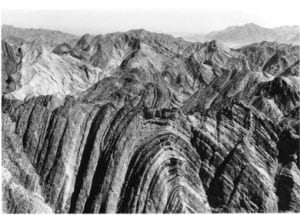 Some strata contain very sharp, almost hairpin bends, as shown in the accompanying photograph. Other strata have bends and folds so great that they can only be perceived from the air to obtain perspective.

Such bending could only have occurred when the entire set of strata was still wet, soft and therefore supple; otherwise the layers would have cracked and even broken—and there is very little evidence of such cracking and breaking in the strata. Concrete for example, when it is wet, it is pliable and can be shaped, but once it has set any attempt at bending will cause it to break. The forces required to produce this type of bending which is seen repeated across the globe, must have been immense and would have involved the whole of the Earth’s crust and could only have been formed in a single event. 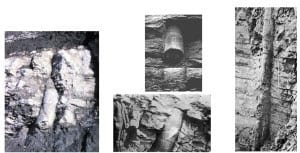 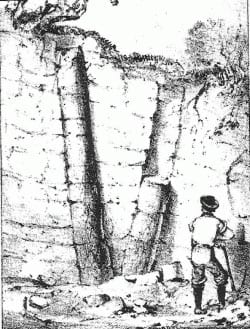 Evidence of the formation of sedimentary layers containing strata being a single event comes if the form of polystrate fossils. These are fossils of mainly the remains of trees but in some cases animals, that transverse many strata and there are literally thousands of example spread throughout the world. These have been documented for some time.

This image is taken from an old print of two tree trunks that appear to be in a growing position at Nant Llech in the Valley, South Wales. Derek Ager, Emeritus Professor of Geology, University College of Swansea, stated that one estimate of the age of the strata these trees pass through is 100,000 years, which, he concludes, is ridiculous.[1]

Tens of thousands of polystrate fossil trees have been found and they are scattered across the globe. The other photographs are just some of many images of the numerous examples. It is very clear that these trees transverse many strata. 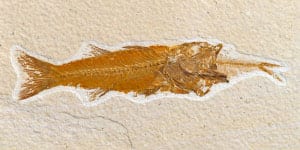 The cataclysmic events of Noah’s Flood with the “fountains of the great deep burst forth” and huge tsunamis transversed the globe ripping vegetation from the land and gouging enormous volumes of soil from the surface in a moving wave of mud. Under such circumstances creatures can be engulfed so rapidly that they are frozen in time. Two examples are given below: A mother ichthyosaur giving birth to her baby and a fossilised fish about to eat another fish.

Only a worldwide flood could account for such geographical features.