The Miracle of Dunkirk

The year was 1940 and the mighty German war machine was crushing all before it. Hitler had annexed the Sudetenland, and by May 15 the German army had taken/occupied Czechoslovakia, Austria, Denmark, and Poland and within a month, Belgium and Norway would surrender.

On May 10, Army Group B, under Generalloberst Fedor von Block (26 infantry and 3 armoured divisions), attacked into Belgium. In anticipation of an attack, the French built a series of concrete pillar boxes which was known as the Maginot Line. The British had sent the British Expeditionary Force (BEF); a large contingent of troops, 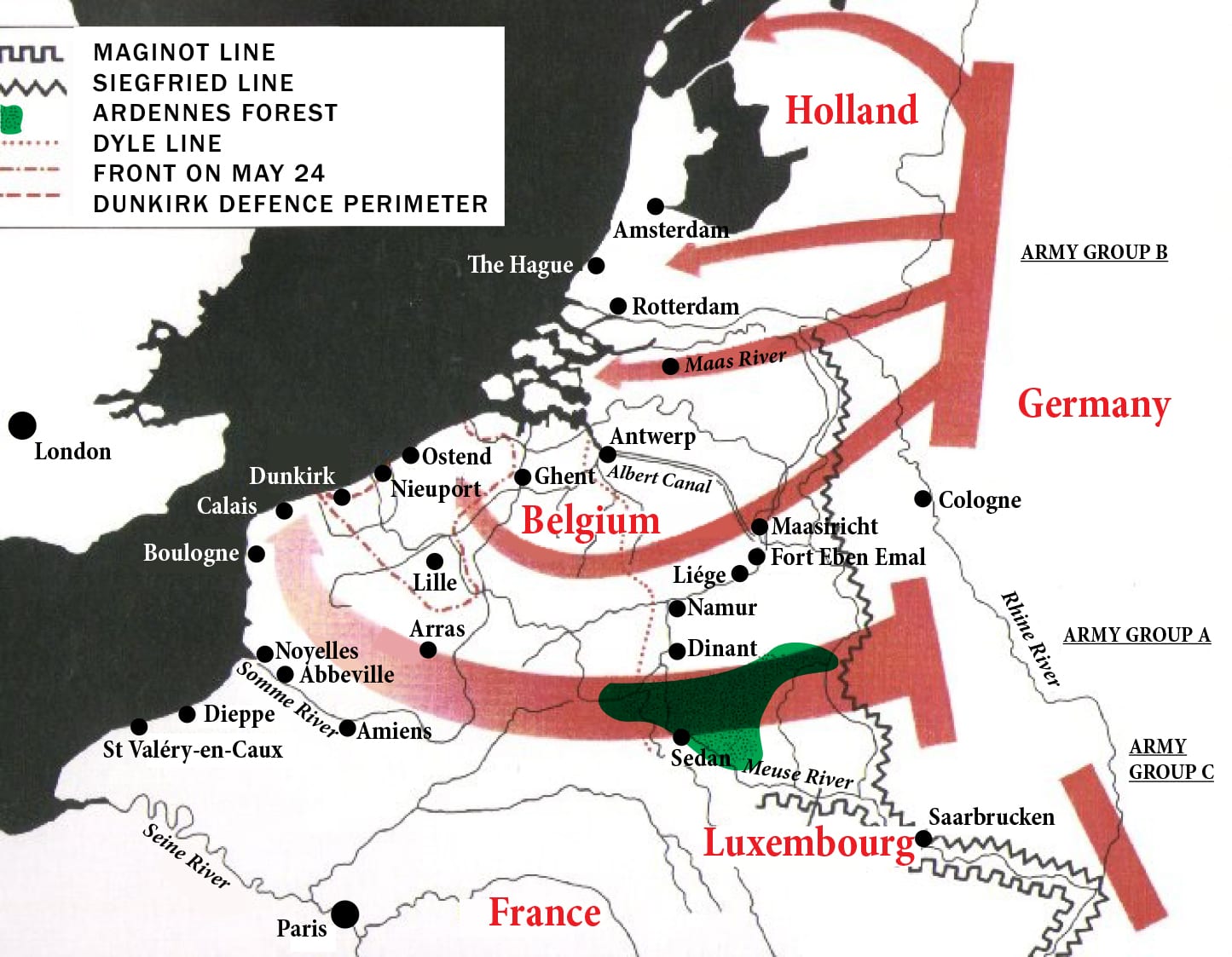 to aid the French. With breathtaking speed Army Group A under Generaloberst Gerd von Runstedt (38 infantry and 7 armoured divisions) using his three Panzer divisions swung around to the south circumventing the Maginot Line and drove for the Channel attacking through the wooded hills of the Ardennes where nobody expected and came from behind the allied forces and drove them to the sea. As well, this manoeuvre prevented allied relief from Belgium and Flanders leaving a third of a million men comprising the BEF, three French divisions and the remains of the Belgium forces, trapped between the advancing German army and the sea. Directive No 13 issued by the German Supreme Headquarters on May 24 called for the annihilation of the French, English and Belgian forces in the pocket (Dunkirk) while the Luftwaffe was ordered to prevent the escape of the English forces across the channel.[1]

On May 25, the War Office made the decision to evacuate the British forces from Dunkirk because it had sandy beaches and even though its harbour was destroyed, it had two sea walls called East and West Moles extending out into the sea from which troops could board larger vessels. It was called Operation Dynamo. A very risky operation as men and boats were very venerable to air attack. Churchill later wrote in his book; I thought—and some good judges agreed with me—that perhaps 20,000 or 30,000 men might be re-embarked. The whole root and core and brain of the British army… seemed about to perish upon the field, or be led into ignominious and starving captivity[2]. Others in the War Room were considering a conditional surrender to Germany.

The May 1940 War Cabinet Crisis was a confrontation between Winston Churchill, newly appointed as the Prime Minister of the United Kingdom, and Viscount Halifax the Foreign Secretary, which took place between 25 and 28 May. Halifax believed that in view of the successful German invasion of France and the encirclement of British forces at Dunkirk the United Kingdom should investigate the possibility of a negotiated peace settlement with Adolf Hitler. However, Churchill’s view prevailed.

But Britain had a godly King. In a broadcast to the nation on May 24, George VΙ informed the people of the gravity of the situation and instructed the people to turn back to God in a spirit of repentance and plead for Divine help. He then announced that Sunday May 26, would be a National Day of Prayer. The

people responded in overwhelming numbers, churches were full to overflowing from one end of the country to the other, even Empire countries prayed.

Click the following link for 38 seconds of film of the crowds outside Westminster Abbey; https://www.youtube.com/watch?v=1zbUqeYnyxw

The Daily Telegraph wrote on July 8, 1940: Those who are accustomed to the Channel testify to the strangeness of this calm; they are deeply impressed by the phenomenon of nature by which it became possible for tiny craft to go back and forth in safety.

A total of 338,226 men were snatched from the jaws of death or imprisonment, in many cases this meant death as well. The allies did experience losses; six British and thee French destroyers were lost. A total of 68,111 men of the BEF were captured, wounded or killed during the whole operation involving British troops in France and 126 merchant seamen died during the evacuation.[5]

On reflection, the Bishop of Chelmsford, Dr H A Wilson wrote; If ever a great nation was on the point of supreme and final disaster, and yet was saved and reinstated it was ourselves…. it does not require an exceptionally religious mind to detect the Hand of God.

Churchill was so amazed by the success of the evacuation that he called it a miracle of deliverance.

So grateful was the nation for this mighty deliverance that Sunday, June 9, 1940 was declared a Day of National Thanksgiving. On the eve of that day, C. B. Mortlock stated in an article in The Daily Telegraph that; the prayers of the nation were answered, and that the God of hosts himself had supported the valiant men of the British Expeditionary Force.

There were more National Days of Prayer, in fact the people of England prayed throughout the whole War. During 1941 it looked as though Britain was going to lose; London and major manufacturing cities were bombed flat, German U Boats were sinking allied ships faster than they could be built, Germany had taken all of Europe and North Africa, but the people of Britain continued to call upon Almighty God for deliverance. Three things happened; Hitler decided to attack Russia (June 22, 1941), thereby greatly expanding his front and having to re-deploy troops from where they were fighting and lengthened his supply lines. Japan attacked Pearl Harbour (December 7, 1941) which brought America into the war, before which, despite frequent requests from Churchill, the people had no appetite to enter another “European war.” Once America cranked up its enormous war manufacturing capabilities the end was inevitable. And thirdly, Italy surrendered on September 3 1943 which effectively removed almost one million soldiers from fighting.

It is amazing what happens when a nation turns to God.