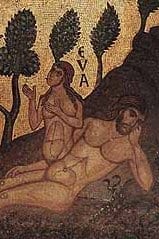 21 So the Lord God caused the man to fall into a deep sleep; and while he was sleeping, he took one of the man’s ribs and then closed up the place with flesh. 22 Then the Lord God made a woman from the rib he had taken out of the man, and he brought her to the man.

“This is now bone of my bones
and flesh of my flesh;
she shall be called ‘woman,’
for she was taken out of man.”

24 That is why a man leaves his father and mother and is united to his wife, and they become one flesh.

Why did God create Eve?

As the narrative of God’s work of creation proceeds as recorded in Genesis chapter one, each act of creation is followed by the phrase; and God saw that it was good. Genesis chapter two then focuses on the creation of man and woman and after God created Adam from the dust of the ground there is the statement; it was not good (verse 18) and this is in respect to Adam being alone. After God had paraded all of the animals before Adam, a suitable helper (companion) was not found. Without female companionship and a partner in reproduction, man could not fully realise his humanity. So God creates Eve and He brings her to Adam who says:

This is now bone of my bones and flesh of my flesh; she shall be called woman for she was taken out of man.

And God institutes the covenant of marriage with the following words:

For this reason a man will leave his father and be united to his wife, and they will become one flesh.

That is, one man and one woman united in the single bond of marriage for life.

Why did God create Eve from Adam?

One reason which John Calvin gives is: If the two sexes had proceeded from different sources, there would have been occasion either of mutual contempt, or envy, or contention. And he went on to say that: Something was taken from Adam, in order that he might embrace with greater benevolence, a part of himself.[1]

However, there is a significant theological reason, it was necessary for both Adam and Eve to be of one blood. This would not be the case if Eve was created from the dust of the ground, as was Adam, the animals and the birds. After Adam and Eve’s fall (their rejection of God’s command not to eat the fruit from the Tree of Knowledge of Good and Evil[2]) they died, eventually physically, but initially spiritually (spiritual death is separation from God) and this penalty of death was on all their descendants. The only way this could be reversed is for someone who had never sinned to pay the price of this penalty which was death, by dying Himself. Jesus Christ (God the Son) is the only one who could pay that penalty; only He could be their redeemer.[3]  A redeemer is someone who pays the price to release someone from bondage. Jewish law proscribes that a redeemer must be a blood relative of the person who is being brought back from slavery hence the title, Kinsman Redeemer and the redeemer himself must be free of that debt and bondage.[4] As well, the writer of Hebrews (2:11-17) makes clear that Jesus must be of the same family as those He saved:

Both the one who makes men holy and those who are holy are of the same family. So Jesus is not ashamed to call them brothers (verse 11).

Boaz was Ruth’s kinsman redeemer (Book of Ruth, but 2:1 in particular) because he was a blood relative of Ruth’s father-in-law Elimelech. Jewish law[5] required the nearest blood relative to marry a woman left to widowhood; to redeemer her from that perilous situation and to continue her husband’s name.

For Christ to be able to redeem the penalty for everyone’s sin, everyone has to be of the same blood so Eve could not have been created separately from Adam.

Why did God create Eve from one of Adam’s ribs?

The rib[6] bone is the only bone in the human body that will grow again if it is removed, providing the periosteum (outer membrane or sheath) is left intact. A good illustration would be to remove a banana and leave the skin intact. Surgeons often use a rib, or part thereof, if bone is required in another part of the person’s body and the rib will regrow. Regrowth has been shown to take about three months to be completed with the rib being at full strength.[7]

Another reason why God would have used a rib to form Eve is that bone marrow contains stem cells, which are cells that can convert into all the other types of cells in the human body. Rib bones are particularly rich in stem cells.

Many skeptics have poured scorn on the Genesis creation account and many others have said that it is purely allegorical, but it is consistent with modern science.

A fitting comment to conclude is by the seventeenth century Bible commentator; Matthew Henry:

The woman was made of a rib out of the side of Adam; not made out of his head to rule over him, nor out of his feet to be trampled upon by him, but out of his side to be equal with him, under his arm to be protected, and near his heart to be beloved.

[6] The Hebrew word, tsela translated as “rib” actually means “side.” However, the context in which it is used is “one of many” and Adam states it was a bone, so rib fits perfectly. As well, the Hebrew compositors of the third century Septuagint (the translation of the Hebrew scriptures into Greek) translated tsela as the Greek word pleura which means “side” or “flank” or “rib”, but it is used in the Genitive Plural, that is, one of many, again signifying rib.