Lachish was a very important Jewish city located 40 Km (30 Miles) south west of Jerusalem. It fell in 701 BC to the Assyrians under their king Sennacherib who had a wall panel constructed to depict his conquest of Lachish. This resides in the British Museum. Lachish was re-built only to be laid waste again by the Babylonians in 586 BC. Now its ruins, known as Tel Lachish, comprising 18 acres, making it the largest archaeological site in Israel, has been excavated for the last 80 years. The first archaeological excavation was by a British team led by James Starkey in the 1930s. This was followed in 1966 and 1968 by noted Israeli archaeologist Yohanan Aharoni. From 1973-1994, an expedition from Tel Aviv University led by David Ussishkin excavated the northern side of the large main entrance gate complex, where they revealed that the gatehouse contained six rooms and is dated to the First Temple Period.[1] The size of the gate is not surprising as the Bible tells us that the city’s judges and elders sat at the Gate.[2] Ussishkin excavated the three northern rooms of the gatehouse, attributing the gate to the eighth or ninth centuries BC. He then decided to leave the southern side of the gatehouse to future generations to explore. See image below. 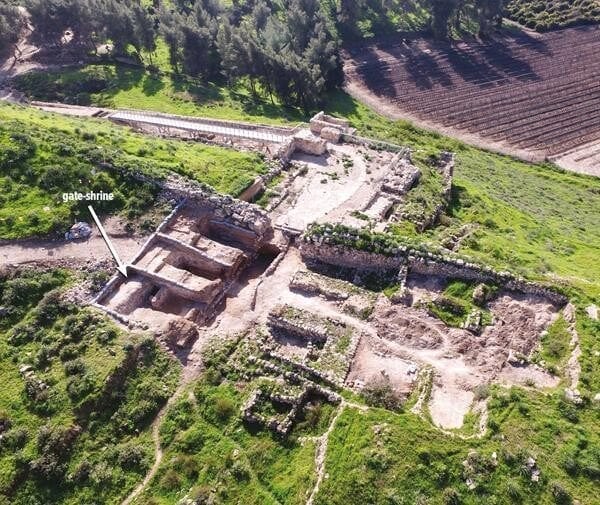 Almost forty years later, archaeologists Saar Ganor and Igor Kreimerman from the Israel Antiquities Authority (IAA) excavated the remaining three rooms and they found one was used as a shrine for the worship of gods. This is not surprising because king Josiah of Judah; broke down the shrines at the gate—at the entrance to the Gate of Joshua, the city governor, which is on the left of the city gate.[3] The director of the IAA excavation, Saar Ganor, described what they found: Steps to the shrine gate in the form of a staircase ascended to a large room where there was a bench upon which offerings were placed. An opening was exposed in the corner of the room that led to the holy of holies; to our great 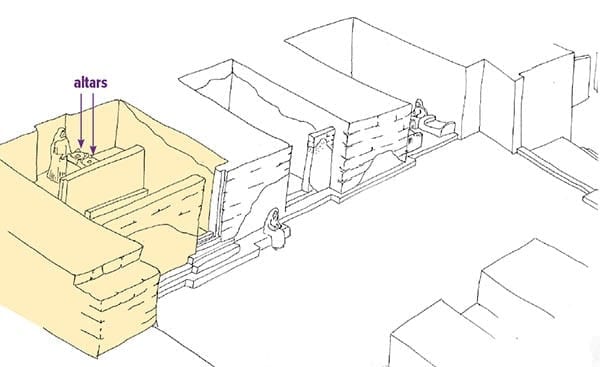 excitement, we found two four-horned alters and scores of ceramic finds consisting of lamps, bowls and stands in this room.[4] See the schematic provided by the IAA. Other items discovered included jar handles labelled: “Imlk” (belonging to the king) with a depiction of a four-winged scarab (beetle), both of these markings are commonly associated with the reign of Hezekiah as they have been found in other excavations of this time period.[5] (see: https://www.adefenceofthebible.com/2016/01/02/archaeology-5-king-hezekiahs-seal-found)

Most surprising of all was the discovery of a seat carved of stone with a hole in the centre and what the archaeologists describe as a toilet. This latrine was unquestionably a form of desecration of the shrine room. When Jehu killed king Ahab’s son Joram, all his family and all those associated with his kingdom, he tore down the temple of Baal and the Bible goes on to state; They demolished the sacred stone of Baal and tore down the temple of Baal, the people have used it for a latrine to this day.[6]

The images below, compliments of Biblical Archaeology Review, show the toilet as found, and the two archaeologists removing it. 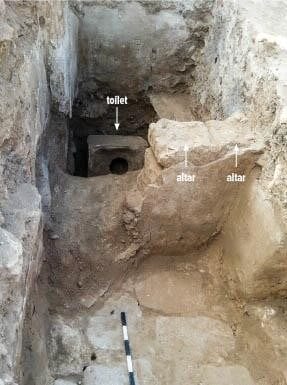 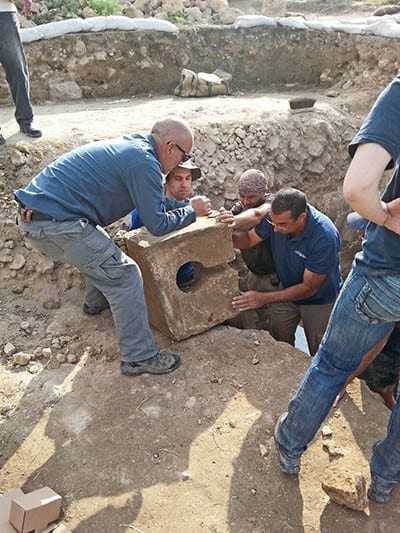 About 100 years after Jehu’s actions, the godly king of Judah, Hezekiah did as the Bible states: He did what was right in the eyes of the LORD, just as his father David had done. He removed the high places, smashed the sacred stones and cut down the Asherah poles.[7] The archaeologists noticed that the horns of the altars were broken off, a clear sign of desecration and believe that the placement of the toilet in the shrine’s holy of holies, was part of Hezekiah’s campaign to remove the high places as a place of pagan worship.[8]

Analyses of the toilet showed that it had never been used. However, it served its purpose of desecrating the shrine. Even in minor incidents such as this, so easily glossed over during a reading, such as 2 Kings 10:27, have been shown by archaeology to have actually happened.