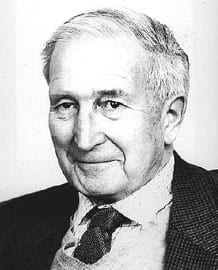 Antony Garrard Newton Flew was born on February 11, 1923 in London. He was the son of a Methodist minister and he was educated in the Christian boarding school, Kingswood in Bath. At the age of 15, he decided that the concept of God being good was incompatible with the evil in the world and so he adopted atheism. He served in the RAF as an intelligence officer during World War 2. After the war, he attended Oxford University and graduated in Philosophy with First Class Honours. As well he was awarded the University Prize in Philosophy in 1947.

As an undergraduate at Oxford he joined weekly meetings of the Socratic Club, a forum for debate between atheists and Christians, which was chaired and founded by the Christian apologist; C S Lewis. It was for this meeting that he wrote, Theology and Falsification (1950), which argued that claims about God were merely vacuous because they could not be tested for truth or falsehood. Though initially published in an undergraduate journal, that article created enormous attention and it is reputed to be the most frequently referenced philosophical publication of the second half of the twentieth century.

Flew quickly became a prominent figure in the philosophy of religion and a popular intellectual spokesman for atheism. His books such as God and Philosophy (1966; reissued 2005), The Presumption of Atheism (1976) and Atheistic Humanism (1993) provided articulate expositions of atheistic principles that won a wide popular as well as academic following. Flew’s writings influenced later atheists such as Richard Dawkins and Sam Harris, who wrote for popular as well as academic audiences. He was the author of some 23 works of philosophy, including God and Philosophy (1966), Evolutionary Ethics (1967), An Introduction to Western Philosophy (1971), The Presumption of Atheism (1976), A Rational Animal (1978), Darwinian Evolution (1984), Atheistic Humanism (1993) and Philosophical Essays of Antony Flew (1997).

Flew was the consummate atheist, in fact the most influential atheist of the twentieth century and was lauded by the atheist community.

His conversion to Deism (the belief of a supernatural being)

Debates were part of Flew’s armoury for getting his message across. One with philosopher and theologian Dr Gary Habermas stands out. This took place in 1985 in Dallas in front of a crowd of 3,000 people. A panel of ten judges gave the debate to Habermas seven to three. Habermas’ argument may have struck a chord with Flew as they became good friends and in 2004 he announced that he had become a deist, that is, he believed in a supernatural being, a god. A key principle in his philosophy was the Socratean concept of “follow the evidence where it leads. He stated:

Almost entirely because of the DNA investigations. What I think the DNA material has done is that it has shown, by the almost unbelievable complexity of the arrangements which are needed to produce (life), that intelligence must have been involved in getting these extraordinarily diverse elements to work together. It’s the enormous complexity of the number of elements and the enormous subtlety of the ways they work together. The meeting of these two parts at the right time by chance is simply minute. It is all a matter of the enormous complexity by which the results were achieved, which looked to me like the work of intelligence.[1] 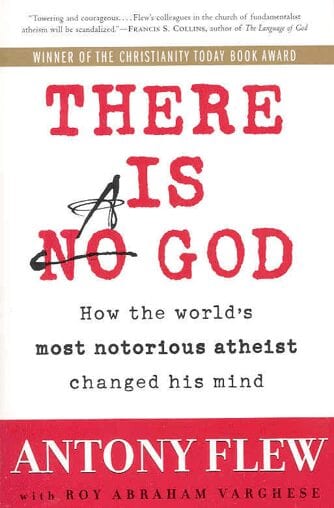 Flew published his new position in his last book: There is a God: How the World’s Most Notorious Atheist Changed His Mind. Of course, his rejection of atheism angered atheists, because the most influential atheist of the twentieth century is hard to dismiss, although some tried to argue that he had gone senile.

Interestingly, Sir Fredrick Hoyle (astronomer) and Dr Chandra Wickramasinghe (mathematician) calculated the chances of biologically active proteins forming purely by chance, from their constituent chemicals and concluded that the chances are impossibly high. And stated:

The notion that not only the biopolymer (protein) but the operating program of a living cell could be arrived at by chance in a primordial organic soup here on the Earth is evidently nonsense of a high order.[2]

He compared the random emergence of even the simplest cell to the likelihood that a tornado sweeping through a junkyard might assemble a Boeing 747 from the materials therein and towards the end of his life, he came to the conclusion:

If one proceeds directly and straightforwardly in this matter, without being deflected by a fear of incurring the wrath of scientific opinion, one arrives at the conclusion that biomaterials with their amazing measure or order must be the outcome of intelligent design. No other possibility I have been able to think of.[3]

Lee Strobel was a hard-line, arrogant and astute investigative journalist with a nose for a good story, as well as being an ardent atheist. His life changed totally when his wife told him that she had become a Christian. He decided to investigate the matter and show his wife that she was wrong and lead her out of Christianity. His investigations led him to become a believer and the writer of the Best Seller; The Case for Christ. To read my blog on Lee Strobel go to: https://www.adefenceofthebible.com/2017/07/14/lee-strobel.

Flew looked at the evidence as Hoyle and Strobel had done and rejected atheism and announced that he believed in a God as the only possible position he could hold. Unfortunately in Flew’s case, he did not look to the Bible in which the God who miraculously created everything revealed Himself, stating how He created; He simply spoke it into existence, in what order He created; read Genesis chapter one and why He created; it pleased him to do so.[4]

It is Christianity that makes sense, not atheism.

[1] Antony Flew with Roy Varghese, There is a God: How the World’s Most Notorious Atheist Changed His Mind. 2004, page 75.