Why Genetic Mutations Confirm the Bible and Oppose Evolution

errors in this copying which become permanently fixed in the cell.

An example of a mutation is sickle cell anaemia shown schematically. The disease is caused by a mutated version of the gene that helps make haemoglobin — a protein that carries oxygen in red blood cells. Sufferers have a shorter life expectancy.

There are now over 6,000 single gene disorders affecting humanity.[1] Almost all cancers are caused by genetic mutations.

God introduced mutations at the Fall recorded in Genesis chapter 3

God told Adam that he could eat the fruit of any tree in the Garden of Eden, except the fruit from the Tree of Knowledge of Good and Evil, if he did, he would surely die.[2] Presumably Adam passed this warning on to Eve. However, both of them defied God with the prompting of Satan and ate the forbidden fruit.[3] It is my contention that at this point God introduced mutations into both Adam and Eve. In doing this, He set in motion death that will eventually overtake them and all their offspring. Since Adam and Eve are the parents of all people, then all people are affected by God’s judgement. Note, Adam was created in the image and likeness of God.[4] However, his children were born in Adam’s likeness.[5]

It seems that Adam and Eve were designed to live forever.[6] However, once mutations commenced, death was inevitable, although Adam and his descendants up and until the Flood, lived for about 900 years. Mutations are accumulative as cellular repair mechanisms fail to keep up with the rate of mutations. Humans add 100 to 200 new mutations per generation.[7] So why was there not a decrease in life spans for Adam’s children? Adam and Eve would have had a lot of genetic diversity built into their genes. Think of the great range of dogs that exist today which originally came from a native wolf-like dog. And by the time the Flood came, at 2348 years after the creation of Adam, there would have been several hundred thousand people on earth, which would have provided a large gene pool. Mutations present mostly when there is a small gene pool through intra family marriage and this is why God prohibited the marriage between close family members. This was not a problem initially as mutations had not built to any significant level.[8]

Once the Flood came and the gene pool was reduced to just eight people (Noah, his wife, his three sons and three daughters-in-law) intra family breeding was inevitable. When the lifespan of Noah’s descendants is plotted against time a classic exponential biological decay is produced which is consistent with the decay of lifetimes produced by mutations. This is shown by the graph which is courtesy of Dr John Stanford from his book Genetic Entropy & the Mystery of the Genome, 2005. 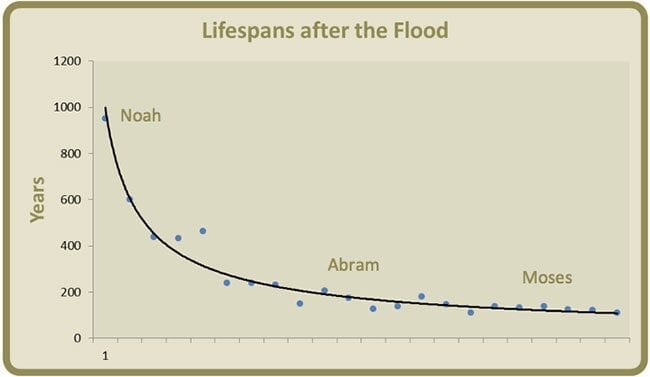 The revelation from modern DNA analysis

By looking at the mutations in the DNA in the mitochondria of cells of women of various ethnicities, researchers have been able to conclude that all women came from a single woman. They gave her the name Mitochondrial Eve. The DNA in the mitochondria is passed down exclusive from mothers. Also, they concluded that this original mother lived about 6,000 to 6,500 years ago.[9] This finding is in complete agreement with the biblical time frame. But what is even more fascinating, is the fact that there appears to be three basic mitochondrial DNA (mtDNA) lineages which in themselves trace back to one original mother as mentioned. Geneticists call them “M” “N” and “R.” This is consistent with Noah’s three daughters-in-law, who would have had a different variety of DNA mutations because they came from a much wider pre-flood gene pool.[10]

On the other hand, all men inherit the DNA in their Y chromosome, exclusively from their father. As with women, genetic studies have revealed that all men had one original father who was given the name, “Y Chromosome Adam.” However, there has been no other lineages in this line, which is consistent with the Flood event where all of the men saved were Noah and his sons. Since the DNA in the Y chromosome is passed down exactly from father to son, there would be only one type of Y chromosome, which is what geneticists have found.[11]

There are many evidences for the reality of Noah’s Flood[12] and here is an additional one, this time from genetics.

Entropy is the amount of disorder or randomness in a system. It can also be described as the amount of unavailable heat energy in a system. The second Law of Thermodynamics, states that for a closed system, entropy will increase. That is, the system will go from order to disorder which is what is happening to the universe. So, for genetic entropy, genes go from order to disorder by way of mutations.

Dr John C Stanford holds the position of associate professor at Cornel University. He has published many papers. In his book; Genetic Entropy & the Mystery of the Genome,[13] Stanford looks at the way DNA mutations are rapidly degrading the human genome. He makes the following points:

The following is an eight-minute YouTube video of Dr Stanford explaining that mutations will bring an end to mankind: youtube.com/watch?v=K8KbM-xkfVk

There is no way humans have existed for hundreds of thousands of years; we would have all been dead many times over. As Stanford has shown, which all geneticists know, we are not evolving to become stronger, more resilient people with greater intellect, we are running down and mutations will eventually be our demise if no great calamity gets us first. Evolution could not have happened.

Science is confirming the Bible not showing it to be false.

[3] All of this and God’s reaction to their defiance is recorded in Genesis chapter 3.

[8] For more information about this, go to: adefenceofthebible.com/2016/04/02/science-4-gods-prohibition-of-marriage-within-the-family.

[12] Go to: adefenceofthebible.com/blog and scroll down to the seven articles on Noah’s Flood.