Previous Post
Why did God make creatures that bite and kill?
Next Post
Why Genetic Mutations Confirm the Bible and Oppose Evolution

Hezekiah was the son of Ahaz and the 13th successor of David as king of Judah, who ruled from Jerusalem. The dates of his reign are often given as 715 to about 686 BC, a period of 29 years on the throne. The Bible describes Hezekiah so: There was no one like him among all the kings of Judah, either before him or after him.[1] He was dedicated to eliminating idolatry in his kingdom that his evil father had pursued.

The evidence that exists of his reign, associates, projects and the events that occurred during his time, is very strong.

Confirmation of what the Bible says about Hezekiah 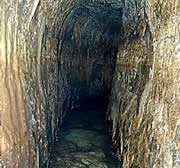 Hezekiah’s Tunnel was constructed to bring water into Jerusalem from the Gihon Spring, which was outside its wall and accessible to the rampaging Assyrian army. As well, he had its source blocked. Today, people can view the tunnel and if they have the desire, walk through its 533 metres. It is mentioned in 2 Kings 20:20; 2 Chronicles 32:2-4. To see my blog on Hezekiah’s tunnel, go to: https://www.adefenceofthebible.com/2015/11/16/archaeology-3-hezekiahs-tunnel. 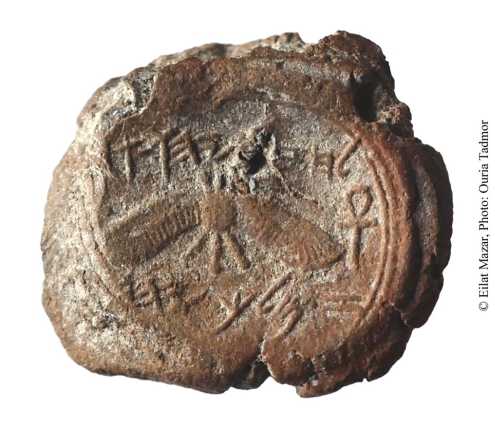 Hezekiah’s Seal (Bulla), bearing his winged scarab (dung beetle) has been unearthed in an official archaeological dig in 2015. My blog on this can be viewed at: https://www.adefenceofthebible.com/2016/01/02/archaeology-5-king-hezekiahs-seal-found.

Hezekiah’s Wall, mentioned in 2 Chronicles 32:5, parts of which, are present today for all to view.

Judea’s godly king took steps to prepare Jerusalem for an Assyrian invasion. Not only did he have the tunnel constructed, he also had a large wall built to protect the City from the Assyrian battering rams.

The wall was unearthed in the 1970s by Israeli archaeologist Nahman Avigad and dated to the reign of King Hezekiah.  The Broad Wall as it became known as well, is a massive defensive structure, seven meters thick. The unbroken length of wall uncovered by Avigad’s dig, runs 65 metres long and is preserved in places to a height of 3.3 metres. See photograph. 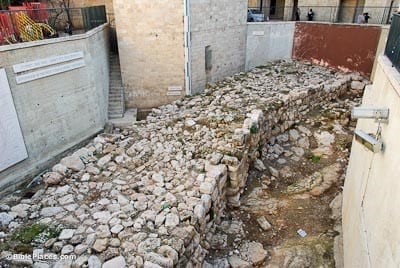 Scripture implies that the wall and water tunnel project were hastily completed due to the imminent threat of Sennacherib’s army. This haste is evident by an analysis of the wall. Avigad noticed that the stones used to build the wall were smaller than the stones normally used for such protective structures. It now appears that in his haste, Hezekiah used stones from nearby homes. This is confirmed by Isaiah[2] who was the Lord’s prophet advising Hezekiah and who wrote; ..you saw that the City of David had many breaches in its defences; you stored up water in the lower pool. You counted the buildings in Jerusalem and tore down houses to strengthen the wall. This statement is also a confirmation of the historicity of Isaiah’s writings as well as the Bible’s mentioning of Hezekiah’s construction.

Hezekiah’s name is on an Assyrian stele. King Hezekiah had his tunnel and wall constructed in order to have protection and a plentiful supply of water during a siege from the all-conquering Assyrian army. But Hezekiah had no need for any defensive measures because the Lord was on his side. He prayed in the temple and in the morning, 185,000 men of the Assyrian army were dead.[3] This event is confirmed by the Greek historian Herodotus who refers to it in his manuscript; Histories which he wrote in 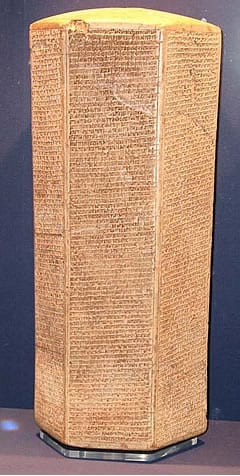 approximately 450 BC.[4] Sennacherib consequently retreated to Nineveh. However, he did record his victories on stele.

This stele has been named after Colonel Taylor of the British army, who discovered it in 1830, in the ruins of Sennacherib’s palace in Nineveh. It resides in the British Museum. The stele confirms the following points made in the Bible—Sennacherib did invade Judah; he conquered many cities and trapped Hezekiah in Jerusalem. In addition, the stele reveals that Hezekiah paid him tribute, but this happened before Sennacherib came to Jerusalem.[5] It seems likely that Sennacherib added this statement as a way of explaining why he did not lay waste to Jerusalem as he had done to 46 other cities. No mention is made of the capture of Jerusalem.

Again, archaeology has confirmed the people, places and events mentioned in the Bible to an amazing degree. Also, apart from all else that constitutes the Bible, it is a record of actual history.