Crucifixion was performed to dissuade those who witness it from perpetrating similar crimes. Victims were sometimes left on display after death as a warning to any other potential criminals. Crucifixion was usually intended to provide a death that was particularly slow, painful (hence the term excruciating, literally “out of crucifying”), gruesome, humiliating, and public, using whatever means were most expedient for that goal. Crucifixion methods varied considerably with location and time period.

The Greek and Latin words corresponding to “crucifixion” applied to many different forms of painful execution. These may be being impaled on a stake, upright pole (a crux simplex), or to a combination of an upright (stipes) and a crossbeam (patibulum) to give the traditional Latin cross (crux immissa). Other forms are; the St Andrews cross which is shaped like an “X” (crux decussata) and one shaped like the Greek letter tau or “T” (crux humilus) 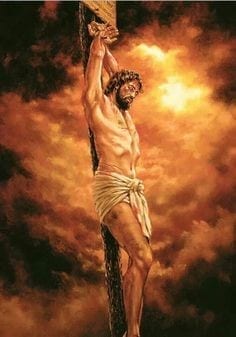 So, what was the actual form of crucifixion that our Lord suffered. The Jehovah Witnesses say it was a simple pole which they call the Torture Stake as shown. To support their argument, they say that the Greek word stauros only means a stake. But Kittel’s Theological Dictionary states that it can mean any of three types; a pointed stake, an upright with a cross beam and a cross consisting of two intersecting beams of equal length.

Since the Jehovah witnesses are wrong in denying Christ’s Lordship are they wrong in this as well?

Evidence for the traditional cross

Evidence from the Bible

If Jesus was crucified on a pole as shown, only one nail would be required to affix His hands, but Thomas states nails:

Unless I see the nail marks in his hands and put my figure where the nails were, and put my hand into his side, I will not believe it.[1]

Also, Matthew[2] states: ..above his head they put the charge against him, which read, THIS IS JESUS KING OF THE JEWS. But if Jesus was crucified on a stake as shown, then the sign would have been placed directly above His hands and not above His head.

Roman playwright Plautus (254-184 BC) and Greek philosopher Plutarch (AD 46-120) refer in their writings to convicted criminals carrying their own patibulum (cross bar) to their places of crucifixion.[3] Lucius Annaeus Seneca (4 BC-AD 65) also known simply as Seneca, was a Roman Stoic philosopher and statesman. In his writings he refers to condemned men being forced to carry their own patibulum to the place of crucifixion.[4] The carrying of the patibulum seems to have been common practise in biblical times and is consistent with Jesus being made to carry his patibulum as stated in John’s gospel.[5] Again confirming that Jesus was crucified on what has become known as the traditional cross.

Evidence from outside the Bible

The Epistle of Barnabas is a Greek epistle written between 70–132 AD. It is preserved complete in the 4th century Codex Sinaiticus where it appears at the end of the New Testament. The epistle described how Jesus’ outstretched arms on the cross were similar to Moses’ outstretched arms in a battle with the Amalekites.[6]

Apologist Justin Martyr (110-165) described Christ’s crucifixion as being similar to the roasting of a sacrificial lamb which is held by two sticks in the form of a cross; one lengthwise and one horizontal to which its legs are attached.[7]

Irenaeus (140-202) who heard the preaching of Polycarp who in turn, heard from the apostle John, wrote concerning Christ’s cross; The very form of the cross, too, has five extremities, two in length, two in breadth, and one in the middle, on which [last] the person rests who is fixed by the nails.[8] This describes a Latin cross. 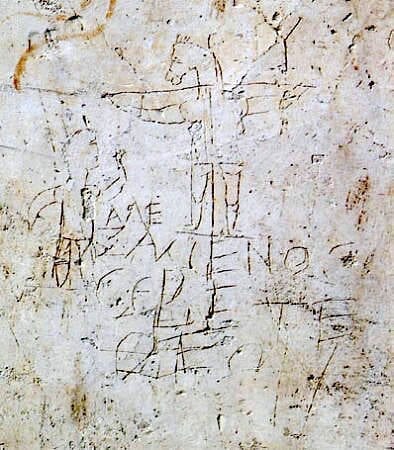 The Alexamenos graffito (also known as the graffito blasfemo, or blasphemous graffito) is a piece of Roman graffiti scratched in plaster on the wall of a room near the Palatine Hill in Rome, which has now been removed and is in the Palatine Hill Museum. It may be the earliest surviving depiction of Jesus’ crucifixion, albeit a derogatory one. The image seems to show a young man worshipping a crucified, donkey-headed figure. The Greek inscription approximately translates to “Alexamenos worships [his] god,” indicating that the graffito was apparently meant to mock a Christian named Alexamenos.[9] It clearly shows a cross with the victim’s arms outstretched.

It is hard to date, but has been estimated to have been made about AD 200.

Christians can be assured that the cross used for almost 2,000 years and which is so important to us, is the same type that our Lord was crucified on. It is the Jehovah’s Witnesses who are wrong as they are with the very nature and essence of our Lord and Saviour Jesus Christ.

[4] John Dickson, The Christ Files: How Historians Know What They Know about Jesus, 2010.