Alexander the Great conquered the known world, but he spared Jerusalem, why?

There are four main players in this true story which took place between the Old and New Testaments:

Alexander the Great. Immediately after inheriting his father Philip’s throne at the age of 20, in 336 BC. Alexander consolidated his power by murdering a number of rivals and putting down military insurrections from Greek city-states. With his home front secured, Alexander began a campaign of conquest of the Persian Empire in 334 BC.

Daniel. Daniel was one of the Bible’s major prophets who prophesied future world events.

Jaddus. Jaddus was the High Priest in Jerusalem at the time of Alexander’s military successes.

Flavius Josephus. Josephus (37- 100 AD) was by far the most important writer illuminating the whole biblical era. Although a Jew, he was employed by the Romans to write Jewish history, which he did with two important volumes; The Jewish War and Antiquities of the Jews.

The prophet Daniel had predicted in the third year of King Belshazzar’s reign (about 551 BC), the rise of  Greece and its conquest of the Medo-Persian Empire: 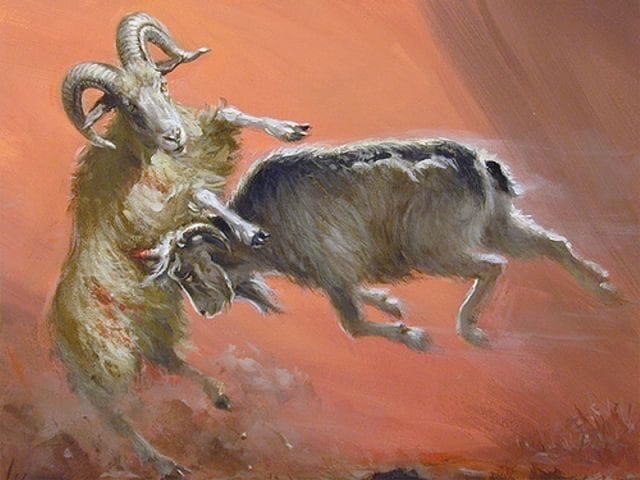 As I raised my eyes, look! there was a ram standing before the watercourse, and it had two horns. The two horns were tall, but one was higher than the other, and the higher one came up later. (Daniel 8:3)

Immediately after seeing the ram, the prophet sees another fearsome beast, a hairy he-goat closing in on the ram with two horns:

As I kept watching, look! there was a male goat coming from the west crossing the surface of the whole earth without touching the ground. And the goat had a conspicuous horn between its eyes. It was coming toward the ram with the two horns, which I had seen standing before the watercourse; it was running toward it in a powerful rage. I saw it closing in on the ram, and it was filled with bitterness toward it. It struck down the ram and broke its two horns, and the ram was powerless to stand up to it. It threw the ram to the ground and trampled it down, and there was no one to rescue it from its power. (Daniel 8: 5-7)

The prophet was told  the identities of the beasts:

The following account is taken from the Josephus.[1] After conquering Persia, Alexander marched into Syria, taking Damascus and Sidon and then besieged Tyre. From here he sent a letter to the high priest of the Jews, asking him for supplies, and requesting that he transfer his allegiance and tribute from Darius to Alexander. The high priest answered that he had promised Darius not to bear arms against him, and he would keep his oath as long as Darius lived. Alexander was very angry, and threatened that as soon as he had taken Tyre he would march against the Jewish high priest.

After a difficult siege of Tyre lasting almost a year, Alexander turned his attention to the strategically significant coastal city of Gaza, which he defeated after a relatively short siege. Now he was free to deal with intransigent Jerusalem. Josephus takes up the story:

When Jaddua, the High Priest heard that alexander was coming, he was terrified, and ordered his people to join him in sacrifice and prayer to God. Appearing to him in a dream, God told him to take courage and decorate the city with wreaths. The people were to clothe themselves in white and the priests with the robes of their order. Then they were to march out of the gates to meet the Macedonians, for they would not be harmed.

Jaddua awoke rejoicing, and announced the revelation to all. When he learned that Alexander was not 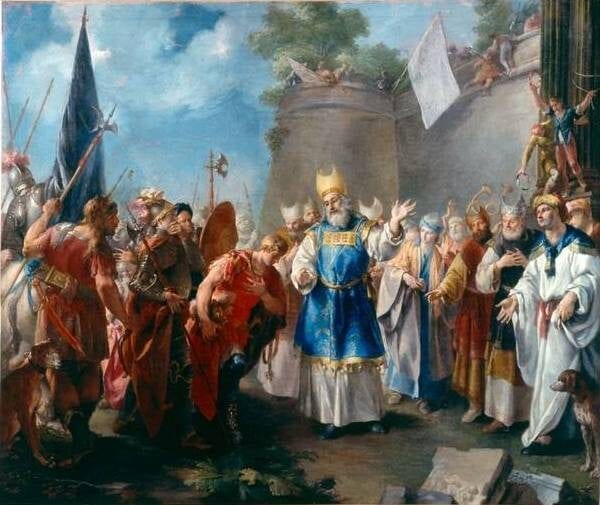 far from the city, he went out in procession with the priests and the people. Alexander saw the procession coming toward him, the priests clothed in linen and the high priest in a robe of blue and gold. On his head was a mitre with a golden plate on which God’s name was inscribed. Approaching alone, Alexander prostrated himself before the Name and greeted the high priest. As the Jews welcomed Alexander with one voice and encircled him, his officers wondered if he had suddenly become insane. One of them, Permentio, went up to Alexander and asked him to explain. He replied, “When I was at Dium in Macedonia, considering how I could become master of Asia, I saw this very person in my sleep, dressed as he is now. He urged me not to delay, but to cross over confidently and take dominion over the Persians.”

Josephus goes on to say that Alexander goes into the temple and made sacrifices to God under the direction of the High Priest. The book of Daniel was shown to him which predicted one of the Greeks would destroy the Persian empire and he thought to himself to be the one so designated.

Liberal scholars claim that the book of Daniel was written much later, but the dates of Alexander’s conquests are well known and confirm Daniel wrote previous to these events. The Bible states that he wrote during the exile and his writings were completed by 530 BC.[2] As well, these events show the accuracy of Daniel’s prophecy as he wrote it some 200 years prior.

Two of the most ancient accounts of Alexander’s military campaign, the Anabasis of Alexander by Arrian and the Histories of Alexander the Great by Quintus Curtius Rufus are silent on this question. Both accounts concentrate only on the major engagements in Alexander’s campaign and they may have thought the brief, peaceful encounter at Jerusalem to have been relatively unimportant.[3] Maybe Josephus, who is a well-respected historian, filled in the gap left by the two other historians.