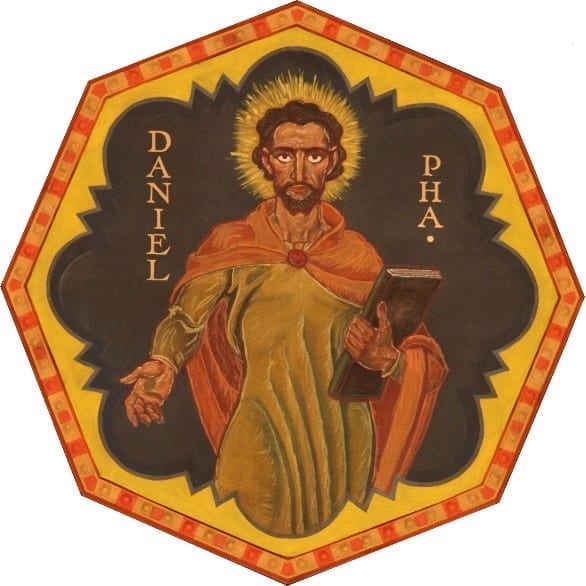 Because Daniel’s prophecies were so detailed and accurate, liberal scholars say the book of Daniel must have been written no earlier than the second century BC. In other words, after all that he had prophesied had taken place. However, the weight of evidence is against such a proposal.

In chapter 1, Daniel states that he was among the people deported to Babylon during Nebuchadnezzar’s first attack on Jerusalem in 605 BC. He was still in Babylon when Darius the Mede (This may have been Cyrus’s throne name or, he may have been a governor under Cyrus) took over the kingdom in 539 BC, because it was Daniel who read the “writing on the wall.” Scholars believe that Daniel completed his book by 530 BC.[1]

Daniel tells of future events in chapters 7-12 commencing with the identification of four future kingdoms (chapter 7), the destruction of the Medo-Persian empire by Alexander the Great (chapter 8), the coming of the Messiah (chapter 9) and in chapter 11 Daniel describes the major events that will take place up to the time of the Messiah’s appearance. It is from verses 2 to 34 that we will examine here.[2]

Daniel’s prophecies are in black and the events that took place are in blue.

Verse 2 Now then, I tell you the truth: Three more kings will appear in Persia,

and then a fourth who will be far richer than all the others. When he has gained power by his wealth, he will stir up everyone against the kingdom of Greece.

Verse 3. Then a mighty king will appear, who will rule with great power and do as he pleases.

Verse 4. After he has appeared, his empire will be broken up and parcelled out to the four winds of heaven. It will not go to his descendants, nor will it have the power he exercised, because his empire will be uprooted and given to others.

When Alexander died in 323 BC, his empire was dived into four; Macedon and Greece, under Antipater and Cassander, Thrace and Asia Minor under Lysimachus, Syria under Seleucus 1 and Palestine and Egypt under Ptolemy 1. None were descendants of Alexander.

Verse 5. The king of the South will become strong, but one of his commanders will become even stronger and he will rule his own kingdom with great power.

The king of the South was Ptolemy I Soter (323- 285 BC) of Egypt. One of his commanders was Seleucus 1 Nicator (311-280). His own kingdom was Babylon, to which he added extensive territories both east and west.

Verse 6. After some years, they will become allies. The daughter of the king of the South will go to the king of the North to make an alliance, but she will not retain her power and he and his power will not last

The daughter of the king of the South was Berenice, daughter of Ptolemy II Philadelphus (285-246 BC) of Egypt. The king of the North was Antiochus II Theos (261-246 BC) of Syria. The alliance was a treaty cemented by the marriage of Berenice to Antiochus. But she will not retain her power and he his power will not last. Antiochus’ former wife, Laodice, conspired to have Berenice and Antiochus put to death.

Verse 7. One of her family line will arise to take her place. He will attack the forces of the king of the North and enter his fortress; he will fight against them and be victorious.

One of her family line was Berenice’s brother, Ptolemy III Euergetes (246-221 BC) of Egypt who did away with Laodice. The king of the North was Seleucus II Callinicus (246-226 BC) of Syria. His fortress was either Seleucus which was the port of Antioch or Antioch itself.

Verse 8. He will also seize their gods, their metal images and their valuable articles of silver and gold and carry them off to Egypt.

Their gods were images of Syrian deities and also of Egyptian gods that the Persian Cambyses had carried off after conquering Egypt in 525 BC.

Verse 10. His sons will prepare for war and assemble a great army, which will sweep on like an irresistible flood and carry the battle as far as his fortress.

His sons were Seleucus III Ceraunus (226-223 BC) and Antiochus III (223-187 BC), were sons of Seleucus II. His fortress was Ptolemy’s in southern Palestine.

The king of the South was Ptolemy IV Philopator (221-203 BC) of Egypt. The king of the North was Antiochus III and the defeat was at Raphia in 217 BC.

Verse 12. When the army was carried off, the king of the South will be filled with pride and will slaughter many thousands, yet he will not remain triumphant, Verse 13. For the king of the North will muster another army, larger than the first; and after several years, he will advance with a huge army fully equipped.

Verse 14. In those times many will rise against the king of the South. The violent men among your own people will rebel in fulfillment of the vision, but without success.

The king of the South was Ptolemy V Epiphanes (203-181 BC) of Egypt. Violent men among your own people were Jews who joined forces with Antiochus. Without success. The Ptolemaic general Scopas crushed the rebellion in 200 BC.

The fortified city was the Mediterranean port of Sidon.

Verse 16. The invader will do as he pleases; no one will be able to stand against him. He will establish himself in the Beautiful Land and will have the power to destroy it.

The invader was Antiochus, who was in control of Palestine by 197 BC. The Beautiful Land was of course Judah and Samaria.

Verse 17. He will determine to come with the might of his entire kingdom and will make an alliance with the king of the South. And will give him a daughter in marriage in order to overthrow the kingdom, but his plans will not succeed or help him.

Antiochus gave his daughter Cleopatra I in marriage to Ptolemy Vin 194 BC.

He, being Antiochus. Coastlands would be Asia Minor and possibly mainland Greece. The commander was the Roman consul Lucius Cornelius Asiaticus who defeated Antiochus at Magnesia in Asia Minor in 190 BC.

Verse 19. After this, he will turn back toward the fortresses of his own country but will stumble and fall to be seen no more.

Antiochus died in 187 BC while attempting to plunder a temple in the province of Elymais.

Verse 20. His successor will send pout a tax collector to maintain the royal splendour. In a few years he will be destroyed, yet not in anger or in battle.

His successor was Seleucus IV Philopator (187-175 BC). He was the son and successor of Antiochus the Great. The tax collector was Seleucus’s finance minister, Heliodorus who engineered a conspiracy against Seleucus.

Verse 21. He will be succeeded by a contemptible person who has not been given the honor of royalty. He will invade the kingdom when its people feel secure, and he will seize it through intrigue.

The contemptible person was Seleucus’ younger brother Antiochus IV Epiphanes (175-164 BC). Antiochus seized power while the rightful heir to the throne, the son of Seleucus was still very young.

Verse 22. Then an overwhelming army will be swept away before him; both it and the prince of the covenant will be destroyed.

The prince of the covenant could be either the high priest, Onias III who was murdered in 170 BC. Or, if the Hebrew of this phrase is translated “confederate prince” Ptolemy VI Philometor (181-146 BC).

Verse 23. After completing an agreement with him, he will act deceitfully, and with only a few people will rise to power.

The “he” being Antiochus.

Verse 24. When the riches provinces feel secure, he will invade them and achieve what neither his fathers nor forefathers did. He will distribute plunder loot and wealth among his followers. He will plot the overflow of fortresses—but only for a time.

The richest provinces were either Palestine or Egypt. The fortresses were in Egypt.

For verses 26 and 26, the king of the South was Ptolemy VI and the army mentioned in verse 26 was Ptolemy’s.

Verse 27. The two kings with their hearts bent on evil, will sit at the same table and lie to each other, but to no avail, because the end will come at the appointed time.

In 169 BC Antiochus plundered the temple, the holy covenant, set up a garrison there and murdered many Jews in the city.

Verse 31. His armed forces will rise up to desecrate the temple fortress and will abolish the daily sacrifice. Then they will set up an abomination that causes desecration.

In 168 BC, Antiochus Epiphanies set up an alter to the pagan god Zeus Olympius in the Jerusalem temple. This was the abomination that causes desecration which Jesus referred (Matthew 24:15 and Luke 21:20) to as prefiguring a future one.

Verse 33. Those who are wise will instruct many, though for a time will fall by the sword or be burnt or captured or plundered.

Those who are wise would be referring to the godly leaders of the Jewish resistance movement. They were called also, the Hasidim.

Such a detailed, accurate and precise prophesy covering the period from about 530 to 168 BC, has caused many people who doubt the validity of the scriptures and to say that Daniel could not have written this, it could have only been recorded after the events it describes which would have been early second century BC. However, there is overwhelming evidence to the validity of Daniel as presented in the Bible.

It is clear from the above, that Daniel wrote these prophecies before the events took place. The detail that they contain with people, relationships and events can only be through Divine inspiration which is more powerful evidence for the infallibility of the Bible and that it is God’s word to us.