Nineveh was originally established by Nimrod in about 2,300 BC as mentioned in Genesis chapter 10. Nimrod was a descendent of Noah’s son Ham. Its status as the capital of the great Assyrian empire was given to it by one of its most successful kings, Sennacherib (705-681 BC) who enlarged and beautified it greatly. 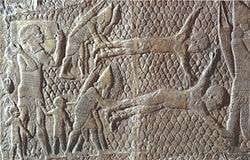 The cruelty of the Assyrians

Assyria was at the height of its power during the eighth century to the seventh century BC. The Assyrians were noted for their ruthless brutality and terrible atrocities they committed on their captives. Many of their victims were beheaded, and the Assyrian king Shalmaneser III boasted of erecting a pyramid of chopped-off heads in front of an enemy’s city. Other Assyrian kings stacked corpse like cord wood by the gates of defeated cities.[1] 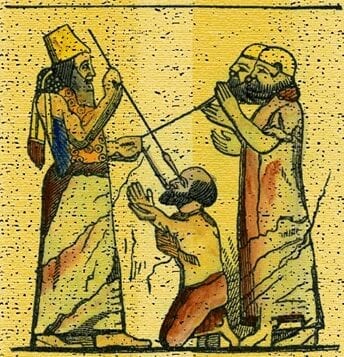 Their conquered subjects were subjected to being impaled on sharp wooden poles while still alive, burnt, disembowelled and flayed (skinned) alive as shown in the top image. The middle image shows an Assyrian king blinding a captive king while holding his head still with a hook in his lips. The other kings are waiting for the same fate with bridles in their noses.

Another act of gross cruelty was the physical tearing out of the tongue of their hapless captives as depicted in the bottom relief. These reliefs have come to light through archaeological discoveries.

Assyria stands alone among all the nations of the ancient world in its extreme cruelty of the treatment of those who it captured. 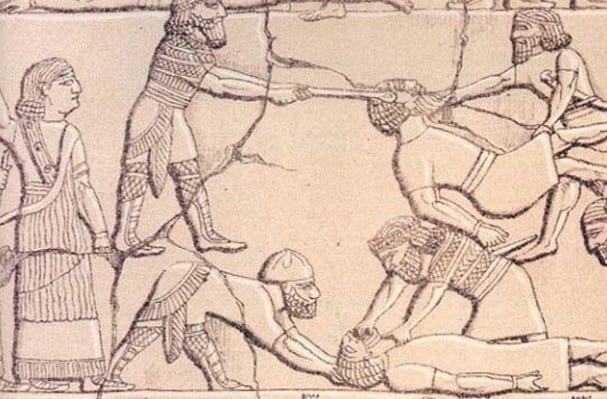 From the foregoing, it is easy to understand Jonah’s reaction to God’s directive to go to Nineveh and call the people to repentance knowing full well if they did, God would withhold His hand of judgement. A modern-day illustration would be telling a Jew to go into Nazi Germany and call on the people to repent and God would save them.

After being the world power from the start of its expansion in 911 BC, Shalmaneser IV (783–773 BC) lost most of Syria after a campaign against Damascus in 773. During the reign of Ashur-dan III (772–755 BC), the Assyrians suffered an overwhelming defeat at the hands of the people of Urartu (from the region of Ararat) and the rest of his reign was shadowed by rebellions and by epidemics of plague. The situation deteriorated further under the reign of Ashur-nirari V (754–746 BC) which saw the bloodiest civil wars in the empire’s history and Ashur-nirari V was slain by his own countrymen in 746 BC.[2]

It was at this point in time, around 745 BC, that it is suggested,[3] that Jonah came on the scene. 2 Kings 14:25, tells us that Jonah was prophesying when Jeroboam II was king of Israel and this was from 782-753 BC. The people of Assyria were at their lowest and may even have contemplated that their destruction was imminent. So, when Jonah walked into Nineveh and told them: Forty more days and Nineveh will be overturned,[4] the people believed him and this is what the verse proceeds to say that, The Ninevites believed God.

This low ebb in Assyrian history coupled with Jonah’s dramatic entry; being regurgitated by a large fish, which God had created for the purpose,[5] onto the beach. Jonah quite possibly had his hair and skin bleached as a result of the fish’s digestive juices. If this was observed, as is likely, Jonah could have had quite a following when he reached Nineveh and the people could have been expecting him to make an announcement. The Ninevites could have easily thought that he had a message from one of their gods.

The new king Tiglath-pileser III took the throne in 745 BC. So, it is quite feasible for Jonah to go to Nineveh in or slightly after, 745 BC, [8] preach to the people and they repent along with their new king. Under a new and now repentant monarchy, Assyria’s fortunes were reversed and the people enjoyed a sustained period of prosperity. He secured boundaries to the north, east and south, then moved to claim for Assyria a port on the Mediterranean. He gained control of the caravan routes that plied the coastal regions and thus the wealth of the world poured into the coffers of Assyria.[6]

But, as with Israel and Judah[7] after them, the repentant king died and other monarchs took his place, the people descended into their old ways and rejected the one true God and God removed His hand of blessing. But before He allowed the Assyrians to be conquered and Nineveh destroyed, He used Sargon II to subjugate Israel and take most of them into captivity which happened in 722 BC. This subjugation was prophesied by Micah, one of the Minor Prophets.

At first glance, the account of Jonah being swallowed by a large fish, and the readiness with which the people of Nineveh and their king repented, all seemed to be not quite right. But once we look at the events at the time and examine the account a little more closely, with the Ninevite expecting calamity and Jonah arriving as he did, followed by a resurgence of Assyrian power, it all fits into place nicely.

[5] Jonah 1:17. The Bible states that the large fish was created by God for the purpose of swallowing Jonah and keeping him alive in the fish’s abdomen for a period of time, therefore Christians do not need to explain how it all happened; it was a miracle of God just as was the creation of the heavens and earth and the boarding of the Ark by selected animals.

[7] After the reign of Solomon, Israel split into two kingdoms with most people from ten tribes forming a kingdom in the north and the tribes of Judah and Benjamin becoming the southern kingdom. The books of Kings and Chronicles refer to the northern tribe as Israel or Samaria and the southern tribe as Judah.