Each of the four gospel writers give differing accounts of the events of the first Easter Sunday; some minor and some major. Biblical critics have used these differences to claim the Bible to be nothing more than a collection of stories.

Time of visit: After the Sabbath, at dawn on the first day of the week.

Women who visited: Mary Magdalene and the other Mary.

Additional information: An angel of the Lord came down from heaven, rolled back the stone and sat on it. The guards were so afraid of him they shook and became like dead men.

Guards went into the city and reported everything to the chief priests. They gave them large sums of money and told them to say, “His disciples came during the night and stole him away while were asleep,”

Time of visit: When the Sabbath was over. Very early on the first day of the week, just after sunrise.

Women who visited: Mary Magdalene, Mary the mother of James and Salome.

Angels: A young man dressed in a white robe sitting.

Angel’s statement: Jesus has risen, go and tell his disciples and Peter.

Woman’s action: They fled the tomb and said nothing to anyone because they were afraid.

Time of visit: On the first day of the week, very early in the morning.

Women who visited: Mary Magdalene, Joana, Mary the mother of James and the others.

Angels: Two men in clothes that gleamed like lightning.

Angels’ statement: He has risen, remember how he told you.

Women’s actions: they told all these things to the eleven and to all others.

Additional information: The encounter Jesus had with the two on the road to Emmaus.

Time of visit: Early on the first day of the week while it was still dark.

Angels’ statement: Woman why are you crying?

Women’s action: She ran to Simon Peter and the other disciple, the one Jesus loved.

Additional information: Peter and John ran to the tomb. Jesus appeared to Mary Magdalene and spoke to her.

It is possible to combine these accounts into one coherent form

The very first thing that took place was that an angel rolled away the stone covering the entrance to the tomb; not for our Lord to come out, but for people to be able to see in. Matthew tells us this and it is confirmed in each gospel account, because when the women arrived, the stone was rolled away. 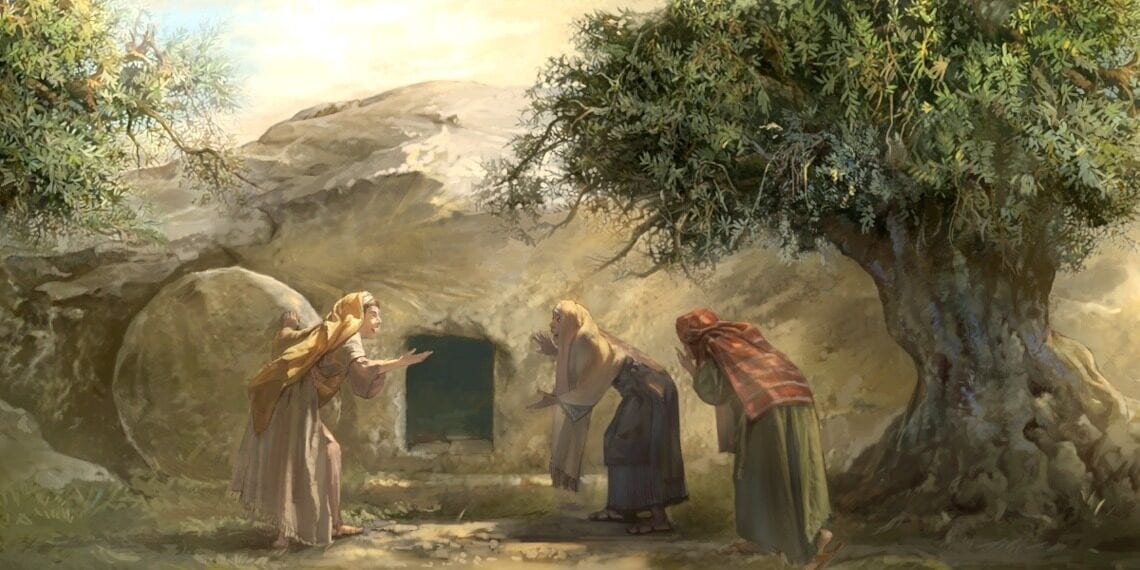 When it comes to the number of women going to the tomb, all the writers mention Mary Magdalene. Matthew has two women, Mark three, Luke has three plus others and John has just Mary Magdalene. Matthew, Mark and Luke record that an angel told the women that Jesus had risen, when they arrived at the tomb and John is silent on this.

If I went to buy a car and I told other people that a salesman named Bob showed me one that I liked, I am not saying that he was the only person present, but he was the one who was significant to my story, similarly, with the gospel accounts, Mary Magdalene was named because she was pertinent to the account. As well, it is significant that when John relates Mary’s story, he records her as saying; They have taken the Lord out of the tomb and we don’t know where they have put him. So, Mary Magdalene confirms that there were other women with her.

The same reasoning can be applied to the number of angels; only the one who spoke is mentioned by Matthew and Mark. Luke states that there were two angels. Incidentally, he provides more information about the number of women as well.[1] John does not mention angels when the women went to the tomb initially, but he mentioned two were present when Mary returned.

So, what is clear, is that early Sunday morning, Mary Magdalene and other women went to the tomb where Jesus was laid, with spices in order to anoint His body which was left incomplete by Joseph of 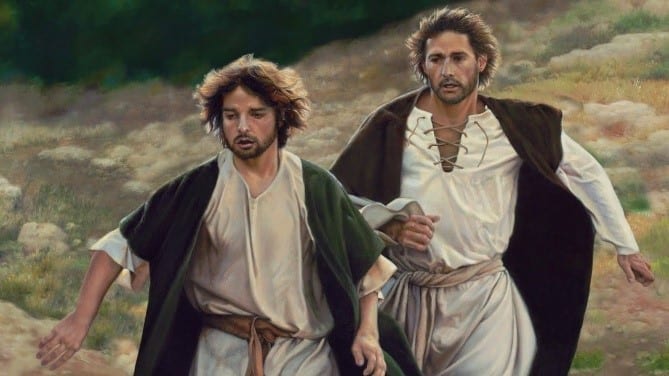 Arimathea and Nicodemus because of the approaching Sabbath. When they got there, the stone had been rolled away, the guards had dispersed in fright and there were two angels present. One spoke to them. The women then went and told the disciples as they were instructed, but they did not believe them. Peter however, got up and ran to the tomb (Luke 24:12). It appears that John decided to make a race of it. He records in his gospel three times that he beat Peter to the tomb. On arrival, they saw that it was empty and the grave clothes were lying where Jesus had laid.

With so much excitement, suspense, mystery and wonderment in the air, the women simply did not disperse and go home, they went back to the empty tomb, which might have taken a while as it must have been outside the city wall.[2] By the time they got there, Peter and John had realised the significance of what they saw and had gone back to tell the other disciples. It is at the tomb that the risen Saviour appears to the women as Matthew states, but He speaks only to Mary Magdalene as John records. It is possible that the other women may have been a little way from the tomb entrance, possibly looking for something that could help them understand what had happened. John tells us that Mary and possibly the other women with her, returned to the disciples and she told them that she had seen the Lord.

No gospel provides the complete account, but there are sufficient differences between them to rule out any collusion, and as has been shown, the differences do not contradict each other. The writers got their information from different sources. Matthew and John were present, Mark, who would have been young at the time, is believed to have got his information from Peter who was present also, and Luke may have spoken to many people to put his account together.

What initially looked like a mixture of disconnected stories is really one coherent account of the most amazing event in human history.

For a comprehensive review of this topic, go to: http://www.tektonics.org/qt/rezrvw.php

[1] Luke was a physician and wrote in excellent Greek. The purpose of his writing was to tell his friend Theophilus about the events concerning Jesus, so it is understandable that he would give a report as complete as he could.