Animals and plants that lived with the dinosaurs

Carl Werner was raised in a Roman Catholic home. He went to church and believed the Bible stories he heard, that is, until he arrived at University and studied medicine. There, he was told evolution was a scientific fact and he believed it. Why wouldn’t he? While having a pizza, a classmate asked him three probing questions: What did he think about the problems with the fossil record which casts doubts on the theory of evolution? What did he think about the problems with the laws of physics in the big bang model? How could life begin if proteins did not form naturally? And finally, he said, “Carl, I challenge you to prove evolution.” Carl accepted the challenge and thought that after he graduated, he would study evolution in his spare time and have it wrapped up in a few years. It took him 30 years. He and his wife Debbie travelled 108,561 miles and visited 60 museums throughout the world investigating the evidence of the fossil record and published his results in a book.

Many perceive that the fossil record is the greatest evidence for the theory of evolution. The theory claims that life in the far distant past was comprised of strange and unusual animals and plants that 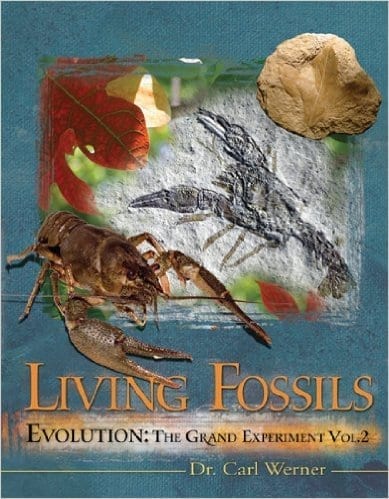 evolved over time into the familiar life-forms that surround us today. But has evolution taken place? Have plants and animals changed over time from one species into another, for example, did some dinosaurs change into birds as the evolution story posits?

In his thorough and well-presented book; Living Fossils, Evolution: The Grand Experiment Vol. 2, New leaf Press, 2009 (pictured),[1] Dr Werner provides irrefutable evidence that many of the common everyday animals, birds and plants that we see today actually lived with the dinosaurs because their fossils were found in the same geological layers as the dinosaurs. Of the museums, he visited, none showed displays of dinosaurs which included modern animals and plants, only on rigorous questioning did palaeontologists admit that this was the case. Dr Werner concluded that museums are complicit in perpetuating the evolution myth.

I have had a mosaic made (below) of just a small number of the life forms Carl mentions in his book, in order to give the reader an indication of what lived with dinosaurs which is the same as we see today. 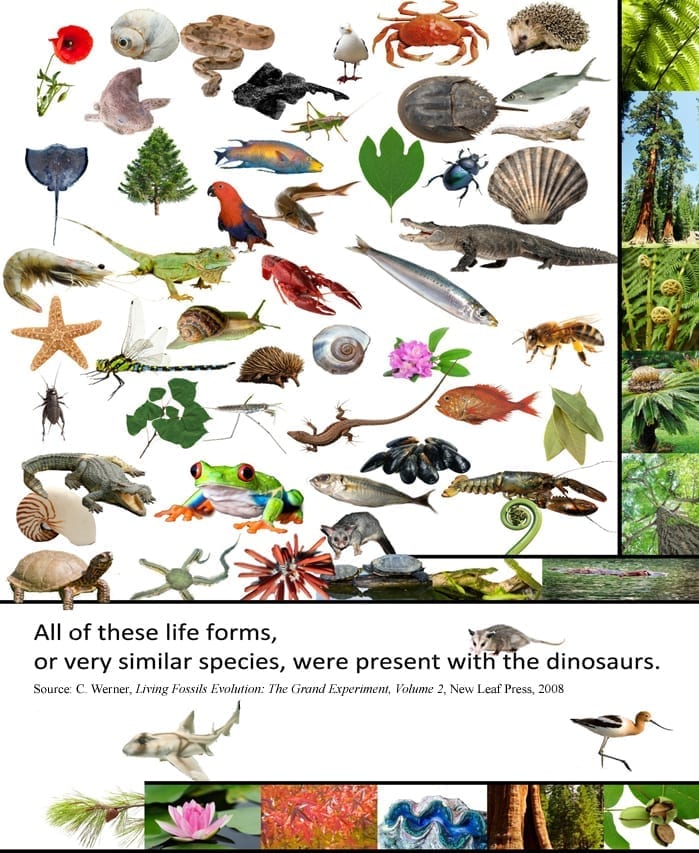 Dr Werner provides hard evidence that plants and animals have not change into other kinds over time and that what the Bible states that each produced according to its own kind[2] is confirmed. As well, being strong evidence that dinosaurs did not change into birds, they lived much more recently than 65 million years ago. For a blog on this very topic, go to: adefenceofthebible.com/2017/02/14/did-dinosaurs-really-become-extinct-65-million-years-ago.

So what generations of students have been told  regarding the fossil record has been shown to be incorrect and apart from being evidence for evolution, it is hard evidence against evolution.

[1] This book and volume one can be purchased from Creation Ministries International; website: creation.com.