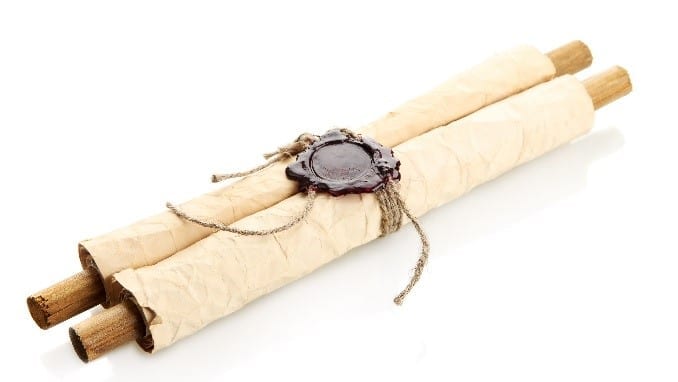 As papyrus and parchment gradually replaced clay tablets and as societies grew more sophisticated, the need to protect the contents of documents became important, the seal satisfied this need. The seal or signet, protected scrolls from tampering as shown. In some cases, documents were perforated and the binding material threaded through to prevent it from being removed without breaking the seal.[1]

Seals, (Latin bulla, plural bullae), were used to protect and provide authenticity of a document, hence

the term “Papal Bull” referring to a sealed statement from the pope. One is shown.  The instrument for making the impression was commonly a stone, in some cases a precious stone, or metal, frequently set in a ring worn on the finger with a distinctive design carved into it identifying the person and his title. Soft clay would be placed on the string and an impression made with the signet ring, registering the authority of the person who owned the ring.

The use of seals is mentioned many times in the Bible,[2] two examples are given:

1 Kings 21:8 referring to Jezebel; So she wrote letters in Ahab’s name and sealed them with his seal and sent letters to the elders and to the nobles who were living with Naboth in his city.

Daniel 6:17; A stone was brought and laid over the mouth of the den; and the king sealed it with his own signet ring and with the signet rings of his nobles, so that nothing would be changed in regard to Daniel.

So, not only kings had seals, so did nobles. And this is what is being found.

When a city was destroyed by fire, as happened to Jerusalem at the hands of the Babylonians in 586 BC, the scrolls would be burnt, but the clay seals would only become harder and more durable. Many have been found in archaeological digs, especially when the archaeological process of wet washing was used.

Examples of biblical seals which authenticated the people of the Bible

This compilation of seals is not complete, but it does show that seals with the identification of its owner and in many cases the owner’s title can be proof that the biblical character existed and in the position which the Bible stated him to have had.

The seal, containing a fingerprint on its left hand edge, reads “Belonging to Ahaz, [son of ] Jehotham, king of Judah.” It surfaced in the antiquities market in the early 1990s. Since such a seal would be very difficult to forge, it is believed to be authentic.[3] King Ahaz of Judah, ruled from 732-716 BC and is mentioned in 2 Kings 16 and 2 Chronicles 28. 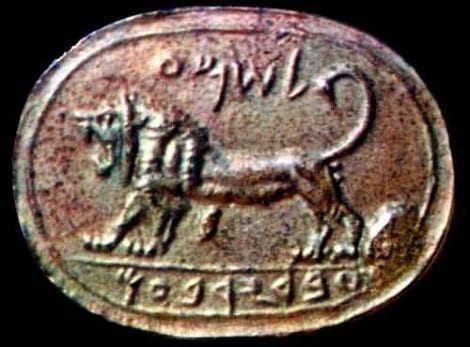 This seal was discovered in 1904 during the earliest excavation of Megiddo, led by Gottlieb Schumacher. This was a seal belonging to a royal minister in the 8th century BC. It is engraved with the figure of a roaring lion (symbol of the kingdom of Judah) with a beautiful curved tail and was skilfully fashioned. The inscription reads “Shema” on top, and “Servant of Jeroboam” on the bottom. Jeroboam II was king of the northern kingdom and he is mentioned in 1 Kings 11 and 2 Chronicles 10. 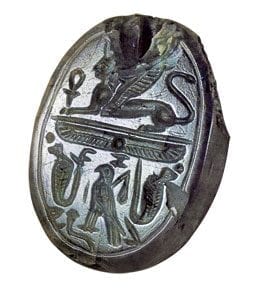 Discovered in 1964 and interpreted by Prof Marjo Korpel a Utrecht University Old Testament scholar, who confirmed it to be the seal of Ahab’s wife; the wicked Queen Jezebel. Although this assignment was initially questioned, it seems that there is now a consensus of support.[4] Jezebel is featured in 1 Kings chapters 16-22. 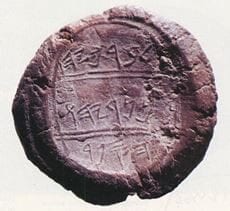 Known as the Baruch Bulla, it was discovered in 1975 and was studied by Israeli archaeologist Nahman Avigad. The three lines on the Baruch bulla read: “(Belonging) to Berekhyahu, the son of Neriyahu, the scribe.”  The suffix -yahu was a common epithet attached to names in Judah, meaning, “blessed of Jehovah.”  While translations sometimes render it  “-iah” (cf. Baruch’s father Ner-iah), some texts drop it altogether. The bulla is now displayed in the Israel Museum in Jerusalem.

10 I signed and sealed the deed, had it witnessed, and weighed out the silver on the scales. 11 I took the deed of purchase—the sealed copy containing the terms and conditions, as well as the unsealed copy— 12 and I gave this deed to Baruch son of Neriah, the son of Mahseiah, in the presence of my cousin Hanamel and of the witnesses who had signed the deed and of all the Jews sitting in the courtyard of the guard. 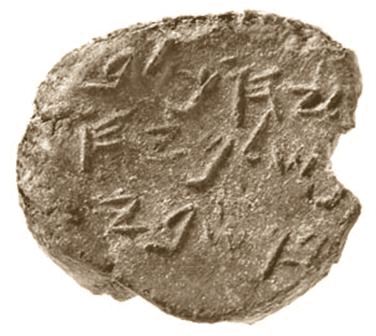 While Jerusalem was under siege from the Babylonians (588-586 BC), Jeremiah urged the people to surrender and live, while those who do not will die. This was a message he received from God.[5] As a consequence, some of King Zedekiah’s courtiers took Jeremiah and threw him into a cistern which was empty, although Jeremiah did sink into the mud. Two of these courtiers were Jehucal son of Shelemiah and Gedaliah son of Pashur.[6]

In 2005 archeologist Dr Eilat Mazar of the Hebrew University of 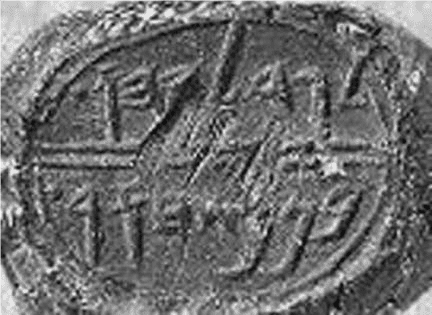 Jerusalem discovered a clay seal (top) when she was digging near the Dung Gate of the Old City. It was dated to the sixth century BC and the Paleo-Hebrew writing on it was translated as: belonging to Jehucal son of Shelemiah son of Shovi.

While digging further in 2008 in the same area, Dr Mazar discovered another seal also dated to the sixth century BC, this time with the inscription: Gedaliah son of Pashur.

The significance of these seals is that they confirm the reliability and accuracy of the Bible even down to the names of the king’s officials.[7] 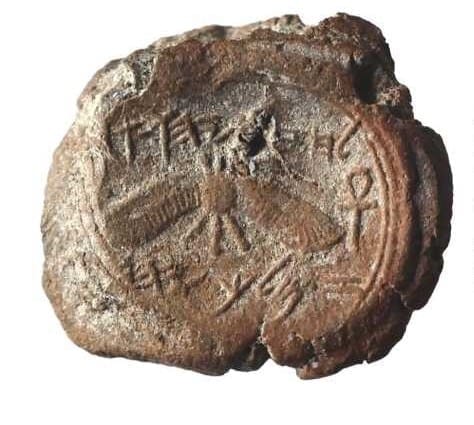 The Hebrew University of Jerusalem announced a significant discovery on December 2, 2015; the first seal impression of a Judahite king ever found by archaeologists during an archaeological dig, in Jerusalem.

The impression says, “Belonging to Hezekiah [son of] Ahaz, king of Judah.”

Although seal impressions bearing King Hezekiah’s name have already been known from the antiquities market since the middle of the 1990s—some with a winged scarab (dung beetle) symbol and others with a winged sun—this is the first time that a seal impression of the Judean king has ever come to light in a scientific archaeological excavation, Dr Eilat Mazar said in the Hebrew University press release.

In March, 2019, archaeologists discovered not only a seal but also the stamp that formed it (pictured left.) The finds were made by a team from the Israel Antiquities Authority and Tel Aviv University that 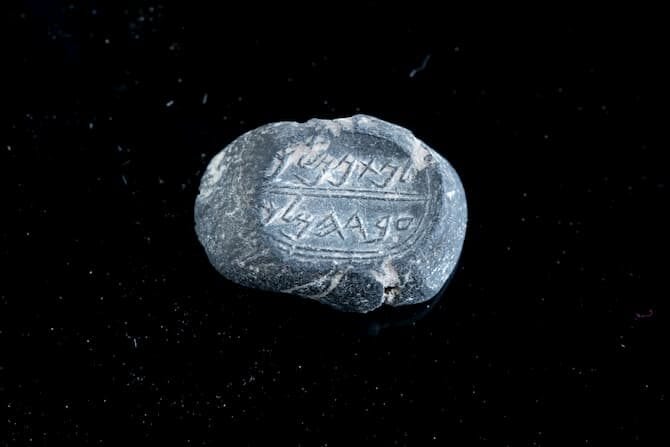 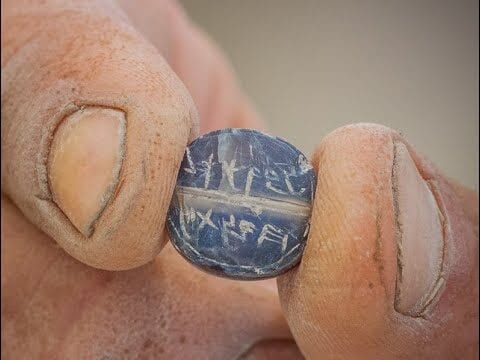 was excavating beneath the former Givati parking lot in Jerusalem, just south of the Temple Mount. The seal impression is pictured right. Its inscription when translated reads; to Nathan-Melech, the king’s servant. Nathan-Melech is a name that appears only once in the Bible, in the Second Book of Kings:

Dr. Yiftach Shalev of the IAA, said he needed only a few minutes to read the ancient Hebrew on the clay bulla, which dates to the middle of the seventh or beginning of the sixth century B.C., judging by the style of writing on it and the pottery found next to it. All of this tie in beautifully with Nathan-Melech being the servant of Judahite king Josiah and the sacking of Jerusalem in 586 BC by the Babylonians.

More pieces of evidence that are added to the ever-growing mountain that supports the integrity of the Bible. For a list of 83 people mentioned in the Bible who have been confirmed from sources outside of the Bible, go to:  https://www.adefenceofthebible.com/2017/06/26/confirmation-of-83-people-mentioned-in-the-bible.

Evidence from science, archaeology and ancient texts shows that the Bible is unique in all ancient literature. The people were real, the places mentioned really existed and the events described between its pages actually happened. This provides enormous confidence for us to believe the things in the Bible that cannot be tested like the sinfulness of mankind and the fact that the Creator of the heavens and of all life, left His glory on high to be born a mere man to live among His people and to pay the penalty for the sins of the world, so that all who really believe may have eternal life with Him.

[7] Both images are courtesy of Generation Word (generationword.com).