The Religion of Climate Change

There is a current epidemic of fear due to rising carbon dioxide levels in the atmosphere from 310 ppm to 405 ppm, although this increase is questioned,[1] giving rise to higher global temperatures as shown on the graph below[2] and becoming what is called “Climate Change.” 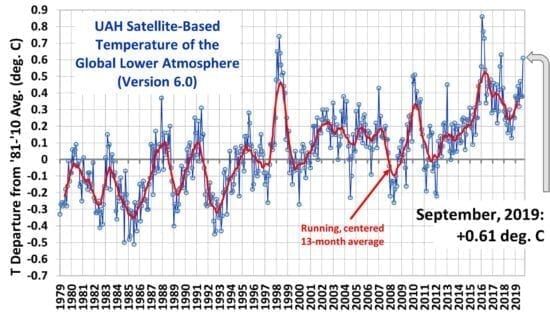 Notice that the graph is only over a 40 year period because the measurements were made by satellites and they do not represent the thousands of years of our existence. In fact, the 1970s recorded low ground level world temperatures to such an extent that climate scientists feared that we might be heading toward another ice age, for more on this, see below. So, this graph starting from a low base and with its short time span gives no perspective. History testifies that large temperature variations have been experienced in the past. For example, A study of tree rings suggest that the Britain and Europe of 2,000 years ago, experienced a lengthy period of hotter summers than today.[3] The Romans were growing vineyards in central and northern Britain showing that the climate was warmer then.[4] Then, there was the “Little Ice age” of Elizabethan England when the Thames river froze over completely.[5] The NASA Earth Observatory notes three particularly cold intervals: one beginning about 1650, another about 1770, and the last in 1850, all separated by intervals of slight warming.[6]

The earth’s climate was much warmer in the distant past 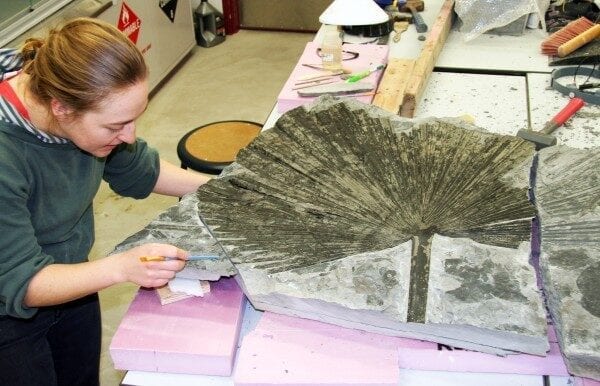 Fossils of plants that only grow in warm climates have been discovered in areas that are much colder today. For example, this six-foot (1.8 metres) diameter palm leaf was discovered in Alaska.

The author of the article[7] states: The very presence of palm trees in this region indicates a much warmer period in Earth’s history.

A Google search will reveal many more examples.

We have evidence of the climate changing in the past. So, is the recent little bit of warming due to the increase of carbon dioxide in our atmosphere? Even if it is, to take the last forty years of world temperatures as a predictor of doom for the planet is quite unrealistic.

Carbon dioxide is a necessary component of the natural cycle of all life. Plants absorb CO2 from the atmosphere and with the help of photosynthesis, convert it to glucose, which in turn polymerises to cellulose and starches which are the main constituents of the plant’s structure. Animals eat the vegetation, extract energy from it and convert it back to carbon dioxide. It is hard not to see that design has taken place. In fact, it has been estimated that if atmospheric levels of carbon dioxide were to fall below 150 ppm, all life on earth would be extinguished.[8]

The more carbon dioxide there is in the atmosphere which can be referred to as “plant food”, the more abundant is the plant life. This, has been shown to be the case in a study by Australian scientists. Their report was published in Climate News Network under the heading, Study Finds Plant Growth Surges as CO2 Levels Rise. Head of the CSIRO research team, Dr. Randall Donohue stated; Even if nothing else in the climate changes as global CO2 levels rise, we will still see significant environmental changes because of the CO2 fertilization effect.[9]

Carbon dioxide is used to stimulate growth in commercial hot houses as this article advises: If you are green to gardening you might not know that carbon dioxide, the gas we all exhale, is critical to plant 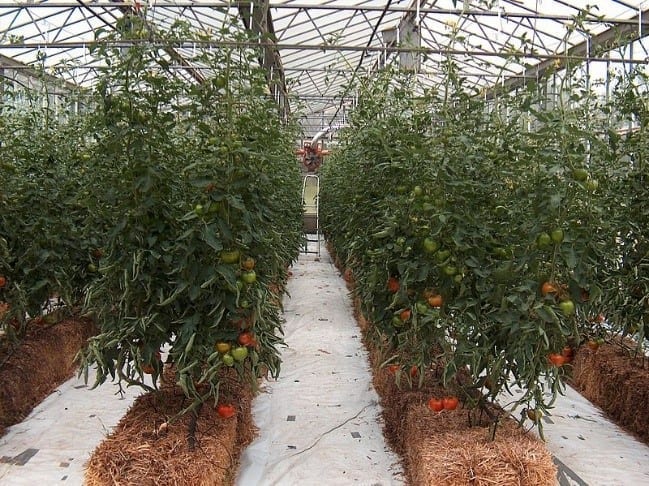 growth and development. Photosynthesis, the process through which plants use light to create food, requires carbon dioxide. CO2 concentration in ambient air ranges from 300-500 parts per million (ppm), with a global atmospheric average of about 400 ppm. If you are growing in a greenhouse or indoors, the CO2 levels will be reduced as the plants use it up during photosynthesis. Increasing the CO2 levels in these environments is essential for good results. Additionally, there are benefits to raising the CO2 level higher than the global average, up to 1500 ppm. With CO2 maintained at this level, yields can be increased by as much as 30%![10]

The very large fossil plants of varieties present today, for example, the palm leaf shown above, is evidence for the carbon dioxide level in the past being very much higher than today.

Greenhouses work by being made of clear light transmitting material such as glass or plastic. Sunlight passes through and is either absorbed by the plants or reflected. But on reflection, the wavelength of the light is increased to the infrared end of the spectrum which is absorbed by some of the molecules of the air inside the greenhouse causing them to vibrate more and in doing so, increases the air temperature.

This same process keeps the earth warm with our atmosphere acting the same as the glass on a greenhouse and air trapped in our atmosphere absorbs the reflected infrared radiation. The molecules that absorb the radiation are water, carbon dioxide, methane, nitrous oxide and miscellaneous gases (ozone, CFCs etc). Note, nitrogen (78% of the air) and oxygen (21%) do not absorb infrared radiation and are therefore not greenhouse gases.

The amount of each of these gases in the earth’s atmosphere are: Carbon dioxide 405 ppm; Methane 1.8 ppm, Nitrous oxide 0.33 ppm.[12] The water-vapour content of the atmosphere varies from place to place and from time to time because the humidity capacity of air is determined by temperature. At 30 °C, for example, a volume of air can contain up to 4% (40,000 ppm) water vapour. At -40 °C, however, it can hold no more than 0.2 percent.[13] As a consequence, water vapour is by far the most abundant greenhouse gas in the atmosphere.

Greenhouse gases vary in the amount of infrared radiation they absorb. This “contribution” needs to be considered in any calculation of greenhouse gases. So the concentration of the gas is multiplied by its Global Warming Potential (GWP) based on carbon dioxide as being 1, to arrive at the gas’s contribution. These are shown in the table below. Water vapour, when taken into account, dwarfs all other greenhouse gases.

Anthropogenic (man-made) Contribution to the “Greenhouse
Effect,” expressed as % of Total [14]These calculations were made from data provided from U.S. Environmental Protection Agency (2003).

The percentage of carbon dioxide in the earth’s atmosphere from human activity is estimated at only 3-4%. It is hard to find how this figure is arrived at, but it is frequently used. It does however demolish the arguments of the Climate Change cult as shown above and below.

The diagram below shows how little contribution anthropogenic (man-made) gases have on the total amount of greenhouse gases in earth’s atmosphere.[15]

There is nothing we can do to change the climate and God tells us that He controls the climate in this cursed world.[16]

Below is a 30 second YouTube clip of an interview he had with journalist Andrew Bolt and it is worth watching.

The Guardian newspaper headline (October 8, 2018): “We have 12 years to limit climate change catastrophe, warns UN.” And again, from the same newspaper on December 2, 2018: “Portrait of a planet on the verge of climate catastrophe.”

On March 28, 2019 the Seventy Third session, High Level meeting on Climate and Sustainable Development of the United Nations stated that we have only eleven years left to prevent irreversible damage from climate change.[19] 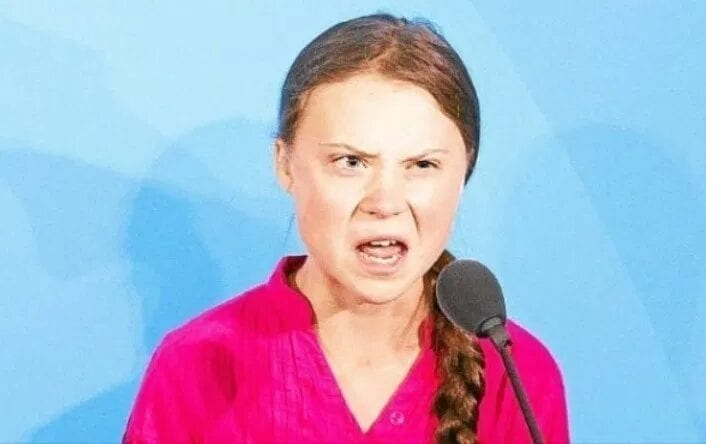 The idea that our society will collapse in 2030 due to severe global weather conditions is now widely promulgated and is frightening young people in particular, as they will have no future. Witness  Swedish activist, sixteen you old Greta Thunberg’s hysterical, clearly scripted,  address to the United Nations on September 24, 2019. View this five minute you Tube, here: www.youtube.com/watch?

On the same day that Greta Thunberg gave her impassioned speech to the UN, a group of more than 500 prominent climate scientists and professionals submitted a letter to the Secretary-General of the United Nations, stating “there is no climate emergency, and therefore, no cause for panic and alarm.” https://caldronpool.com/over-500-scientists-say-there-is-no-climate-emergency/amp.

Another list of climate scientists who oppose anthropocentric global warming can be found here: https://en.wikipedia.org/wiki/List_of_scientists_who_disagree_with_the_scientific_consensus_on_global_warming

Here are a few more articles that appears in the media in the 1970s:

“Scientists Ask Why World Climate Is Changing:  Major Cooling May Be Ahead.”  New York Times, May 21, 1975

So how is the world doing? Are systems collapsing?

Australian Journalist Andrew Bolt has published eleven facts, along with their original sources, which show that we are in no danger of imminent climate catastrophe in fact, quite the opposite.[22]

Be calm. You are not in danger.

The Christian Response to Climate Catastrophe?

Genesis 8:21-22. After the Flood and Noah, his family and the animals were safe, God made this promise: …And never again will I destroy all living creatures, as I have done. As long as the earth endures, seed time and harvest, cold and heat, summer and winter, day and night will never cease.

God says that times and seasons created by Him in the beginning, will never cease until the end of history. So, whatever the temporal variations may be, God is in control and He has guaranteed the seasonal future.

The religion of Climate Change bases it whole theology on a slight increase in atmospheric temperature over only a 40 year period which commenced at a point of recorded low surface temperatures. This has resulted in trillions of dollars being spent on renewables which can only provide electricity intermittently when the sun is shining and the wind is blowing. Millions of tons of aircraft fuel have been burnt in flying dignitaries across the globe for talk fests and young children have been frightened witless because the end is nigh.

An internationa study of  major weather and extreme events has found no evidence of a “climate emergcy” in the record to date.

The study was led by Gianluca Alimonti from the Italian National Institute for Nuclear Physics and the University of Milan and published Eupean Physical Journal Plus.