Jesus’ Gift to Peter and his Fishing Partners

Luke chapter five verses 1 to 11 relates an account of Jesus speaking to people at the edge of Lake Gennesaret (also known as the Sea of Galilee). There were two fishing boats at the water’s edge and the fishermen were cleaning their nets.[1] Jesus asked one of the fishermen, Peter, if he would push the boat out a little so that the crowd could hear Him better. Sound travels very well over water, as well it would remove Jesus from the press of the crowd. Peter consented, Jesus gave His message and it appears as a gift of thanks, Jesus told Peter to: Put out into the deep water, and let down their nets for a catch. After 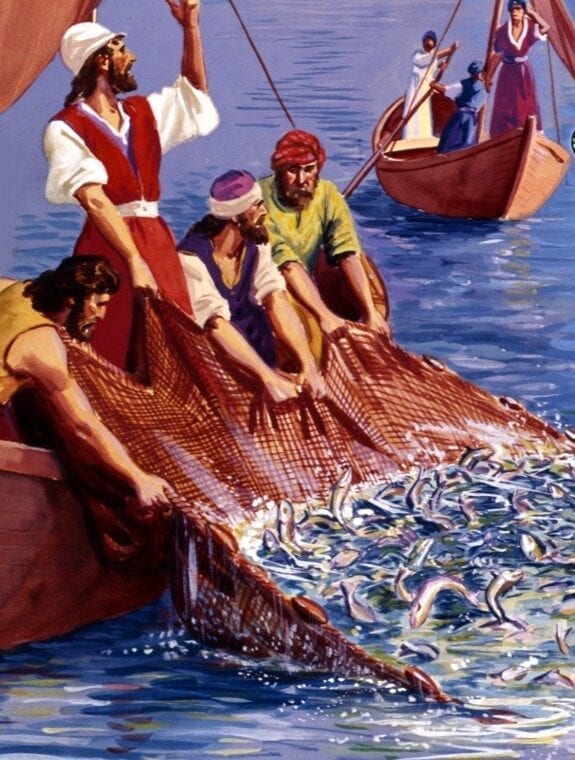 a little protestation because the men had been fishing all night and had not caught any fish, Peter agreed because it was Jesus who made the request.

Verse 6-7: When they had done so, they caught such a large number of fish that their nets began to break. So they signalled to their partners in the other boat to come to help them, and they came and filled both boats so full that they began to sink.

Question. What was the miracle worth in financial terms to the fishermen?

Remarkably, William P Houser and Rochelle A Houser worked out an approximate value. Their article can be found through  https://independent.academia.edu/ShelleyHelzermanHouser What made this calculation possible is the discovery of a fishing boat of Jesus’ time.

This boat, which became known as the Jesus Boat, was discovered by two brothers, Moshe and Yuval Lufan in 1986, who, as amateur archaeologists, went to the Sea of Galilee in search of artefacts during a severe drought. When they saw an object emerging from the mud as the water retreated, they alerted archaeologists from the Israel Antiquities Authority who spent 12 days clearing away the mud, until they uncovered the remarkably well-preserved 2,000-year-old boat. The waterlogged timbers had the consistency of wet cardboard. Because evaporation would cause the boat to collapse, it had to be sprayed with water day and night and shaded from direct sunlight. Then, excavators and volunteers released the boat from its muddy surroundings and encased it in a polyurethane foam “straitjacket” to hold it together. Then, it was wrapped in fiberglass and foam and floated to a new location and kept in a protective wax bath for 12 years until it was ready for display in the Yigal Alon Museum in Kibbut Ginosar, Israel. 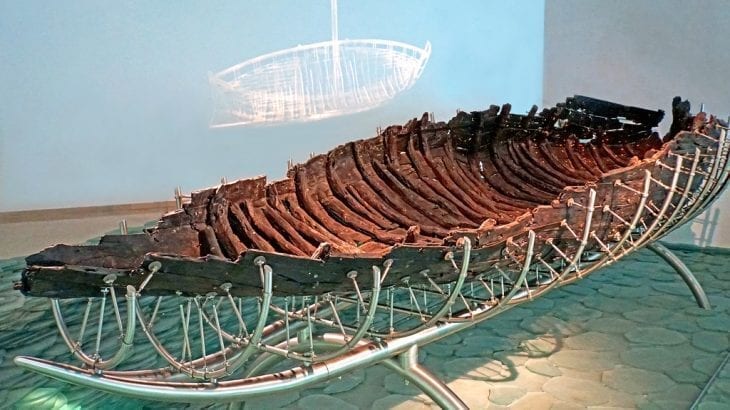 Radiocarbon dating places the boat’s construction to between 40 BC and AD 50. As well, the way it was built, with cedar planks joined together by pegged mortise and tenon joints match the type of boats built at that time. Further, it was found to have been made from 10 different types of wood, which may indicate that there was a wood shortage, or that the boat was made of scrap wood, or that it had undergone many repairs.[2] 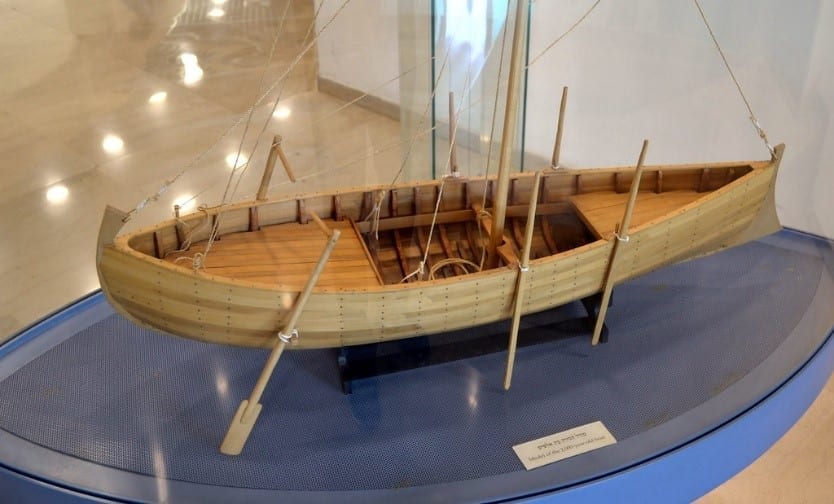 enough to hold 13 men as Jesus and His twelve disciples frequently sailed across the Sea of Galilee.[3],[4],[5] On one occasion, Jesus was asleep in the stern of the boat.[6] So, there must have been plenty of room.

The model in the image, shows how it would have looked originally. Credit: Model of Jesus Boat https://www.flickr.com/photos/larrywkoester/37272270670.

How much fish could two similar boats hold?

Systems were in place for selling fish dating from Old Testament times. Nehemiah warned people from selling fish on the Sabbath; Men from Tyre who lived in Jerusalem were bringing in fish and all kinds of merchandise and selling them in Jerusalem on the Sabbath to the people of Judah.[7] So, these men were able to transport fish all the way from Tyre to Jerusalem. In fact, one of the gates of Jerusalem was known as the Fish Gate.[8] Markets were very common in Jesus’ time.[9] And since the main occupation of the men living around the Sea of Galilee was fishing, there would have been adequate ways of selling the fish.

Fish was a very common food in the time of Jesus and it could be kept by preserving it by either drying and/or salting.[10] Jesus fed the 5,000 from five loaves and two small fish a boy was carrying.[11] So in that hot climate, the boy’s fish must have been preserved in some way. The Greek name for Magdala, the home of Mary Magdalene is Tarichaea, which is derived from the word, ‘to preserve’ and indicates that preserving fish was a key industry there.[12] Magdala is situated on the western shore of the Sea of Galilee just 4 km from where Peter lived at Capernaum.

What this means is that for the fishermen to realize the full extent of Jesus’ miraculous provision, some of the fish could have been sold fresh and some preserved.

Fish of the Sea of Galilee[13] 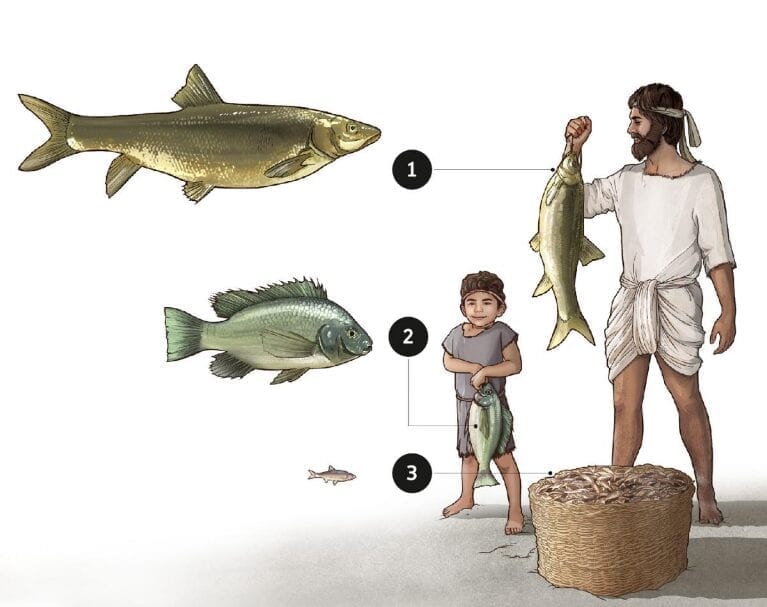 About 18 species of fish live in the Sea of Galilee. Of that number, only about ten have been sought by fishermen. These ten can be divided into three commercially important groups. One group is the binny, also known as the barbel (Barbus longiceps is shown) (1). Its three species display barbs at the corners of the mouth; hence, its Semitic name biny, meaning “hair.” It feeds on molluscs, snails, and small fish. The longheaded barbel reaches a length of 75 cm (30 in.) and can weigh over 7 kg (15 lb). The second group is called musht (Tilapia galilea is shown) (2), which means “comb” in Arabic, because its five species display a comb like dorsal fin. One variety of musht reaches a length of about 45 cm (18 in.) and can weigh some 2 kg (4.5 lb). The third group is the Kinneret sardine (Acanthobrama terrae sanctae is shown) (3), which resembles a small herring. From ancient times, this fish has been preserved by pickling.

What was the catch worth?

The Housers have attempted to answer this question as well. The closest they could obtain the cost of commodities to Jesus’ time was an extensive list called Diocletian’s Edict of Maximum Prices, which was issued in AD 301. This gives two prices for fish, one for first quality and one for second quality. The amount of money the fish would have raised was between 699,272 – 1,048,908 Denarii communes. In order to give meaning to this figure, they then converted the total value to years of work and then divided it by four for each fisherman. And arrived at how many years each man would have had to have worked to obtain the same amount of money the fish was worth.

This miracle of Jesus is easy to skip over and to not realise the full extent of His blessing. The Housers have given us some idea of the magnitude of this gift. Whether the fishermen converted all of the fish into money, or only some of it and gave away part of the catch to family and/or friends we do not know, but now we do have some appreciation of the full extent of Jesus’ gift. In this respect, they make the observation: The estimated range of pay Peter and his partners received was enough for them to retire from the fishing business and work full-time for God.

They also make the point that it was Peter who protested when Jesus commented that it is easier for a camel to go through the eye of a needle than it is for a rich man to enter the kingdom of God.[14] Maybe Peter saw himself as being a rich man.

Now unto him who is able to do exceedingly abundantly above all that we ask or think, according to the power that is worketh in us, (Ephesians 3:20).