Some Interesting Facts about the Bible

Fact 1 What the Bible is

The Bible is the method by which the Supernatural Being (the God of the Bible) who created everything has chosen to communicate with the pinnacle of His creation: mankind. How do we know? We know because the Bible says so: 2 Timothy 3:16: All Scripture is breathed out by God… So, when Moses wrote about the creation in the first few chapters of Genesis, his mind was being guided by God. And when Isaiah wrote about Cyrus being king of Persia approximately 150 years before Cyrus was born (Isaiah 45:1-3) and when he wrote about the coming Messiah (chapter 53); His linage, incarnation (coming in human form) and His death in accurate detail some 700 years before Jesus was born, his mind was being guided by God.

Fact 2 The uniqueness of the Bible

The Bible is unique throughout literature. About 40 writers, ranging from kings, farmers, prophets and fishermen, to a tax collector, a doctor, a Rabbi, a cupbearer, a military General, and others, wrote it over a period of 1,600 years. It was written on three continents (Asia, Africa[1] and Europe) and in three languages (Hebrew, Aramaic and Greek) — but it is one coherent historical account from start to finish, with salvation through faith in Jesus Christ as its theme.

Fact 3 Languages it was written in

Fact 4 Origin of the name Bible

The word Bible is from the Greek word biblion which means any kind of written document, though one originally written on papyrus (biblos). The English word Bible comes from the Latin biblia meaning “book.” The singular in Latin gives witness to the fact that the 66 books—39 of the Old Testament and 27 of the New Testament reveal such a unity of thought and purpose that together they form one book.[2]

Fact 5 When it was compiled

The full canon of scripture was not finally compiled until AD 367 when the Bishop of Alexandria, Athanasius, set out the 27 books of the New Testament in their present form in his Easter letter in an effort to protect his flock from the heretical writings circulating at the time. Though, the writings (letters and books) were held up as inspired scripture and circulated among the churches at the time of the apostles. His compilation was confirmed by the councils at Hippo in 393 and at Carthage in 397.[3]

The present chapter divisions of the Bible were devised by Stephen Langton (died 1228), a professor in Paris who later became Archbishop of Canterbury. He placed them into a Vulgate edition of the Bible.

The Old Testament was divided into verses by Rabbi Nathan in 1488 and the New Testament by Robert Stephanus who placed them in a Greek New Testament in 1551. He published them in an edition of the Latin Vulgate in 1555 which was the first Bible to have the present chapters and divisions. The first English Bible with these divisions was the Geneva Bible of 1560.[4]

The Bible is the first and undisputed best-seller of all time and no other book is likely to take its place. Best estimates put the total number of Bibles printed to be in excess of 4 billion. 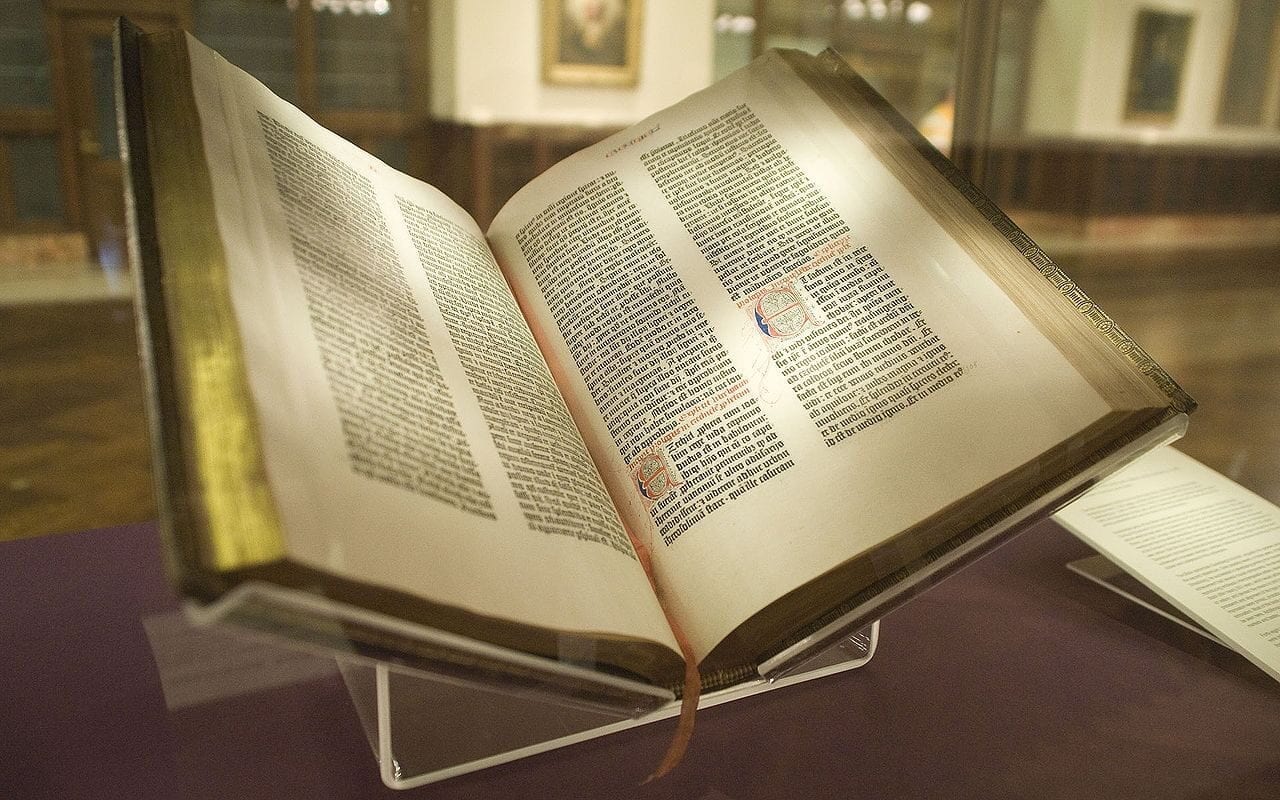 The Bible was the first book to be printed by Johannes Gutenberg after he invented the movable type printing press. This was carried out in Mainz, Germany in the 1450’s. The exact number printed is unknown. Only 21 complete copies survive. The one shown here is held in the New York public Library. Credit: Wikimedia commons.

The Bible has been translated into in excess of 2,000 language groups which cover over 90% of the world’s population.

A geometric progression gives the life spans of the patriarchs in their correct order and all are on the lineage to the Messiah. Notice the order of the integers; 7, 5, 3 and the order of the squares 52, 62, 72

Fact 12 Luke wrote the most

Although Luke wrote only two books, the gospel that bears his name and the Acts of the Apostles, he wrote more with those two books than Paul wrote with his 13 books.

There is no theology here, just a series of coincidences.

In the 1500’s in England, Latin was the language of religion and all business was conducted in French. English was only spoken by the peasant class. However, two literary masterpieces promoted the English language significantly: they were the writings of William Shakespeare and the King James Bible. They are connected in another way as well. When the King James Bible was published in 1611, William Shakespeare was 46 years old and psalm 46 has his name encoded in it: the 46th word of psalm 46 is shake and the 46th word from the end of chapter 46 is spear. The same is true for the current King James Bible which was written in 1769.

[1] Moses would have written the first five books of the Bible while he was in the Sinai desert which is regarded as being part of Africa, see: wikipedia.org/wiki/Geography_of_Africa, retrieved June 18, 2011. [2] Wycliffe Bible Dictionary, 1998, page 230. [3] https://en.wikipedia.org/wiki/New_Testament. [4] Zondervan Illustrated Bible Dictionary, 2011, page 200. [5] I am not a mathematician and geometric progression was the best term I could find to describe the series of numbers. It may be incorrect and there may be a more appropriate term.