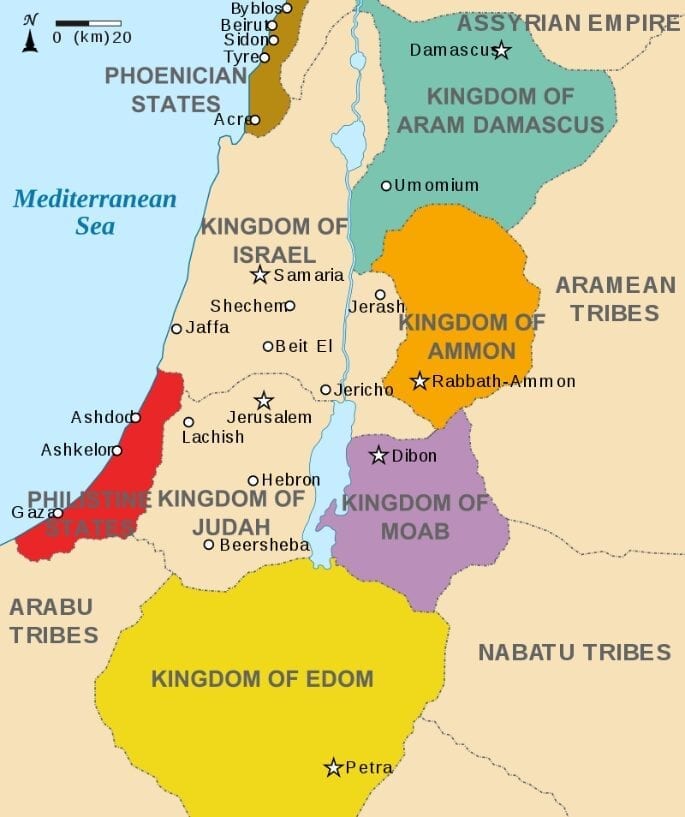 The forefather of the Moabites was Moab, a product of an incestuous union between Abraham’s nephew Lot and his eldest daughter.[1] They settled east of the Dead Sea and came into prominence when Ruth a Moabitess, married the Judahite, Boaz and eventually became the great grandmother of king David.[2] Omni, the king of Israel,( the Northern Tribe) conquered Moab and made it a vassal state. His son Ahab continued to extract taxes in the form of a percentage of Moab’s agriculture. But when Ahab died and his son Joram took the throne, the king of Moab saw his opportunity and successfully attacked Israel and in doing so, reclaimed his territory and threw off the shackles that had bound Moab. Also, he restored some of their cities. He had his successes recorded on a stele (a stone with writing) and had it erected in his fortress at Dibon. 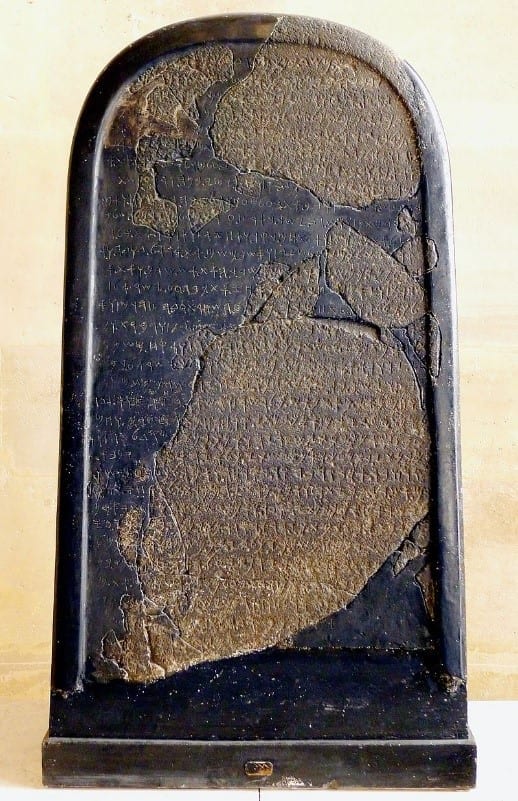 In 1868, the Reverend F A Klein, a German missionary for the Church of England, while travelling through the territory formerly occupied by the tribe of Reuben, was informed by an Arab sheik of a remarkable stone inscribed with writing and lying at Dibon (now Dhiban in Jordan). The stone was bluish basalt neatly cut into a monument about 120 cm by 60 cm (4 foot by 2 feet) with its upper end curved and a raised rim enclosing an inscription. Klein informed the authorities of the Berlin Museum. Meanwhile M Ganneau of the French consulate at Jerusalem and a captain Warren made a paper mache’ impression (squeezes[3]) on the writing to secure the text of the inscription. While the French and the Germans were bargaining with the Turks for the stone, the Arabs argued that if the stone as a whole was of value, it would be far more valuable if cut into pieces.[4] So, they built a fire around it and when hot, poured cold water over it and it shattered. Fortunately, its text had been preserved. Two large and eighteen smaller surviving fragments were joined together in the Louvre, which had acquired them in 1873.[5] The re-assembled Moabite Stone resides in the Louvre in Paris.[6]

The writing on the stone, consisted of 34 lines, written in the Moabite language which was very close to Hebrew. It was authored by Mesha, king of the Moabites and written in the first person, during the time of Amaziah (king of Judah) and Joram (king of Israel). It gives his side of the events that are described in 2 Kings chapter 3. It reads in part:

I, Mesha, king of Moab, made this monument to Chemosh[7] to commemorate deliverance from Israel. My father reigned over Moab thirty years, and I reigned after my father. Omri, king of Israel, oppressed Moab many days and his sons after him. But I warred against the king of Israel and drove him out, and took his cities, Medeba, Ataroth, Nebo, and Jahaz, which he built while he waged war against me. I destroyed his cities and devoted the spoil to Chemosh and the women and girls of Ashtar. I built Qorhah with prisoners from Israel. In Beth-Diblathaim, I placed sheep-raisers.

Further value of the stone is seen in line 31 of its inscription. Using the paper impression, epigrapher, Andre Lemaire discovered the phrase, House of David, which makes it the second recording of the name.[8] The first being The House of David Inscription found at Tell Dan see my blog article here.

The Mesha Stele provides us with a remarkable extrabiblical reference to the dynasty of David, a view into the political and military climate of the nineth century BC, the names of surrounding cities; Dibon, Aron, Madada and Aroet and personal names mentioned in scripture; Yahweh, Mesha, Omri and Omri’s son (Ahab). Also, it provides us with information not stated explicitly in scripture—how Moab repossessed the land that was for so long controlled by David and Solomon. We now know that King Mesha wrestled control of the region from Israel soon after the beginning of the divided kingdom.[9]

Once again, archaeology confirms the people, places and events that are mentioned in the Bible because the Bible is an historical record.  In doing so, it provides further evidence for its integrity.

[3] A squeeze or squeeze paper is a reverse copy of an inscription, made by applying moist filter paper and pushing into the indentations by percussive use of a stiff brush. The paper is allowed to dry and then removed. The image is reversed from the inscription, and protrudes from the squeeze paper.

[4] An alternative account of why the stone was broken is that the local residents thought that there was treasure inside it. (Douglas Connelly, Amazing Discoveries That Unlock the Bible, Zondervan, 2008, page 38.)

[7] The god of Moab. The Ammonites also worshipped this deity along with Molech. Solomon introduced the worship of Chemosh into Jerusalem to please a foreign wife 1 King 11:7, 33).