The Bible tells us that while the Israelites were slaves in Egypt, they had to make bricks for the Pharaoh’s building projects. Exodus 1:8-11 states:

Then a new king, to whom Joseph meant nothing, came to power in Egypt. “Look,” he said to his people, “the Israelites have become far too numerous for us. Come, we must deal shrewdly with them or they will become even more numerous and, if war breaks out, will join our enemies, fight against us and leave the country.”

So they put slave masters over them to oppress them with forced labor, and they built Pithom and Rameses as store cities for Pharaoh.

That same day Pharaoh gave this order to the slave drivers and overseers in charge of the people: “You are no longer to supply the people with straw for making bricks; let them go and gather their own straw.  But require them to make the same number of bricks as before; don’t reduce the quota. They are lazy; that is why they are crying out, ‘Let us go and sacrifice to our God.’  Make the work harder for the people so that they keep working and pay no attention to lies.”

There are several pieces of information we can glean from these pieces of scripture.

Is there any archaeological confirmation of these verses?

Buildings in ancient Egypt were constructed from either stone or mudbrick. Temples were generally built with stone and they were meant to last throughout the ages. Palaces on the other hand, were built for comfort out of mudbrick, which was cool in the day and warm at night. Each type of construction was considered specialised labour: in other words, people who did one did not do the other.[1]

Giovanni Anastasi (1765–1860) was born to an Armenian family from Damascus. He established himself as a wealthy merchant and antiquarian. He sold large collections of antiquities to many national museums. The British Museum acquired from Anastasi, a collection of antiquities and among them many Egyptian papyri which were assigned by his name.[2] For example, Papyrus Anastasi Ⅱ, Ⅲ, Ⅴ etc. 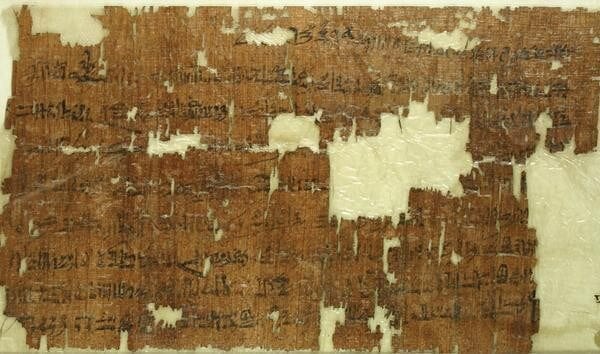 We know from Papyrus Anastasi III (3.1–2) (shown) that the Egyptians set quotas for brickmakers: Likewise, people are making bricks … they are making their quota of bricks daily. Brickmaking was a labor specialization normative for slaves in ancient Egypt.[3]

Some of these papyri provide information regarding brick making of the Hebrew slaves. For example, Papyrus Anastasi IV expresses one Egyptian soldier’s frustration over the lack of skilled labor and supplies: I am residing at Qenquen-en-ta, without provisions, and neither men to make bricks nor straw are in the region.[4] This papyrus confirms that straw was used in brickmaking.

The Papyrus Anastasi VI from around 3200 years ago describes how the Egyptian authorities allowed a group of Semitic nomads from Edom who worshiped Yahweh to pass the border-fortress in the region of Tjeku (Wadi Tumilat) and proceed with their livestock to the lakes of Pithom.[5] More evidence of the presence of Semitic[6] people in Egypt.

The Merenptah stele, named after the Egyptian pharaoh, bears the first mention of an entity called Israel in Canaan. More about this in a future blog article.

Rekhmire was an ancient Egyptian noble and official of the 18th dynasty who served as “Governor of the Town” (Thebes) and Vizier during the reigns of Thutmosis III and Amenhotep II. A relief in his tomb shows Semitic and Nubian slaves making bricks. Egyptian supervisors monitor them as they gather mud and water, mix the materials, form mudbricks, carry dried bricks, and measure a mudbrick wall.[7]

Located in Thebes, Rekhmire’s tomb dates to the 15th century BC. A hieroglyphic text identifies that the bricks in this scene were intended for renovating workshops at Karnak Temple. In ancient Egypt, brickmaking was a specialized form of labour relegated to slaves.

The following explanation and translation of the hieroglyphics of the painting are given by; Osirisnet, Tombs of Ancient Egypt.[8]

The manufacture and transport of bricks

The slaves working here are: The captives that His Majesty has bought back to work in the temple of Amun. One thus understands the presence of light-skinned Asian (others have referred to them as Semitic) and dark-skinned Nubians dressed in leather loincloths. Their task is explained: Making bricks to rebuild nine workshops of Amun in Karnak.

The reservoir where men will draw water is represented as an ornamental pond, surrounded by trees, with a green bank and having rippled water with floating lilies. Two workers draw up water for the production of bricks. These are made using a mixture of the Nile mud and chopped straw, worked with hoes or by trampling; the mixture is then brought to brick makers who mould the bricks using a wooden template, and then line them up in the sun to dry.

Transportation deals with white rectangular blocks (limestone) and pink (another stone?); the latter are stacked in front of an Asian who, kneeling, holding his hoe to the right. A heavily loaded Nubian is trying to stand up again while one of his companions is already walking to his destination. A porter returns empty handed, yoke on shoulder and meets a man who carries a single block of limestone (white).

Below, are the remains of buildings at the ancient city of Pithom, which were constructed at the time of the Exodus. Image credit: https://bibleistrue.com/qna/pqna55.htm. 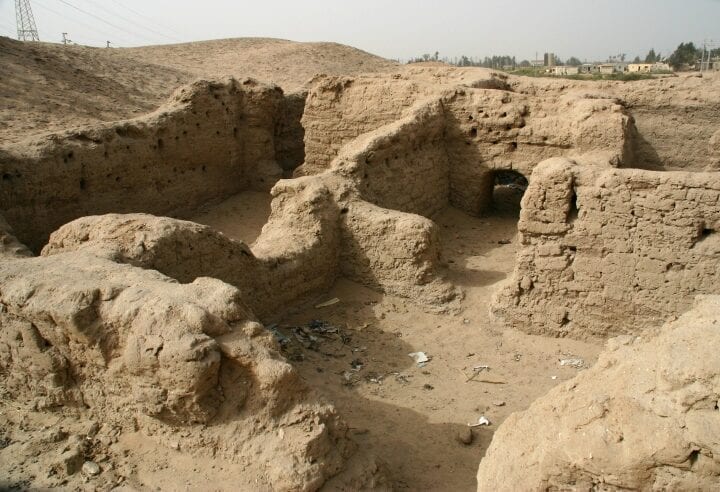 In order to test the accuracy of scripture, Robert Littman and associates, went to Timai in the Nile delta region where the remnants of some ancient mudbrick buildings remain, learnt the process from some locals and commenced work.[9] They established the following facts:

All of the statements made in the Bible have been verified.

As always, when statements made in the Bible are fully investigated, they prove to be correct.

[6] A people who were descended from Noah’s son Shem. See Table of Nations, Genesis 10:21.