Drawing and writing with ink from fossil octopuses 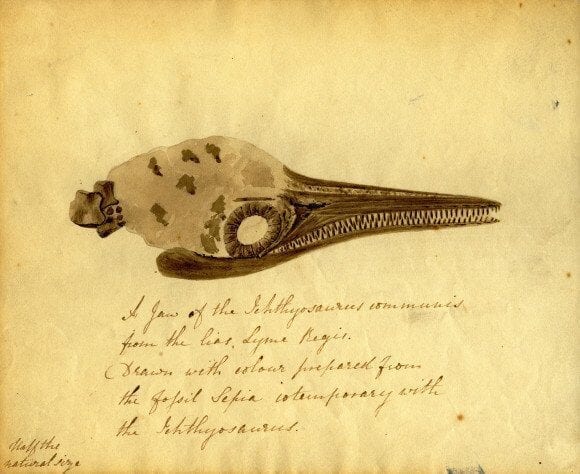 In 1826 Mary Anning discovered what appeared to be a chamber containing dried ink inside a fossil belemnite (an extinct cephalopod with many features in common with squid and cuttlefish). She showed it to her friend Elizabeth Philpot who was able to revive the ink with water, and use it to illustrate some of her own ichthyosaur fossils. In a letter to Mary, the wife of noted palaeontologist William Buckland, dated 9 December 1833, Elizabeth Philpot enclosed a sketch of an ichthyosaur head that she had painted using ink from the fossil squid of the alleged same age as the ichthyosaur; 200 million years old. This sketch and many others are held in the Oxford University of Natural History.[1]

Other local artists were soon doing the same when more fossilised squid ink chambers were discovered. Anning noted how closely the chambers resembled the ink sacs of modern squid and cuttlefish, which she had dissected to understand the anatomy of fossil cephalopods better.[2] 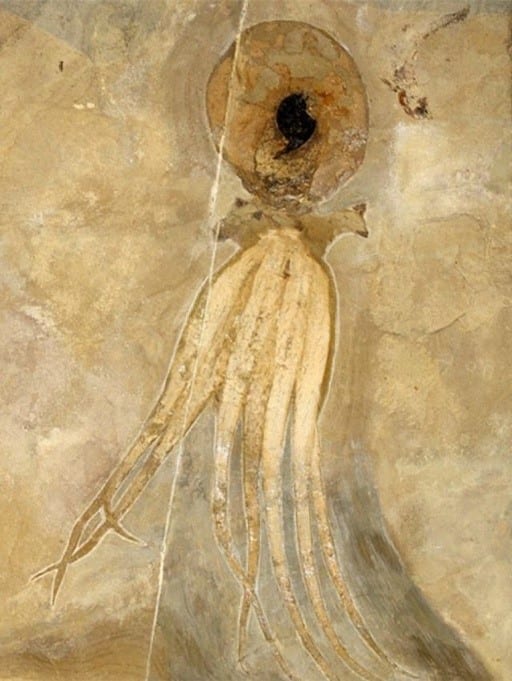 In December 2008, palaeontologist Dr Dirk Fuchs and co-workers, published their remarkable find in limestone deposits in Lebanon; the intact remains of an ancient octopus not only with its tentacles and suckers complete, but also its ink sack still full of ink as shown in the accompanying image.[3] Live Science commented on the discovery in its March 18, 2008 issue with Fuchs commenting on their unexpected find:

It’s hard enough to find fossils of hard things like dinosaur bones. Now scientists have found evidence of 95 million-year-old octopuses, among the rarest and unlikeliest of fossils, complete with ink and suckers.[4] 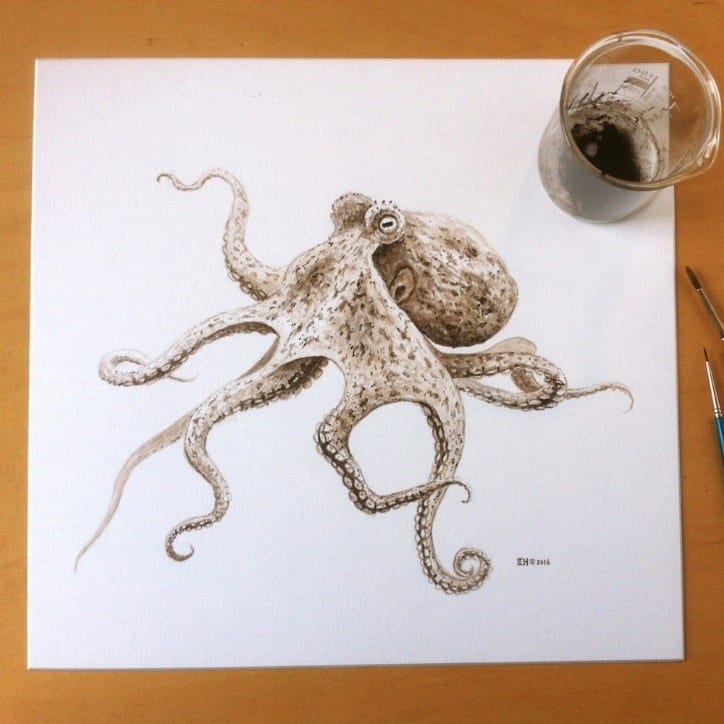 Talented Dutch wildlife artist Esther van Hulsen (her website is here) was given an assignment unlike her typical drawings of birds and mammals from life—a chance to draw a prehistoric octopus 95 million years after its death. Paleontologist Jørn Hurum supplied Hulsen with ink extracted from the fossil found in Lebanon in 2008, which was received as a gift from the PalVenn Museum in 2014. Hulson was surprised to find that the color had remained so vibrant, preserved all of this alleged time in the cephalopod’s ink sac. Knowing that this animal has used this ink to survive is absolutely amazing, said van Hulsen of the prehistoric ink.[5] Here drawing is shown with the octopus ink. 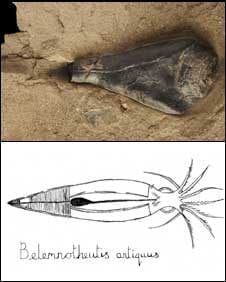 Palaeontologists have drawn with ink extracted from a preserved fossilised squid uncovered during a dig in Trowbridge, Wiltshire.

The fossil, thought to be 150 million years old, was found when a rock was cracked open, revealing the one-inch-long black ink sac.

A picture of the creature and its Latin name was drawn using its ink.

Dr Phil Wilby of the British Geological Survey said it was an ancient creature similar to the modern-day squid.

“The structure is similar to ink from a modern squid so we can write with it,” he said.

The top image is of the squid’s ink sack when the rock was split open. And the bottom image is a sketch of the squid using its own ink. Image credit: British Geological Survey.

How could complete octopuses remain in tact after so many tens of millions of years?

The discovery made by Dr Fuchs presented him with a dilemma as it does for other palaenotologists.  He expressed it this way:

The body of an octopus is composed almost entirely of muscle and skin. When an octopus dies, it quickly decays and liquefies into a slimy blob. After just a few days there will be nothing left at all. And that assumes that the fresh carcass is not consumed almost immediately by scavengers.[7]

Of course, what these people do not take into consideration is Noah’s flood, which happened only about 4,500 years ago. This provides the answer. Burial had to have been very rapid and would have happened by a series of tsunamis generated, as the earth’s crust broke open and fountains of the great deep ejected forth. These tsunamis would have carried mud, sand, silt, animals, vegtation and engulfed the land and buried everything before them. In fact, also preserved in the Labenon limestone were fish, birds, snakes, pterosaurs, dinosaurs, turtles, plants insects etc,[8] that is, both sea creatures and land based animals and vegetation all mixed in together. This is consistant with a flood of biblical proportions.

Several people who would know, have commented that the ancient ink is identical with that from a modern octopus.

Charles D. Derby of Georgia State University has written a thorough review of what is in the literature regarding  the ink used by coleoid cephalopods (squid, cuttlefish and octopus).[9] He provides the following information that the pigment melanin in its various forms are ubiquitus throughout the animal kingdom. Eumelanin is the form found in ink of cephalods. With regard to fossil octopuses, Derby comments:

Melanin in extant cephalopods appears to have changed little since the Jurassic period. Ink extracted from fossilized ink sacs of a Jurassic cephalopod, Belemnotheutis antiquus, was found to contain eumelanin with a chemical composition and structure highly similar to that of Sepia officinalis. In fact, this 160 million year old ink was so well preserved that it was used as sepia to make a drawing of the reconstructed squid shown above.

As well, chemical analysis of the ink has shown that it is identicle to modern octopuses and is undegraded.[10]

Eumelanin is part of a group of natural pigments collectively known as melanins. It is black/brown and the pigment in octopus ink. Like all organic compounds, it is subject to microbial degradation when in the natural environment. Eumelanin has been shown to be completely decomposed in 50 days by the mold Aspergillus fumigatus, when placed under ideal condition.[11] To claim that it has remain undecomposed for tens of millions of years when left is clearly wrong and it is only paying homage to the unquestionable god; evolution.

I once owned a medium size analytical chemistry laboratory. We provided a chemical analysis service to government, business and the public. In order to do this we had to hold pure reference samples. For example, if someone wanted to know the level of beta-Carotene in a sample of algea, we would isolate the carotene in the sample and determine its level against a reference sample. The reference samples were certified and had a use by date of only three years. They had to be kept in a freezer at -18º C because all organic compounds decompose.

Again we find archaeology either confirming or, as in this case, showing that Noah’s Flood is a more viable explanation of how octopuses became encased in limestone rock and preserved so well with tenticles, suckers and even their ink sacks all in tact, than the evolution story with its multiple tens of millions of years. In the case of the ink pouches, all that was needed was the addition of water and the ink could be used for writing and drawing.

These fossil octopuses showed that evolution had not taken place as they had not changed at all, even including the composition the ink pigment; eumelanin, which is identical to that in modern octopuses.