Assyria was at the height of its power during the eighth century and seventh century BC. When Sargon II (765-705 BC) died in battle in 705 BC, his son Sennacherib (740-681 BC) became king of the mighty Assyrian empire. He reigned for 24 years and dominated the middle east. Like all victorious kings (despots) of the time, Sennacherib wanted to boast about his conquests, so he had a clay prism made and copied it at least twice, telling the present and future generations of how great he is/was.

There are three complete and some fragments of these annals of Sennacherib. The complete ones are similar size prisms all inscribed with the same text containing six paragraphs of cuneiform written in Akkadian. The first to be discovered was the Taylor Prism. It was found in the ruins of the armoury in Nineveh the ancient capital of the Assyrian empire, where it would likely have been deposited. The artifact was acquired by the British Consul in Baghdad Colonel Robert Taylor (1790–1852), hence its name, in 1830 and subsequently purchased by the British Museum  from Colonel Taylor’s widow in 1855.[1]

The other two are; the Sennacherib Prism, which was purchased by James Henry Breasted from a Baghdad antiques dealer in 1919 for the Oriental Institute of Chicago USA. The third, the Jerusalem Prism, was acquired by the Israel Museum at a Sotheby’s auction in 1970. The dates on the prisms show that they were written sixteen months apart (the Taylor and Jerusalem Prisms in 691 BC and the Oriental Institute prism in 689 BC).[2] 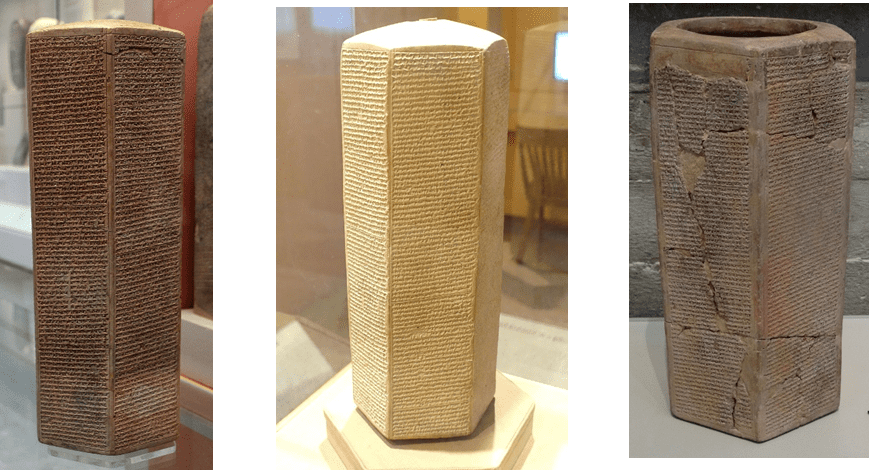 The significance of the prisms to scripture.

The prisms boast of king Sennacherib’s successful campaigns throughout Judah and Samaria. A translation of the Taylor Prism coincides with scripture. The relevant part states the following: 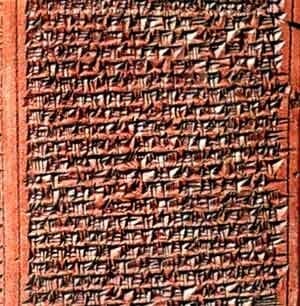 As for Hezekiah the Judahite, who did not submit to my yoke: forty-six of his strong, walled cities, as well as the small towns in their area, which were without number, by levelling with battering-rams and by bringing up siege-engines, and by attacking and storming on foot, by mines, tunnels, and breeches, I besieged and took them. 200,150 people, great and small, male and female, horses, mules, asses, camels, cattle and sheep without number, I brought away from them and counted as spoil. (Hezekiah) himself, like a caged bird I shut up in Jerusalem, his royal city. I threw up earthworks against him? the one coming out of the city-gate, I turned back to his misery. His cities, which I had despoiled, I cut off from his land, and to Mitinti, king of Ashdod, Padi, king of Ekron, and Silli-b?l, king of Gaza, I gave (them). And thus, I diminished his land. I added to the former tribute, and I laid upon him the surrender of their land and imposts? Gifts for my majesty. As for Hezekiah, the terrifying splendor of my majesty overcame him, and the Arabs and his mercenary troops which he had brought in to strengthen Jerusalem, his royal city, deserted him. In addition to the thirty talents of gold and eight hundred talents of silver, gems, antimony, jewels, large carnelians, ivory-inlaid couches, ivory-inlaid chairs, elephant hides, elephant tusks, ebony, boxwood, all kinds of valuable treasures, as well as his daughters, his harem, his male and female musicians, which he had brought after me to Nineveh, my royal city. To pay tribute and to accept servitude, he dispatched his messengers.[3]

The Taylor Prism confirms the following points mentioned in scripture:

The ancient Greek historian Herodotus, who wrote in about 450 BC in his book Histories, describe the operation being an Assyrian failure due to; a multitude of field-mice descending upon the Assyrian camp, devouring crucial material such as quivers and bowstrings, making the Assyrians unarmed and causing them to flee.[6] He does not appear to doubt that the incident happened, but rather to provide a non-spiritual reason for it. As well, Josephus records the incident stating; God had sent a pestilential distemper upon his army.[7] 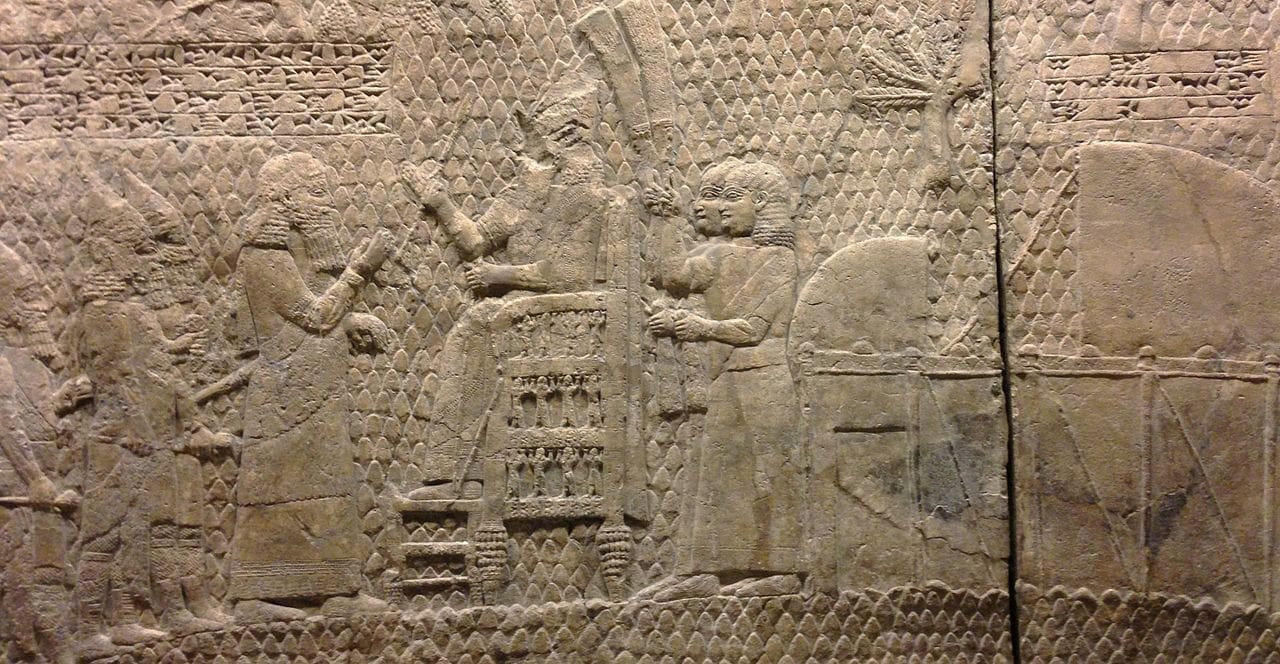 Sennacherib captured the Judahite city of Lachish in 701 BC. In order to preserve the event, he had some walls of his palace in Nineveh covered in what has become known as the Lachish Reliefs. Some of which are in the British Museum. The inscription on the one shown reads: Sennacherib, the mighty king, king of the country of Assyria, sitting on the throne of judgment, before the city of Lachish. I give permission for its slaughter.[8]

Imagine what art work Sennacherib would have had constructed if he had actually captured Jerusalem.

Scripture is continually being confirmed by archaeological discoveries. The writing on theTaylor and the other two prisms by an Assyrian king, runs parallel to that of scripture.

There is a significant spiritual message in this whole event. When king Hezekiah received the list of demands from Sennacherib’s officials, he goes into the temple and lay these demands before their God, Jehovah and plead for His protection.[10] In the morning 185,000 Assyrian soldiers lay dead and Sennacherib retreats to Nineveh.

Later, when he was back in Nineveh, and while he was praying to his god, Sennacherib is murdered by two of his sons. Whose God is the real God? Hezekiah’s or Sennacherib’s?

[3] Rusty Russell, Bible History Online; https://www.bible-history.com/empires/prism.html. The translation is taken from: Daniel D. Luckenbill, Ancient Records of Assyria and Babylonia, vol. 2, and in James Pritchard’s Ancient Near Eastern Texts (1950).[4] Sennacherib, the great king, the mighty king, king of the world, king of Assyria, king of the four quarters, the wise shepherd, favorite of the great gods, guardian of right, lover of justice, who lends support, who comes to the aid of the destitute, who performs pious acts, perfect hero, mighty man, first among all princes, the powerful one who consumes the insubmissive, who strikes the wicked with the thunderbolt;