The apostle Paul, stayed in Corinth for a year and a half teaching about the Lord Jesus. His practice would be to go into the synagogue and preach. Although the synagogue ruler Sosthenes believed, many of the Jews did not and they brought Paul before the Roman proconsul Gallio as stated in Acts 18:12-13;

While Gallio was proconsul of Achaia, the Jews made a united attack on Paul and brought him into court. “This man,” they charged, “is persuading the people to worship God in ways contrary to the law.”

Gallio dismissed the charges because they were to do with their own law and not Roman law. But who was Gallio and when did this happen?

In 27 BC, Achaia became a senatorial province governed by a proconsul. Its territory comprised southern Greece with Corinth and Athens as its main cities. Because of poor administration, it reverted to imperial status in AD 15 but was restored to senatorial control in AD 44 by Claudius. Junius Gallio Annaeanus’ duties as proconsul began in June of AD 51.[1] He was the son of Marcus Annaeus Seneca, who was the brother of the famous philosopher Lucius Annaeus Seneca. The latter spoke highly of Gallio; No mortal is so pleasant to any one person as Gallio is to everybody.[2] Lucius Seneca became the tutor of the future emperor Nero who when he became emperor, ordered Seneca to commit suicide which he obediently did following the tradition set by Socrates, he even used hemlock.[3] 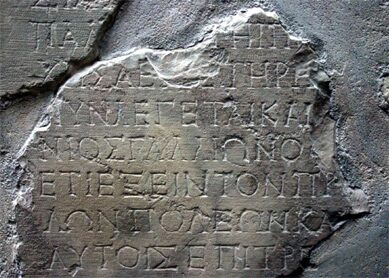 The existence of Gallio and his position is confirmed by an archaeological discovery made at Delphi in 1908. It consisted of nine stone fragments, one is shown. They came about by the discovery of four fragments, then later three more and finally two more. Initially there was some uncertainty as to whether the fragments comprised the one inscription; all scholars agree now that they do.

In the inscription, Claudius ordered the proconsul Gallio to use incentives to persuade people to move to Delphi because it was becoming de-populated. But importantly for Bible scholars, the text states that Claudius is named as imperator for the twenty sixth time, thereby dating it to late April to early May AD 52.[4]

Another piece of evidence that supports this date is that Paul met Aquila and Priscilla when he arrived in Corinth. They were Jews and had only recently been expelled from Rome as Claudius expelled all Jews from Rome in AD 50.[5]

The Gallio Inscription is an important artifact which not only confirms that Gallio was the prefect of Achaia based in Corinth at the time of Paul, as Luke records in the book of Acts, but also, the inscription is a precise chronological anchor for the book of Acts which places Paul in Corinth in AD 52 and helps to determine a timeline for Paul and his travels. Again, the Gallio inscription bears witness to Luke’s meticulous recording of the events that took place during Paul’s travels. I have written about Luke’s accurate recordings previously.