In on July 5, 2007, Dr Michael Jursa, a visiting professor from the University of Vienna, made a startling discovery as he searched the British Museum’s vast collection of Babylonian clay tablets which numbered approximately 130,000. He was looking for the names of Babylonian officials when he came across a name that looked familiar; Nebo-Sarsekim, the chief eunuch in the court of King Nebuchadnezzar. The tablet was so well preserved that it took him only minutes to decipher. It was a mundane receipt acknowledging Nebo-Sarsekim’s payment of 0.75 kg (1.7 lb) of gold to a temple in Babylon.[1] This same name and title are recorded in Jeremiah 39:3:

The above verse was taken from the 1985 NIV, the KJV, ESV, NASV and many other Bible versions have the following or similar:

The words, Samgarnebo, Rabsaris (Chief Eunuch) and Rabmag are simply titles which the NIV had translated. 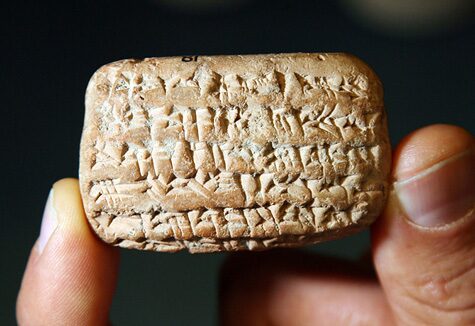 The name Nebo-Sarsekim was clearly inscribed on a well-preserved tablet measuring just 5.5 cm (2.13 inches) wide. It was found in Sippar, an ancient Babylonian city 32 Km (20 miles) southwest of modern Bagdad and 60 km (35 miles) north of Babylon. It was recovered in the late nineteenth century along with thousands of other cuneiform tablets from the site and taken to the British Museum.

At first, I was just pleased to have found a reference to the title ‘Chief Eunuch,’ as these officials are mentioned very rarely in the sources. Then it suddenly came to me that this text was very close chronologically to an episode narrated in Jeremiah 39 in which Nebo-Sarsekim is mentioned, and that I might actually have found the very man. So then I got quite excited and instantly went and checked (and double-checked) the exact spelling of the name in the Hebrew Bible and saw that it matched what I had found in the Babylonian text!

The tablet is dated 595 B.C., the ninth year of Nebuchadnezzar II’s reign. The Book of Jeremiah relates that after Nebuchadnezzar took Jerusalem in 587 B.C., he committed the prophet Jeremiah to Nebo-Sarsekim’s care.

It is so incredibly rare to find people appearing in the Bible, who are not kings, mentioned elsewhere. Something like this tablet, where we see a person mentioned in the Bible making an everyday payment to the temple in Babylon and quoting the exact date, is quite extraordinary.[3]

The discovery was reported by Nigel Reynolds in The Telegraph (July 11, 2007) with the follow opening: The sound of unbridled joy seldom breaks the quiet of the British Museum’s great Arched Room, which holds its collection on 130,000 Assyrian (Babylonian?) cuneiform tablets, dating back 5,000 years.

The Assistant Keeper in the Department of the Middle East at the British Museum, Irving Finkel, had commented on the discovery:

This is a fantastic discovery, a world-class find. If Nebo-Sarsekim existed, which other lesser figures in the Old testament existed? A throwaway detail in the Old Testament turns out to be accurate and true. I think it means that the whole of the narrative [of Jeremiah] takes on a new kind of power.[4]

Not only did this Babylonian clay tablet state the name of an official mentioned in Jeremiah, but it gives his title and the correct period of time; all completely consistent with Jeremiah’s book. It adds to the growing and now considerable body of archaeological evidence which supports the people, places and events mentioned in the Bible.