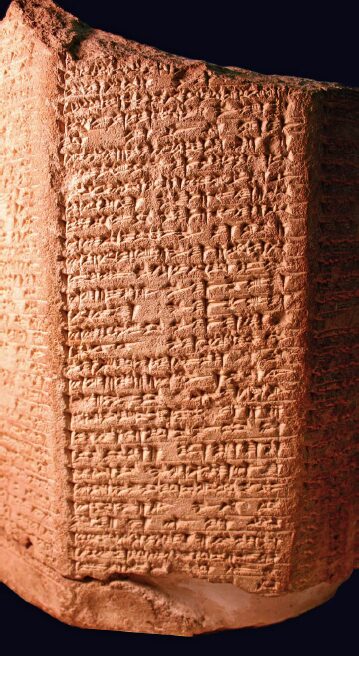 An archaeology discovery known as the Nebuchadnezzar II prism, referred to in the literature as the Hofkalender. Originally, it had eight columns (or sides), but only six pieces are preserved. These are designated Columns I to VI. Column VI has the designation EK 7834, and is in the Istanbul Archaeological Museum. It contains an unusual royal inscription, which refers to the building works to enlarge the Old Palace at Babylon. But also, it contains long lists of provincial and imperial officials. In 1982, William Shay found Shadrach, Meshach, and Abednego names on this list of officials of Nebuchadnezzar.[2] Column VI is pictured.

In his thorough and detailed analysis of EK7834, Rocio Da Riva[5] notes the names of two Babylonian officials who are recorded in the Bible as shown; Nergal-sharrezar and Nebuzaradan. As well, Da Riva reads the date the inscribed on the prism as to when it was completed as being 598 BC, which places the people it records in the same period as the events recorded in the Bible.

It is inconceivable that some people could believe that the Jews made up the Old Testament narrative to explain their exile in Babylon. The identification of biblical figures, with the same titles and correct time frame have been found on Babylonian tablets. This is not only strong evidence for the integrity of the Bible, it is proof of the accuracy and eyewitness nature of the biblical record.

Acknowledgement: I am indebted to Shelley Houser for supplying most of the information in this article. Her work can be found  here.