As the gospel spread through Jerusalem, all Judea, Samaria and to the ends of the earth, it was followed by false teaching. The New Testament writers constantly warned new believers not be to led astray by false teaching.

In AD 178, the Greek philosopher Celsus attacked the major doctrines of Christianity in his work, On the True Doctrine particularly the virgin birth and the resurrection of Christ.[2]

The disciples had to confront the false teaching of the Judaizers in Galatia and from the Council of Jerusalem (Acts 15), they laid out firm doctrine stating that salvation included the Gentiles and that circumcision was not necessary for salvation.

Clearly, as the gospel was being spread from Antioch which had replaced Jerusalem as the centre of Christianity, it was being corrupted as we have seen. A statement of faith needed to be formulated and we can see glimpses of this happening in the New Testament for example, 2 Timothy 3:16-17

All scripture is God-breathed and is useful for teaching, rebuking, correcting and training in righteousness, so that the man of God may be thoroughly equipped for every good work.

Possibly one of the first creeds[3], is that which Paul quotes in 1 Corinthians 15:3-7:

There seems little doubt that the first “official” creed was the Apostles’ Creed. It first appeared in a letter sent by the synod of Milan in AD 390 to Pope Siricius and probably drafted by St Ambrose as he was one of the letter’s signatories.[4] In 404, Tyrannius Rufinus wrote in the exposition of the creed: 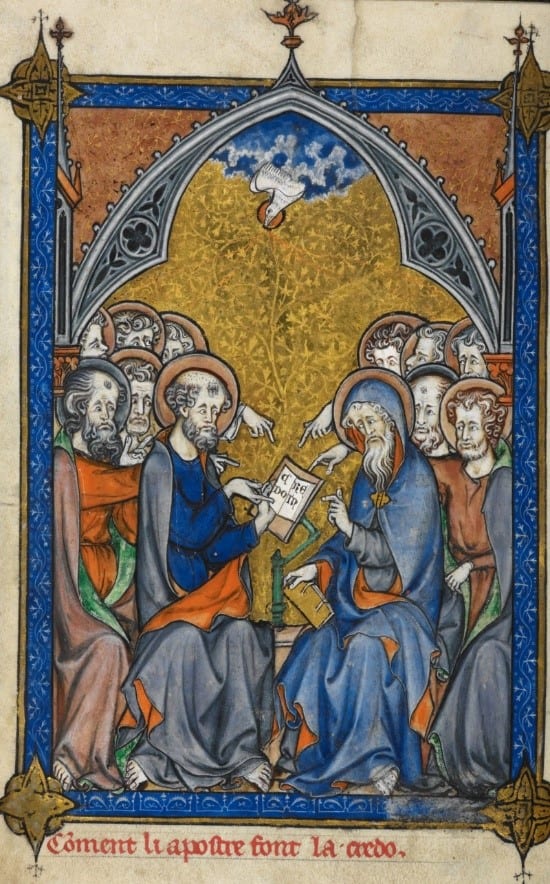 As they (the apostles) were therefore on the point of taking leave of each other, they first settled an agreed norm for their future preaching, so that they might not find themselves, widely separated as they would be, giving out different doctrines to the people they invited to believe in Christ. So, they met together in one spot, and being filled with the Holy Spirit, compile this brief token, as I have said of their future preaching, each making the contribution he thought fit; and they decreed that it should be handed out as standard teaching to believers.[5]

He contended that each of the twelve apostles added a line to the creed. He quotes the late fourth century document, Explanatio symboli ad initiandos[6] as his source.[7] This story had universal acceptance right through the middle ages. It was not until the Council of Florence of 1438-45 that its genesis was seriously questioned. Even so, the essence of the Apostles’ Creed is ultimately traceable to the teaching of the apostles through their books and letters.

The illustration is from a 13th-century manuscript which shows the apostles writing the Creed, as they receive inspiration from the Holy Spirit. Credit: Wikipedia commons.

The Apostles’ Creed is used in the Roman Catholic, Anglican and many protestant churches today. A common form of it is below.

I believe in God, the Father almighty,
creator of heaven and earth.

I believe in Jesus Christ, his only Son, our Lord.
He was conceived by the power of the Holy Spirit
and born of the Virgin Mary.
He suffered under Pontius Pilate,
was crucified, died, and was buried.
He descended to the dead.
On the third day he rose again.
He ascended into heaven,
and is seated at the right hand of the Father.
He will come again to judge the living and the dead.

I believe in the Holy Spirit,
the holy catholic Church*,
the communion of saints,
the forgiveness of sins,
the resurrection of the body,
and the life everlasting. Amen. 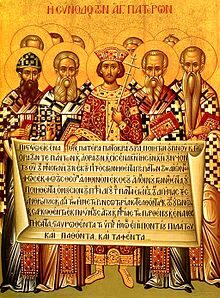 This creed was adopted at the Council of Nicaea which opened on June 19, 325. It was specifically formulated to counter the Arian proposition,[8] which explicitly affirms the co-essential divinity of the Son, applying to him the term “consubstantial”. The 381 version speaks of the Holy Spirit as worshipped and glorified with the Father and the Son. The Apostles’ Creed does not explicitly affirm the divinity of the Son and the Holy Spirit, but in the view of many who use it, this doctrine is implicit in it. Also, this gives support to the fact that the Apostles’ Creed was in existence well before 325 and supports the Zondervan Illustrated Bible Dictionary (page 318) which states that it probably originated in the middle of the second century.

The Nicene Creed can be found here.

The image depicts the Emperor Constantine, accompanied by the bishops of the First Council of Nicaea (325), holding the Niceno-Constantinopolitan Creed of 381. Credit: Wikimedia commons.

The Apostles’ Creed summarises the essential teaching of the Bible in a simple way and new believers do not have to read the whole Bible to obtain its essential doctrines.

Augustine of Hippo (AD 354-430), stated in a comment on the value of creeds: These words you have heard are in the Divine Scriptures scattered up and down; but thence, gathered and reduced into one, that the memory of slow persons might not be distressed; that every person may be able to say, able to hold what he believes.

The great advantage of a creed is that it is a clear statement of belief that can be committed to memory. It can be recited in an instant and a heresy can be compared with it on the spot. This was of great value in the early Christian era when the ability to read was uncommon,

These creeds show that there has been a seamless flow of solid doctrine from the apostles right through church history to the present. Nothing new has been added and nothing has been deleted. When it was realised that something was missing from the Apostles’ Creed, in the form of explicit divinity of both the Son and Holy Spirit, it was added and produced in the form of the Nicene Creed.

Both creeds do not mention salvation by faith. This doctrine is so strong throughout the New Testament that it is clear from even a casual reading. And that this is the basis of the judgement mentioned in the creeds.

Unfortunately, the Roman Catholic church added to this bedrock of doctrine by including church hierarchy and the position of the pope. priest celibacy, purgatory, the worship of Mother Mary, the confession of sins to a priest and his ability to forgive them.

[1] The Nicolaitans were a heretical sect with in the church that had worked out a compromise with the pagan society. They apparently taught that spiritual liberty gave them sufficient leeway to practice idolatry and immorality (NIV text note). [2] https://en.wikipedia.org/wiki/The_True_Word. [3] A formal statement of Christian beliefs. [4] J N D Kelly, Early Christian Creeds, Third Edition, Continuum International Publishing Company, published 1950, reprinted 2011, page 1. [5] Ibid page 1-2, citing; Comm. [6] Various translations are available today in book form. [7] J N D Kelly, page 2. [8] The Arian concept of Christ is based on the belief that the Son of God did not always exist but was begotten within time by God the Father, therefore Jesus was not co-eternal with God the Father.