Previous Post
Evolution, A Scientific Fact Or an Aggressive Religion
Next Post
Monasteries, their value in preserving scripture

Anything that exhibits design must have a designer. This is pure logic. 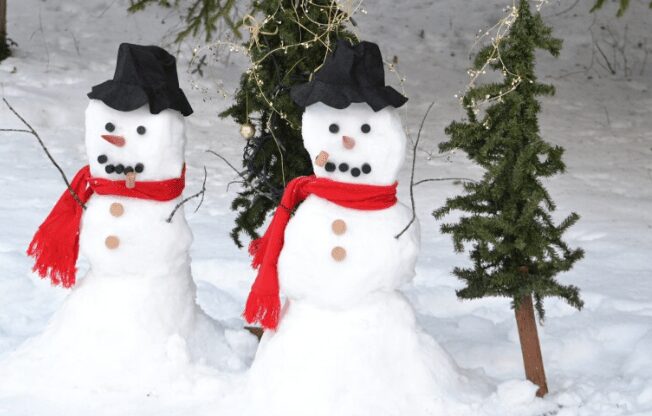 Due to excessive snowfall a few years ago, I found myself in that ‘fortunate’ position, unable to get into work, and decided to spend my time wisely exploring design theory by building two snowmen. Just as I had finished lifting the head onto the second snowman, and had added the obligatory items to construct a facial representation, I was joined by the next-door neighbour’s child. Taking my opportunity to conduct this rather fun piece of research I asked him if he thought that the snowmen could have appeared by chance, all by themselves? He replied, “No, someone had to make them.” For this 10-year-old boy it was obvious; of course, the snowmen could not have appeared all by themselves. The design of the snowmen was glaringly obvious to him. He implicitly recognised that there was a specific way in which the snowmen had been put together and shaped, a specified complexity to it, that there had been a designer and creator.

Examples of design in biology

In our diagram given below, we know that the Ferrari has been painstakingly designed to be able to perform all the functions the company required. Yet, it pales in comparison to the equipment contained in the running man. As well, the man can repair himself automatically from most damage; broken bones, skin lacerations, bacterial and viral attacks etc. Any damage to the Ferrari’s body will remain with it, unless it is repaired by someone. The man in conjunction with a woman, hopefully his wife, have the ability to reproduce themselves. The Ferrari certainly cannot. So, far more design work has gone into the man than into the car. It is ridiculous to think that the car produced itself, but that is what evolutionists claim for the man. 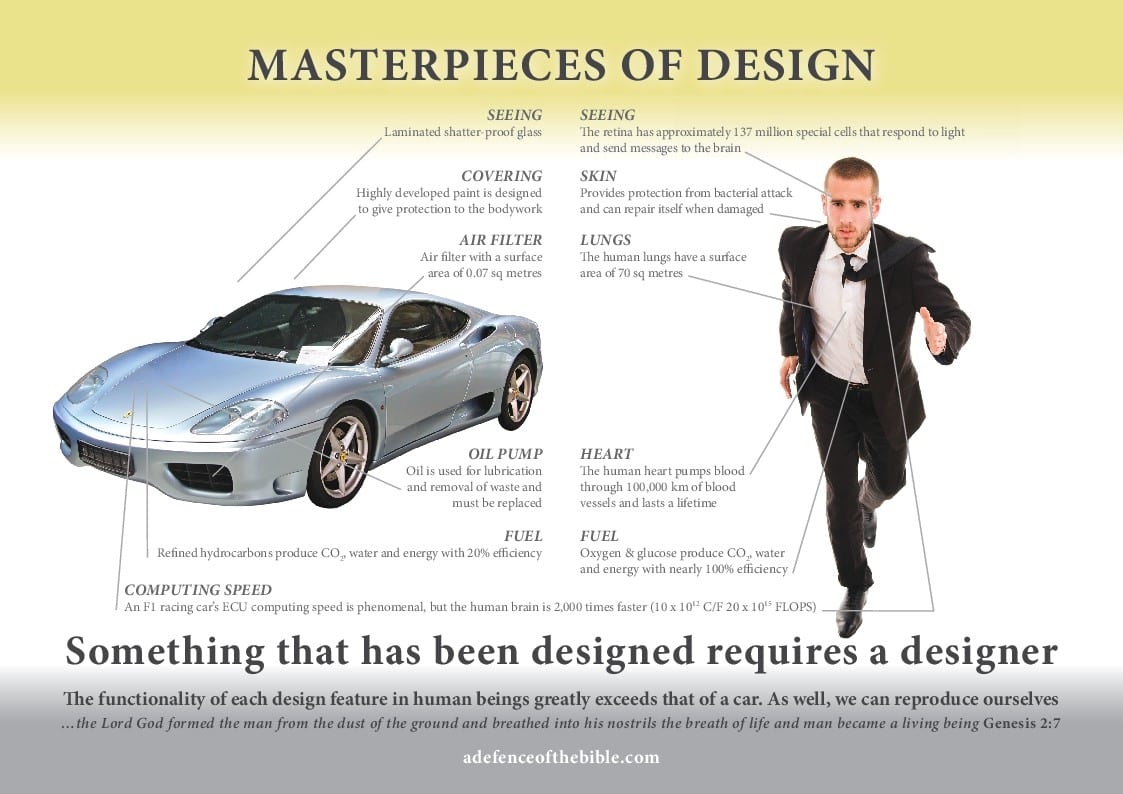 I created this poster for anyone to use. It can be enlarged for easier reading and is also available to download and have printed or to simply print as it is. Go to https://www.adefenceofthebible.com/2016/05/26/masterpieces-of-design. 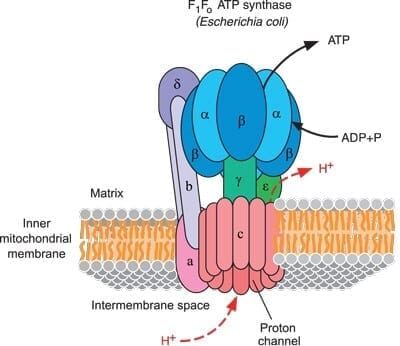 Modern science has revealed the incomprehensible complexity of all life. Design is evident everywhere. There are literally thousands of examples, one is a micro structure called ATP Synthase, a biological motor which is similar to an electric motor; only an electric motor runs on moving negatively charged electrons, whereas ATP Synthase runs on moving positively charged protons. As the diagram, courtesy of Creation Ministries; creation.com, shows.

For every turn of the “spindle” Y, three molecules of ADP (Adenosine Diphosphate) plus phosphate (P) are converted into three molecules of ATP Adenosine Triphosphate). This nano motor spins at between 7,000 and 9,000 revolutions per minute and operates with close to 100% efficiency, churning out half of our body weight in ATP per day; staggering! The ATP generated is a source of energy and is used quickly. There are thousands of trillions of these motors operating in every person. I have written about ATP Synthase, here https://www.adefenceofthebible.com/2019/11/24/gods-amazing-creation.

On a macro scale; we breath in oxygen, our red blood cells take the oxygen to other cells where it is combined with glucose derived from the food we eat, to produce carbon dioxide, water and energy. The carbon dioxide attaches to the red blood cells and taken to the lungs where it is replaced by another molecule of oxygen and the process is repeated. Vegetation, on the other hand, takes in carbon dioxide and combines it with water and through the action of photosynthesis produces glucose and oxygen. The glucose forms part of the plant structure and is the source of glucose that humans and animals ingest and the oxygen released, is available for metabolism by all airbreathing life. Design is clear in this symbiotic process. 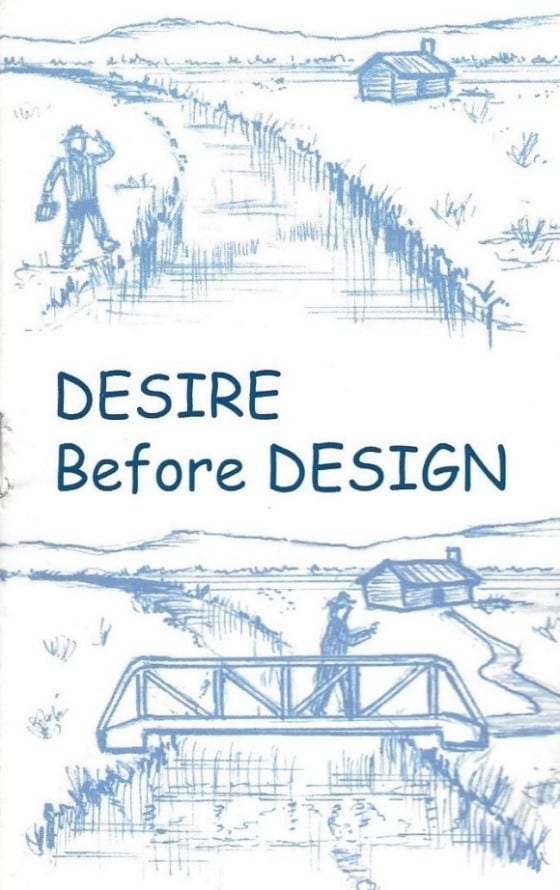 For anything that has been constructed, made, created or functions in some way, design is evident. This does not come out of a vacuum, it had to have been initiated by a desire. This little sketch which is the cover of a booklet made by a friend, Murray F Graham, who has now passed on to glory, clearly demonstrates this concept.

The idea that desire-initiated design, which then manifested into creation, is exemplified by scripture. The fact that God created everything is attested in Genesis chapter 1 and John 1:1-3 and as the sketch shows, design is prerequisite for creation. God’s desire to create is mentioned as well;

You are worthy our Lord and God, to receive glory and honor and power, for you created all things, and by your will they were created and have their being.[3]

All life is incomprehensively complex.  From a heart pumping nutrient rich blood throughout a body, to a brain controlling all functions right down to the intricate workings of a cell. The evidence of design through all of it is inescapable. All of which points to creation by a Supernatural Being, the One who has revealed Himself to us through the pages of the Bible.

For since the creation of the world God’s invisible qualities—his external power and divine nature—have been clearly seen, being understood from what has been made, so men are without excuse.[4]

The fool in his heart, says there is no God.