Evolution, A Scientific Fact Or an Aggressive Religion 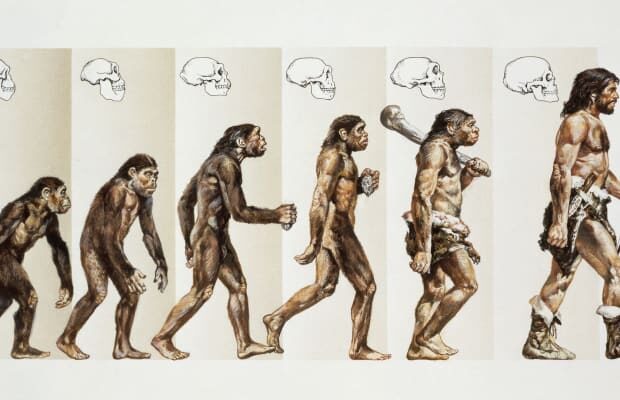 I have written before regarding the Darwinian Deception,[1] which promotes the idea that Darwinian evolution is about monkeys evolving into men as shown below.[2] This is presented because it is easy to believe. But it is not what Darwin proposed.

What Darwin proposed and what has become known as Darwinian Evolution is that a microscopically small single cell species evolved into all forms of life including humans. The diagram below shows this more accurately and it includes Darwin’s actual quotation. 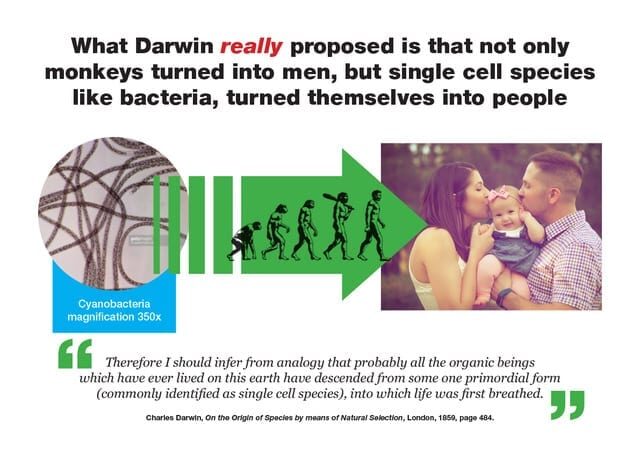 If this really happened, then there must have been millions of life-forms which transitioned from the original single cell species to humans. The fossil record would have to be overwhelmed by them. But palaeontologists are hard pressed to find even one.

The absence of fossil evidence for intermediary stages between major transitions in organic design, indeed our inability, even in our imagination, to construct functional intermediates in many cases, has been a persistent and nagging problem for gradualistic accounts of evolution.[3]

The extreme rarity of transitional forms in the fossil record persists as the trade secret of paleontology. The evolutionary trees that adorn our textbooks have data only at the tips and nodes of their branches … in any local area, a species does not arise gradually by the gradual transformation of its ancestors; it appears all at once and fully formed.[4]

Dr Colin Patterson, head of the British Museum, makes the following point in response to a question regarding the lack of transitional species in his book, Evolution:
I wrote the text of my book four years ago. If I were to write it now, I think the book would be rather different. Gradualism is a concept I believe in, not just because of Darwin’s authority, but because my understanding of genetics seems to demand it. Yet, Gould and the American Museum people are hard to contradict when they say there are no transitional fossils. As a palaeontologist myself, I am much occupied with the philosophical problems of identifying ancestral forms in the fossil record. You say that I should at least show a photo of the fossil from which each type of organism was derived. I will lay it on the line; there is not one such fossil for which one could make a watertight argument.[5]

It is not even possible to make a caricature of evolution out of palaeobiological facts. The fossil material is now so complete that the lack of transitional species cannot be explained by the scarcity of the material. The deficiencies are real; they will never be filled.[7]

Dr Colin Patterson sums up the status of the religion of evolution with this extract taken from his public lecture presented at New York City’s American Museum of Natural History on 5 November 1981: … One morning I woke up … and it struck me that I had been working on this stuff [evolution] for twenty years, and there was not one thing I knew about it. He added: That was quite a shock that one could be misled for so long … I’ve tried putting a simple question to various people and groups of people: “Can you tell me anything you know about evolution, any one thing that you think is true?” I tried that question on the geology staff in the Field Museum of Natural History, and the only answer I got was silence. I tried it on the members of the Evolutionary Morphology Seminar in the University of Chicago … and all I got there was silence for a long time, and then eventually one person said: “Yes, I do know one thing. It ought not to be taught in high school.[8]

The hypothesis of evolution either stands or falls on the fact that there have been transitional species. The conclusion; it falls, as there are no transitional species in the fossil record. Even worse, the evolutionists quoted above, say they cannot even imagine what a transitional species would look like. Bearing in mind that each life-form in the process has to be more adaptable than its ancestor. This must be true with the change of a reptile’s legs into a bird’s wings for example. So that a creature in the process of legs changing into wings must be more efficient at living and procreating than the creature immediately before it. No wonder people cannot even imagine what such creatures would look like. The whole idea is ludicrous and the only reason as to why it has not been discarded along with say, the philosopher’s stone which was thought to be able to turn base metals into gold, is because it attempts to be able to explain our existence without God. 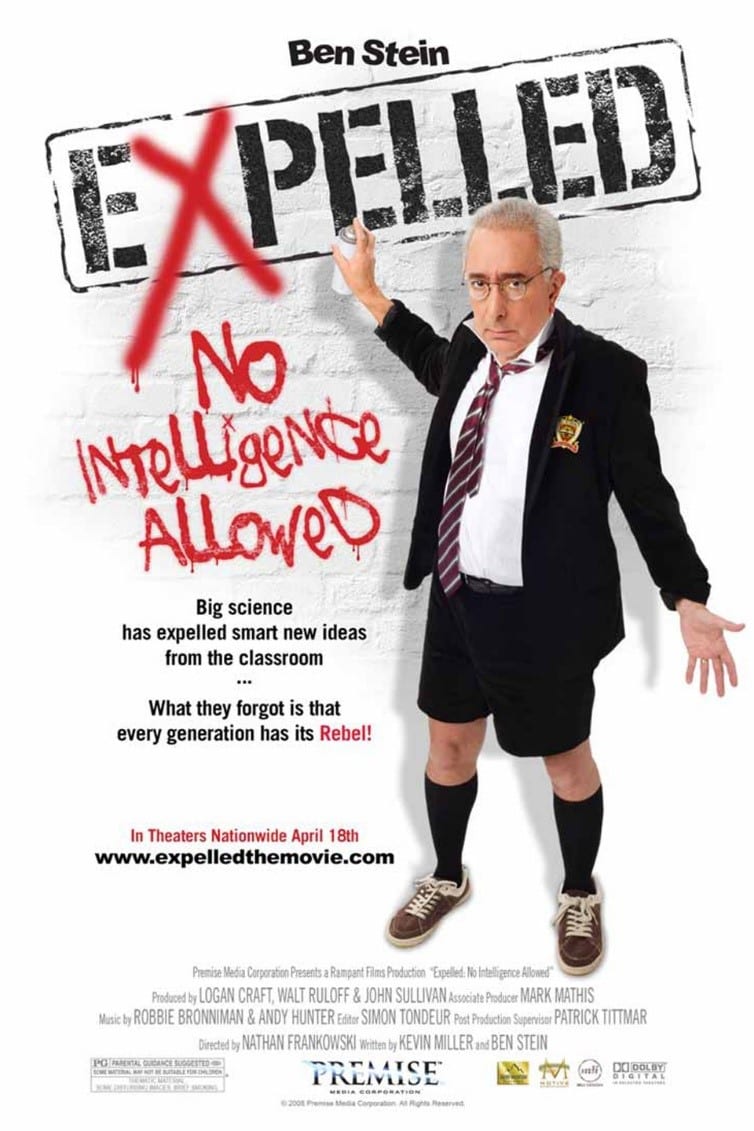 Evolution is forced on students at secondary schools and universities. They are told that it is science and it is fact. Creation by a supernatural being is never considered as it is religion and places of higher learning only deal with scientifically established realities is what they say. Although an unbiased scientific inquiry would lead to creation.

Ben Stein’s film, Expelled, No Intelligence Allowed, exposes the fear of evolutionists in allowing free speech in scientific inquiry. Stein discovers an elitist scientific establishment that has exchanged science’s supposed quest for open-minded inquiry for harsh dogmatism. Freedom, the essence of America, says Stein (a former civil rights lawyer), is easily taken away at universities, with qualified scientists expelled for not embracing evolution.

The reason why evolution is an aggressive religion is because it cannot be defended scientifically, so adherents must protect it from being examined in every way they can. This takes the form of expelling anyone who does not believe it.