The last Babylonian king, before the conquest by the Medes and Persians in 539 BC, was Nabonidus according to Greek historian Herodotus. As well, Nabonidus comes last in the list of Babylonian kings of Berossus and Ptolemy.

Although details differ, the general consensus of the ancient historians is as follows:

The consensus of ancient historians is that Nabonidus (556-539 BC) was the last king of Babylon.[1]

However, according to Daniel, Belshazzar was the king in Babylon when it fell, and he was killed that night, Daniel 5:1 states:

King Belshazzar gave a great banquet for a thousand of his nobles and drank wine with them.

5:30: That very night Belshazzar, king of the Babylonians, was slain, and Darius the Mede took over the kingdom at the age of sixty-two.

Bible sceptics loved Belshazzar — he obviously didn’t exist they said.  In 1850, Ferdinand Hitzig (Das Buch Daniel) called Belshazzar “a figment of the writer’s imagination.” The historians all agreed; the last king was Nabonidus, not Belshazzar.  He was captured, not killed.  Daniel was obviously all wrong. It was written centuries later and totally inaccurate.[2]

Daniel’s account of Belshazzar was powerful evidence that sounded the death knell for the Bible’s credibility.  What more could a sceptic want?

And why did this mythical Belshazzar offer Daniel only the third highest place in his kingdom and not the second after himself?

If you can read this writing and tell me what it means, you will be clothed in purple and have a gold chain placed around your neck, and you will be made the third highest ruler in the kingdom. (Daniel 5:16) 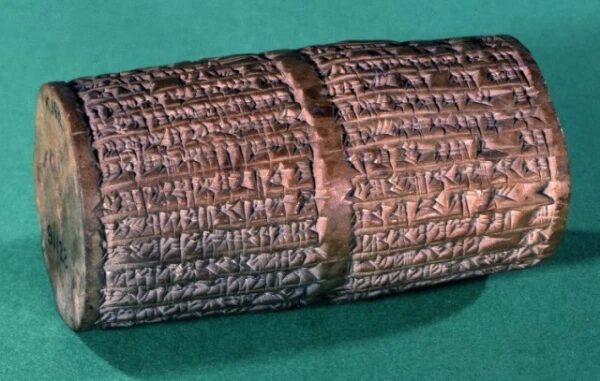 The Nabonidus Cylinder, British Museum reference number, WA 91128, is possibly the most significant archaeological discovery ever made; certainly, as far as Christians are concerned. It proves that the ancient historians were wrong and that the Bible is entirely correct.

In 1854, as J E Taylor, the British archaeologist, inspected the basement of the ancient ruins of a ziggurat at the biblical city of Ur, he found four clay fired cuneiform cylinders written by the Babylonian king Nabonidus. One of the four cylinders, documented the history of the ziggurat and to various renovations to buildings. Toward the end of the inspection, Nabonidus offers a prayer to his god, the Moon god Sin, for long life for himself and his son Belshazzar with the words:[3]

As for me, Nabonidus, king of Babylon, save me from sinning against your great godhead and grant me as a present a lifelong of days, and as for Belshazzar, the eldest son – my offspring – instil reverence for your great godhead in his heart and may he not commit any cultic mistake, may he sated with a life of plenitude.[4]

Even though the Bible refers to Belshazzar’s father as being Nebuchadnezzar, the word for father also means ancestor or predecessor.[6]

So, this one cylinder showed that the biblical sceptics were wrong (once again) and the Bible was true. It proved that Belshazzar did once exist and implied that he was a Babylonian king and in fact, the son of Nabonidus. 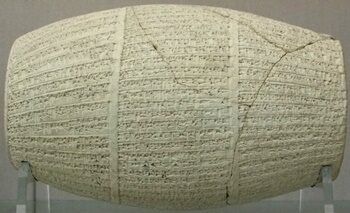 Excavations at the temple of Shamash in Sippar (southern Iraq) led by Hormuzd Rassan (1826-1910) recovered a mid-sixth century BC cylinder that describes Nabonidus’ reconstruction of pagan temples in Harran. It proceeds to state that he (Nabonidus) was away from Babylon on various expeditions and temple reconstructions projects. This ten-year departure from Babylon provides the reason as to why he left his son Belshazzar king and co-regent during his absence.[7] And it explains why Belshazzar could offer Daniel only third highest ruler of the land.

As a side issue, Nabonidus refers to Cyrus as king of Ansan:

At the beginning of the third year, they arouse him, Cyrus, the king of Ansan, his second in rank. He scattered the vast Median hordes with his small army.

About 175 years earlier, Isaiah (44:28; 45) prophesised about this same man, Cyrus who would be used by God to fulfill His purposes. 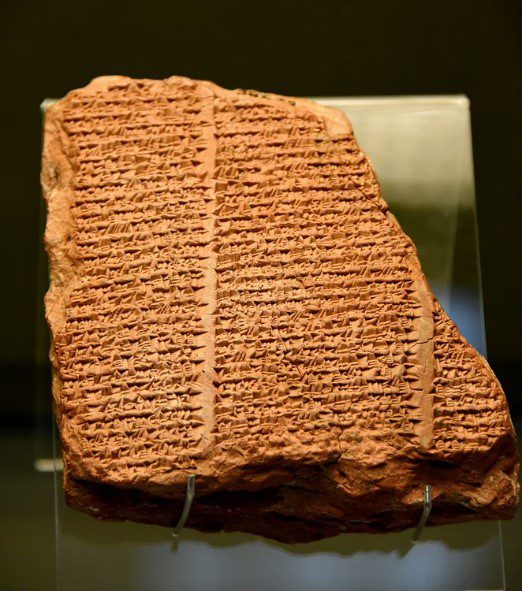 The Nabonidus Cylinder found at Sippar, above, told of the things that Nabonidus did while he was away from Babylon, but the Verse Accounts of Nabonidus (British Museum number 38229, pictured), state clearly, that he appointed his son Belshazzar, king and co-regent during his absence.

Column II line 18 of the tablet, States: The king entrusted the royal power to his son Bēl-šaru-uṣur (Belshazzar). His son Belshazzar is mentioned in lines 5, 10, 19 and 23.[8] 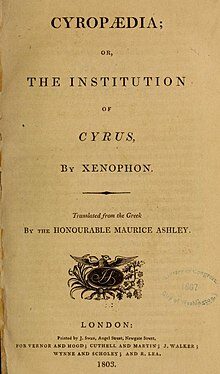 Further support for the Bible’s claim that Belshazzar was king of Babylon when the city fell to the Medes and the Persians comes from a Greek historian by the name of Xenophon. He was an Athenian-born military leader, philosopher, and historian. At the age of 30, Xenophon was elected a commander of one of the biggest Greek mercenary armies, the Ten Thousand, that marched on and came close to capturing Babylon in 401 BC. [9]

In his Cyropaedia (pictured), Encyclopaedia Britannia state that Xenophon named Belshazzar as king of Babylon when the city fell to Cyrus the Great.[10]

The evidence is overwhelming; Belshazzar was king and co-regent with his father Nabonidus when Babylon fell to the Medes and Persians. The Bible stands to be true and correct while ancient historians were wrong.

As someone stated: Who would have guessed a prayer to a false god would end up glorifying the one true God?