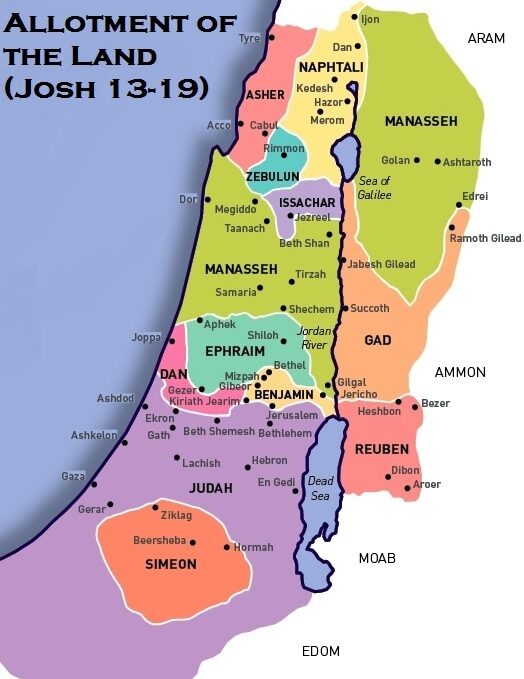 Each of the twelve sons of Jacob were given an allotment of land in Canaan, except for Levi whose tribe became the priestly line and did not receive land (Joshua 13:14). Jacob adopted Joseph’s two eldest sons, Manasseh and Ephraim in place of Joseph, (Genesis 48:5) thereby giving rise to the twelve tribes and twelve allotments of land as shown (image credit: Biblical Hermeneutics Stack Exchange).

Before the Israelites crossed the Jordan to take possession of the land, Joshua divided it so to give each tribe a portion. He further divided each tribe’s portion into clans. Here, we will concentrate on the half tribe of Manasseh on the west of the Jordan only, which received ten tracts of land, one for each of Gilead’s five sons and one each for Zelophehad’s five daughters (Joshua 17:5). Joshua 17:1-3 provides the details of the clans who received land:

1This was the allotment for the tribe of Manasseh as Joseph’s firstborn, that is, for Makir, Manasseh’s firstborn. Makir was the ancestor of the Gileadites, who had received Gilead and Bashan because the Makirites were great soldiers. 2So this allotment was for the rest of the people of Manasseh—the clans of Abiezer, Helek, Asriel, Shechem, Hepher and Shemida. These are the other male descendants of Manasseh son of Joseph by their clans.

Since only sons could inherit land, initially, it looked as if Zelophehad would miss out because he had only daughters. The daughters brought their case to Eleazar the priest and Joshua the son of Nun ruled in their favour and each daughter received a portion of land (Joshua 17:4, Numbers 26:33; 27:1; 36:11), thereby making the ten allotments.

So as the land of the Canaanites was captured, the ten clans that took possession of Manasseh’s portion on the west of the Jordan were: Abiezer, Helek, Asriel, Shechem, Shemida, Mahlah, Noah, Hoglah, Milkah and Tirzah.

Archaeological confirmation of these clans 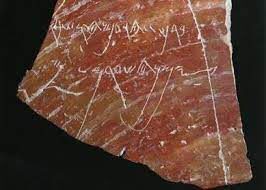 In 1910 G A Reisner of Harvard University uncovered 63 ostraca[1] in the remains of the ancient city of Samaria,[2] Notice that Samaria is in the clan of Manasseh on the west side of the Jordan. Further exploration increased the number to 102. Of these, 63 were legible enough to provide useful information. An example is shown (image credit: Bible Odyssey). The archaeological context in which they were found and an analysis of the Paleo-Hebrew writing places them approximately to the overlapping reigns of Jehoash and Jeroboam II, 784-783 BC.[3]

The ostraca were found to be recordings of the transmission of goods from various places in the region to officials in Samaria. The exact reason for the documentation is uncertain, whether to simply record a transaction or possibly for taxation purposes. Many were for luxury items such as aged wine and body oil.[4] These indulgent goods must have appeared to the average Israelite as the extravagance of the idle rich and they provide support for the writing of Amos, who was living at this time and wrote (6:4-6):

You lie in beds inlaid with ivory and lounge on your couches. You dine on choice lambs and fattened calves. You strum away on your harps like David and improvise on musical instruments. You drink wine by the bowlful and use the finest lotions, but you do not grieve the ruin of Joseph.

As well, these documents are important to students of the Bible not only because they give an insight to administrative, political and social practices of the day, but because 30 of them give the name of the clan or district from which the shipments were made. And amazingly, these districts are exactly the same as the ones Joshua gave to Manasseh’s descendants all those years before.

Below is a table of the clan /district name and the number of ostraca it appeared on.

The significance of these findings

The Samaria Ostraca provide evidence of the reality of the clans and the individuals they were named after and they destroy all other theories that try to account for Jewish occupation of Canaan other than what is recorded in the Bible.

They are unique in that they provide confirmation of the earliest sections of the Bible. And again, confirming the Rule of Thumb; “Bible critics are always wrong.”

[1] Ostraca is plural and ostracon is singular. They are inscribed pieces of broken pottery and are referred to as potsherds as well. The abundance of potsherds made a cheap and available form of writing material. Chiefly, they were employed for documents requiring only a small space such as letters, receipts, short lists and notes. [2] In ca. 880 BC, Omri, king of the Northern Kingdom, purchased land 13 kilometres (8 miles) to the northwest of Shechem from a man named Shemer and built a new capital. He named it Samaria after the former owner (1 Kings 16:24). Samaria remained the capital and most important city of the Northern Kingdom until its capture by the Assyrians in 722 BC (2 Kings 17:5–6). [3] Scott B Noegel, The Samaria Ostraca, Blackwell London, 2006, page 397. [4] Ibid. [5] Bryant G Wood, Bible and Spade, 10.1, winter 1997, pages 28-32. https://www.galaxie.com/article/bspade10-1-06.