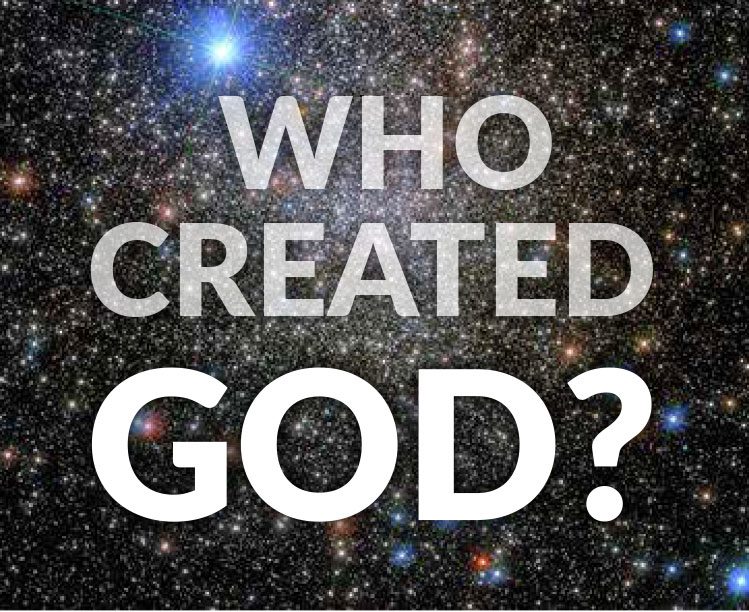 When I tell people that it was God who created everything, they often respond with; then, who created God? As if somehow, that brings the conversation to a close because I have been checkmated.

Before we can discuss who created God, it is necessary to establish that a Supernatural Being created everything and that this Being is the God of the Bible. It is necessary also, to confirm what happened at the point of creation.

Our universe is highly ordered with galaxies, solar systems, planets and moons, all rotating with perfect symmetry and in harmony. In fact, the Greek word for universe is cosmos which means order. (Image credit: NASA). Life is incomprehensively complex and every member is inter-dependant on other forms of life and its environment in a delicate balance that enables each to survive.

There are only two possibilities for the universe and life’s existence,[1] these are:

If you do not believe that the universe and all life were created by a Supernatural Being, then nothing is all you are left with. So, in absolute desperation, it is nothing that atheists say created everything.

The next step in creation from nothing which atheists claim, is the Big Bang.

In 1924 Edwin Hubble began to use the 100-inch reflector telescope at the Mount Wilson observatory (USA) and after measuring the red shifts of many galaxies,[5]  he noticed a pattern emerging, the more distant galaxies had the greatest red shifts, that is, they were moving away from us faster. In 1929 he published his results in which he stated his now famous Hubble’s Law which says that some cosmic phenomenon causes redshifts to tend to increase in proportion to distance from the earth.[6]

In his 1937 book, Hubble showed that he was horrified at the implication that the Earth could be in a special place since all but the closest galaxies are moving away from us. He wrote:

Such a condition [red shifts] would imply that we occupy a unique position in the universe … But the unwelcome supposition of a favoured location must be avoided at all costs … [and] is intolerable … moreover, it represents a discrepancy with the theory because the theory postulates homogeneity.[7]

Hubble’s observations that galaxies are moving away from us brings about the idea that if time was reversed, then everything would have come from a single point and this gave rise to the Big Bang theory that something very small exploded showering matter in all directions. Although it is in direct conflict with the second law of thermodynamics which states that things go from order to disorder, and not from disorder to order. But this is all atheists have.

The Big Bang theory has many problems. I discuss them here:  https://www.adefenceofthebible.com/2015/07/29/galactocentricity-the-galactocentric-universe.

There must have been an instant of creation

The Cosmological argument of cause and effect is a powerful philosophical tool, which is based on a universal law applicable in all science and human experience. It leads to the conclusion that there the universe must have had a point of creation.

The argument goes like this: in our everyday experiences we observe and know that nothing happens by itself, but rather that everything that happens has a cause. Something cannot come from nothing. For example, suppose you were with a friend and you heard a loud bang, and you said to your friend, “What was that?” and he said, “Nothing, just a bang,” you would know that his answer could not be right, because there cannot be a bang without something causing it. Every effect, the bang in this case, must have a cause.

The effect of the Universe must have had a cause and the only cause could be a something/someone outside of the universe. Everything that has a beginning has a cause. The First Cause argument confirms that the universe had a beginning.

The fact that the universe is running down which almost all cosmologists believe, and this is in accordance with the second law of thermodynamics, means it started wound up and consequently, had a beginning.

Creation by a Supernatural Being

This Supernatural Being is the God of the Bible

Interestingly, a Supernatural Being has contacted us and told us that it was He who created everything. Also, He told us how He created; He simply spoke everything into existence. He has told us in what order He did it; we can read about this in Genesis chapter 1. And the reason He did it? Because it pleased Him.[8]

The apostle Paul states that God’s eternal power and Godhead are clearly evident in creation; to such an extent that mankind is without excuse for not believing.  The Godhead is the trinity of God the Father, God the Son and God the Holy Spirit that is, three in one. Consequently, we would expect to see the number three appearing many times in creation since Paul, writing under the influence of the Holy Spirit, asserted that the Godhead is clearly seen in creation.

It is significant then, that all creation actually consists of three parts; time, space and matter. This trinity of creation is evident in the first ten words of the Bible: In the beginning, God created the heaven and the earth.

And each of these components consist of three parts. Time has past, present and future. Space has the three dimensions of length, breadth and width; and matter can exist in three forms;  solid, liquid and gas. As well, the basic unit of matter, the atom, is composed of three main parts; protons, neutrons and electrons. The whole electromagnetic spectrum (gamma rays, x-rays, ultraviolet, visible light, infrared, microwaves and radio waves) is comprised of three components; an electric field, a magnetic field, and motion. Clearly, God has left His signature on His creation.

At the point of creation 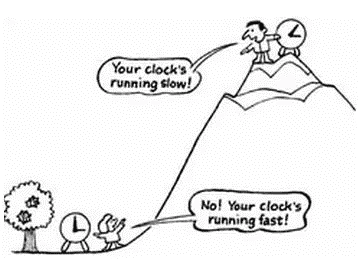 Time is no different from the other aspects of creation in that it is part of the whole package and it is influenced by the other components and interdependent on them. For example, temperature affects pressure and heat has an effect on chemical reactions. In the same way, gravity affects time. The greater the gravity, the slower time moves as our cartoon shows, and speed slows down time and has been measured in fast travelling planes. When speed increases to that of light, time stops completely.

Some Bible verses which state that God has always existed:

Psalm 90:2 Before the mountains were brought forth, or ever You had formed the earth and the world, even from everlasting to everlasting, You are God.

Exodus 3:14 And God said to Moses, ‘I AM WHO I AM.’ And He said, ‘Thus you shall say to the children of Israel, “I AM has sent me to you. What God is saying is that He is continually existent.

Revelation 1:8 I am the Alpha and the Omega, the Beginning and the End,’ says the Lord, who is and who was and who is to come, the Almighty.

Observations and measurements show that our galaxy and hence our earth is in a favoured position in the whole of the cosmos; this is no accident.

All that physically exists can only have been created by an entity that is outside of creation. This Supernatural Being is the God of the Bible. Its pages tell us how He created, in what order He created and why He created. As well, it tells us that He has always existed. Since time only came into existence at the point of creation and that God is outside of time. Time has no meaning when applied to God; for He is continually existent and not created.

[1] The idea that the universe has always existed is not tenable because its amount of usable energy is decreasing in accordance with the Second Law of Thermodynamics and it will eventually end with no motion within it and a uniform temperature throughout it. It was created wound up and it is now winding down. As well, the notion that the universe created itself is also untenable because before it could do anything, it first had to exist. [2] Krauss, L. A Universe from Nothing.  New York: Free Press, 2012. [3] Dan W Reynolds, Journal of Creation, April 2013, 27(1), pages 30-35. http://creation.com/review-krauss-universe-from-nothing. [4] Discover, April 2002. DISCOVER, April 2002. [5] Light emanating from an object moving away from an observer has its wavelengths stretched to the red end of the spectrum. [6] E. Hubble, A Relation between distance and radial velocity among extra galactic nebulae, Proc. Nat. Acad. Sci. USA, 15:18-173, 1929. [7] Hubble, E.P., The Observational Approach to Cosmology, The Clarendon Press, Oxford, UK, pp. 50–59, 1937. [8] Colossians 1:16; Revelation 4:11.