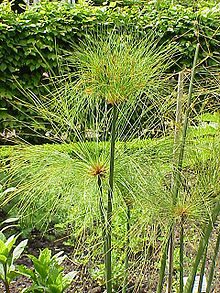 The Egyptians used papyrus to make paper, baskets, sandals, mats, rope, blankets, tables, chairs, mattresses, medicine, perfume, food, and clothes. Truly, papyrus was an important “gift of the Nile”. The basket into which Moses was placed (Exodus 2:3) would have been constructed from papyrus; referred to as bullrushes in the King James Bible, and even larger ones such as those to transport envoys to Cush referred to in Isaiah 18:2. But by far the most common use was for the construction of writing material. The tall slender reeds were cut into lengths of about 30 cm (one foot) and then slit length wise after the coarse outer husk was removed. The thin long pieces so produced were layer horizontally and another layered was placed over the first at ninety degrees. The whole was then pressed so all of the liquid was squeezed out, and then it was placed in the sun to dry. The resulting paper could be used to write on or ccould be  joined together end to end to form a long scroll. Papyrus was the most common form of material on which to write. It was relatively easy to prepare, cheap and could contain a lot of information. Whereas clay tablets, also common at the time, could contain only a limited amount of information as did broken pottery called potsherds. Parchment also called vellum, was made from exceptionally cleaned skins of calves or baby sheep. Parchment was used from about the same time as papyrus, and it had the great advantage of being more durable. At the time of Paul, both were used for recording the scriptures as evident from Paul’s request to Timothy to bring the scrolls (papyrus), especially the parchments (2 Timothy 4:13). 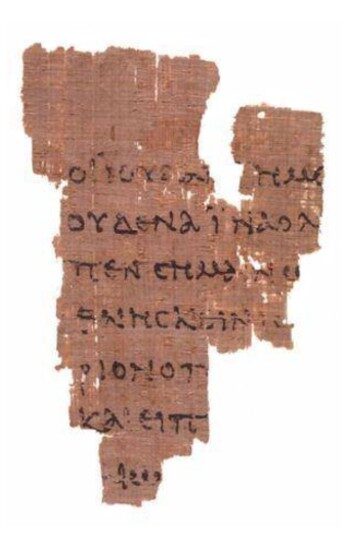 Scrolls were made by joining papyrus sheets end to end. The oldest Greek Old Testament manuscript is written on papyrus and shown here (credit Wikipedia commons). This in in the John Rylands Library. It has Deuteronomy chapters 23-28 written on it. The Papyrus Harris and the Book of the Dead, were written on scrolls of papyrus some 40 metres (123 feet) long.

Papyrus was important to the Egyptian economy

It was important to the Egyptian economy and was a resource Egypt had in abundance with which it traded. 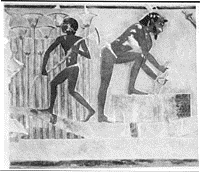 Exports of Egyptian-made papyrus paper beginning about 3000 B.C. raised money needed to maintain armies on the Nile. In later millennia BC, papyrus exports from government-controlled marshes would become the chief source of income for Egyptian monarchs. But the plant’s most important role was for paper. It was sold in large bales or rolls sometimes 20 to 45 yards/metres long. (John J. Gaudet April 8, 1998, Washington Post).[1] The Wen-Amon papyrus states that 500 rolls were sent to Byblos.[2]

The image is: Gathering of Papyrus. From the Tomb of Piumra, Dynasty XVIII, Thebes

In early times, visitors from other ancient cultures came to Egypt and were impressed by the luxuriant Cyperus papyrus plant growing so abundantly everywhere. According to the ancient Greek historian Herodotus, circa 450 BC, papyrus was “plucked from the marshes, the top cut off and turned to other ends, and the lower part…eaten or sold.”. We have an early statement from the Roman naturalist Pliny the Elder (AD 23-29), who wrote about the plant growing in the marshes and sluggish waters of the Nile to a height of fifteen feet in Book XIII, 71, of his encyclopedic Natural History.

The stately, green plant, called djet or tjufi by the ancient Egyptians, played such an important utilitarian role in their daily life, but today, sadly, it has almost disappeared from Egypt. When exactly this happened is not known. But it is believed by some the original plant died out along the Nile River before the time Napoleon Bonaparte arrived in Egypt with his troops in 1798. The plant is not recorded in Napoleon’s famous French publication of the early 19th century entitled La Description de l’Égypte, which included a section devoted to the flora and fauna of Egypt.[3]

Neither the explorer Peter Forsskål, an apostle of Carl Linnaeus, in the 18th century, nor the Napoleonic expedition saw it in the delta.[4]

Ancient Egypt had abundant growth of papyrus for thousands of years, certainly from 3,000 BC to sometime before the 18th century after which it stopped growing unexplainably. So, it grew abundantly for about 4,000 years and then stopped and nobody knows why.

If we turn to the book of Isaiah, chapters 19 and 20 contain prophecies about Egypt and verses 6-7 say that; The reeds and rushes will rot away,….and will be no more.  This is exactly what has happened. Egypt is now attempting to re-grow papyrus to satisfy the tourist industry, in giving demonstrations of how papyrus was used to make writing paper.

Who would have expected an insignificant prophecy buried in the Book of Isaiah would come true hundreds of years after it was written.  When the prophecy was made, papyrus growth was flourishing and the industry it supported, was firmly established.

[1] John J Gaudet is a Fulbright Scholar, a writer and practicing ecologist. His early research on papyrus, funded in part by the National Geographic Society. He has published much on the topic of papyrus. [2] https://www.livius.org/articles/person/wen-amun. [3] https://mcclungmuseum.utk.edu/2008/09/02/papyrus. [4] https://en.wikipedia.org/wiki/Cyperus_papyrus.