Shishak I also known as Sheshonk, Sheshong, or Shosheng, founded the twenty-second dynasty and ruled Egypt from 945 to 924 BC and he is the first pharaoh referred to specifically in the Bible. The Bible tells us that Solomon took one of Shishak’s predecessors’ commonly thought to be Siamun, daughter for his wife (1 Kings 3:1). Siamun was Pharoah of Lower Egypt (979-960 BC) and wanted to improve his political position by marrying into the regional super power; Israel.[1]

Israel fell in influence towards the end of Solomon’s reign and even further under the reign of Solomon’s son Rehoboam. Shishak would have been aware of the wealth that was contained in Jerusalem.

In about the twentieth year of Shishak’s reign and the fifth year of Rehoboam’s, Shishak raided and plundered the recently divided kingdom of Judea (Southern kingdom) and Israel (Northern kingdom). The Bible reports this raid (1 Kings 14:25-26 and 2 Chronicles 12:1-12). The 2 Chronicles report is given below:

1After Rehoboam’s position as king was established and he had become strong, he and all Israel with him abandoned the law of the LORD. 2Because they had been unfaithful to the LORD, Shishak king of Egypt attacked Jerusalem in the fifth year of King Rehoboam. 3With twelve hundred chariots and six thousand horsemen and innumerable troops of Libyans, Sukkites and Cushites that came with him from Egypt, 4he captured the fortified cities of Judah and came as far as Jerusalem. 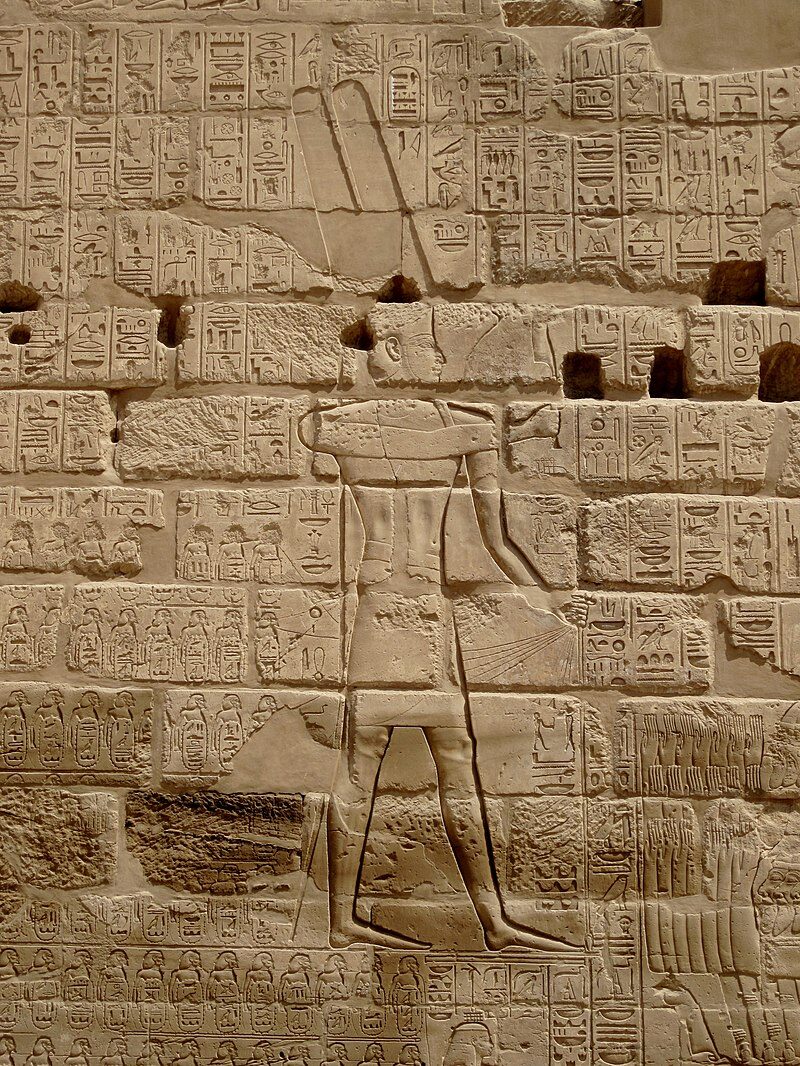 Shishak recorded his successful raid in a huge relief at the Karnak Temple in Luxor, shown (picture credit: Wikimedia commons).

The relief depicts the god Amun and the goddess presenting ten lines of Asiatic captives to Shishak. Each of the 156 captives bear the name of a site captured by Shishak. These are shown below in an expanded image of the relief (credit: Biblical Archaeology Society). From these names the size of the campaign is revealed which went as far as the Sea of Galilee. Thus, he claimed to have plundered the Northern kingdom as well. Only about half the names are legible and these include the biblical cities of Taanach, Beth Shan, Gibeon, Beth Horon, Aijalon and Socoh. There is little doubt that Jerusalem was included in the list as well and most likely it is among the names which are not legible.[2] 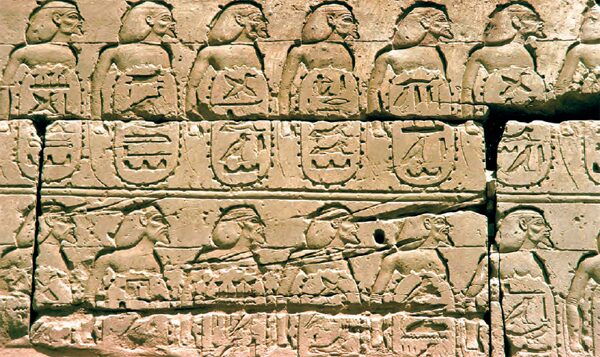 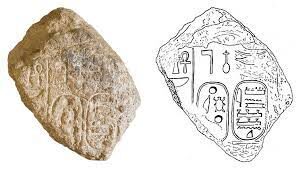 A limestone fragment once belonging to a three-metre victory stele was found during the early excavations of Megiddo in Israel (shown. Image credit: interBible.org.) and confirms Shishak’s invasion. The fragmentary Egyptian hieroglyphics read: Bright is the form of (the sun god) Re. Amun’s beloved. Shishak.[3]

Shishak’s relief not only confirms the Bible’s report of his northern campaign, but also the names and places of six biblical towns. Egyptian scholars date Shishak’s reign as from 945 to 924 BC and this overlaps with Rehoboam’s reign of 930 to 913 BC confirming that Rehoboam was king of Judah, the southern kingdom during Shishak’s reign.

The early events of the Bible were not composed by a group of Jewish religious leaders sitting somewhere in exile in Babylon attempting to explain their situation as many liberal theologians say. They consist of recorded history showing how God dealt with His chosen people. Over and over again, archaeology is confirming the people, places and events recorded in the Bible.