All Christians should know of the life and work of Amy Carmichael. She was a faithful girl who was raised in Victorian Britain where society was rigidly structured; men worked by the sweat of their brow and women had children and nurtured them and looked after the home. The system worked well and society flourished. Through her great desire to serve her Lord, Amy stepped out in faith from this structured society, to reach the unreached in other lands with the good news. She never married, although there were proposals, because she thought marriage would hinder her work for the Lord. 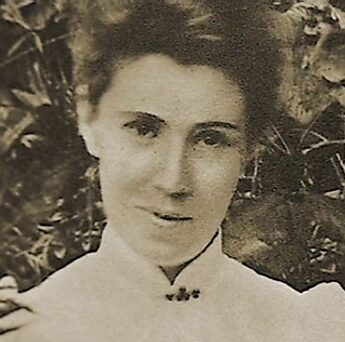 Amy Beatrice Carmichael (16 December 1867 – 18 January 1951) was born in the small village of Millisle, County Down, Ireland, and the oldest of seven children. Her parents were David Carmichael, a flour miller, and his wife Catherine, both devout Christians. Amy attended Harrogate Ladies College for four years in her youth. Amy’s father moved the family to Belfast because of changes that had taken place in flour milling, when she was 16, but he died two years later. In Belfast, the Carmichaels founded the Welcome Evangelical Church. In the mid-1880s, Amy started a Sunday-morning class for the ‘Shawlies’ (mill girls who wore shawls instead of hats, and worked 14 hours a day for little money) in the church hall of Rosemary Street Presbyterian. This mission grew quickly to include several hundred attendees. At this time, Amy saw an advertisement in The Christian for an iron hall that could be erected for £500 and would seat 500 people. Two donations; £500 from Miss Kate Mitchell and one plot of land from a mill owner, led to its erection in 1887.  She called it the Welcome Hall and made it a meeting place for the shawlies.[1] Thanks to Amy’s evangelism, many girls who were at the bottom of the social column, who worked exhausting hours, who were poverty stricken and lived under unsanitary conditions and were open to infection of all of the diseases that were prevalent at the time, were, to quote Fanny Crosby’s great hymn, safe in the arms of Jesus. 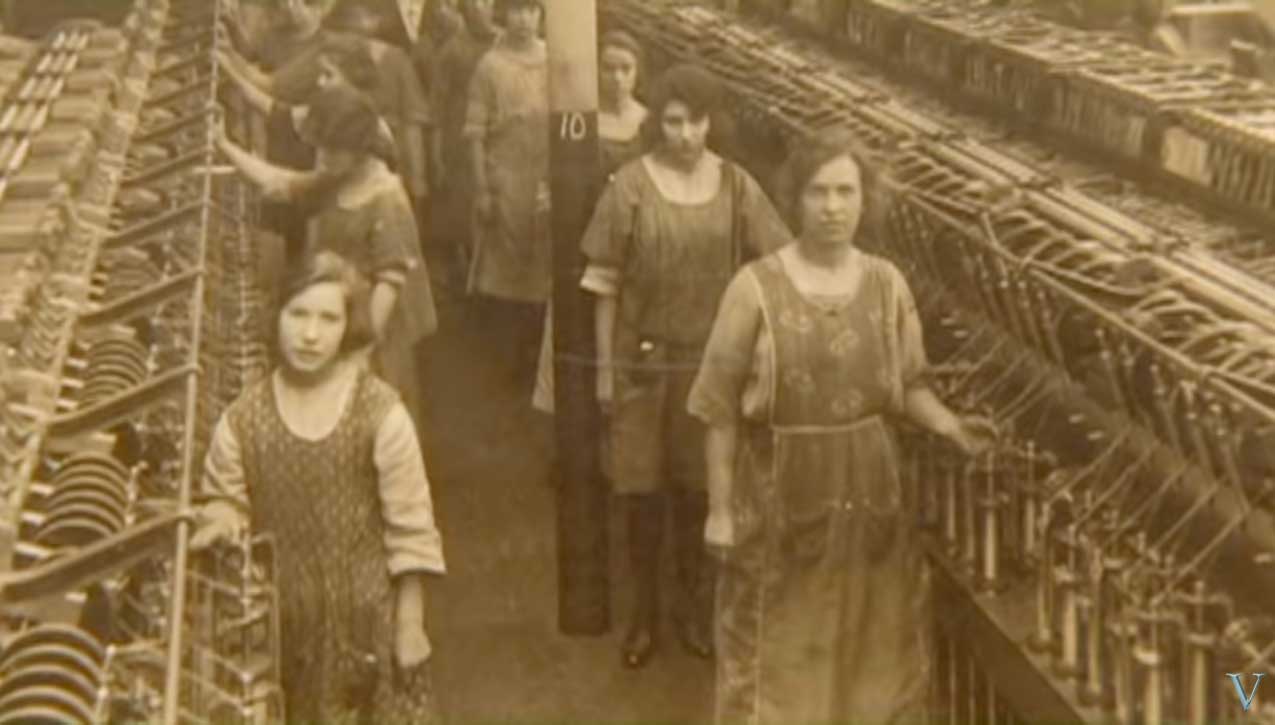 An image of Shawlies from the period.

The Welcome Hall is still operating today as a church. There website is: https://welcomechurch.co.uk.

In September 1886, following an invitation from some friends, she attended a Keswick Convention where she either heard, or heard about Hudson Taylor, the founder of the China Inland Mission. She became convinced of her calling to missionary work to share the gospel overseas and help those in need. In 1892 she volunteered to the China Inland Mission but was refused on health grounds. However, in 1893 she sailed for Japan as the first Keswick missionary to join the Church Missionary Society (CMS) work, led by Barclay Buxton. After less than two years in Japan and Ceylon, she was back in England before the end of 1894. The next year she volunteered to the Church of England Zenana Missionary Society, and in November 1895 she arrived in South India, never to leave. While still learning the difficult Tamil language, she commenced itinerant evangelism with a band of Indian Christian women, guided by the CMS missionary Thomas Walker. She soon found herself responsible for Indian women converts, and in 1901, she, the Walkers, and their Indian colleagues settled in Dohnavur, which is situated in Tamil Nadu, fifty kilometres (thirty miles) from India’s southern tip. 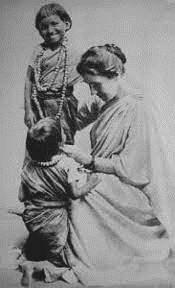 On March 6th, 1901, little Preena, a seven-year-old girl, fled from one of the Hindu temples into the mission compound and begged to be protected. It was then that Amy uncovered one of the ugliest sores on ‘Mother India’s body, the secret trafficking in temple girls. She learnt how fathers and mothers sold their daughters to different gods, turning the precious daughters into temple prostitutes. As a consequence, she founded the Dohnavur Fellowship.

Amy fought many battles on her knees as she wrestled for the bodies and souls of these helpless children. Many times, her and her colleges risked their lives and faced arrest and imprisonment in order to snatch some pleading child from the jaws of defilement and destruction. One by one other girls found their way to Amma, the Tamil word for mother, as she courageously protected them. By 1904, seventeen girls were under her care. In 1918, boys were taken in also to protect them from unscrupulous people selling them to temple gods just as they had sold the girls. The numbers soon mushroomed into hundreds as other children became part of the loving and caring family.[2]

On October 24, 1931, Amy Carmichael fell down a hole as she was inspecting a new construction in an area where people could spend time from the stifling heat of Dohnavur. She broke her leg and dislocated her ankle. Other complications set in and her usual activity stopped. She was limited to her room and the occasional work on the veranda but it did not limit her ministry. Over the next twenty years she wrote thirteen of the thirty-seven books she wrote in her lifetime. From her confinement, she was able to direct the mission through her capable associates.

In 1948 she suffered a second fall which confined her to her bed. Even from here, she constantly partitioned God through her prayers. She died three years later.

Her work transformed Dohnavur into a sanctuary for over one thousand children who would otherwise have faced a bleak future. The Dohnavur Fellowship continues to minister, teach, train and provide medical care today for India’s most vulnerable. The statement on their website makes the following point:

In 1947 the government of India made the custom of giving babies and young children to this kind of life illegal, but the practice of infanticide, as a way of coping with poverty and unwanted female babies, is widespread. Other family tragedies also put children’s moral and physical safety at risk and the little ones who come to The Dohnavur Fellowship today, come with the same spoken or unspoken cry for protection on their lips. Our Unseen Leader, the Lord Jesus Christ, still says, “Let the little children come to me”. 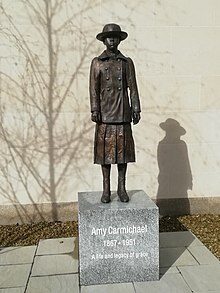 Amy Carmichael’s life is a testimony of what can be achieved by someone who is devoted to serving her Lord and following His call on her life. She was born with a sickly disposition which retarded her movements. As a result of her fall, she spent the last twenty years of her life confined to her bed with only short walks possible. During this time, she suffered from neuralgia and the pain it caused. However, this never stopped her from introducing the Lord Jesus to an underclass of girls called Shawlies, travelling to India rescuing hundreds of young girls from temple prostitution and other abuse and providing safe living conditions, education and health care for the downtrodden in India. Thousands have benefited from the 37 books she wrote.

Much has been written about her life and her achievements and a film was made in 2002. The bronze statue is of Amy Carmichael as a young girl. It stands in Hamilton Street in Bangor, County Down, Northern Ireland, on the grounds of the Presbyterian church. Picture credit: Wikimedia commons.

A saying of hers summed up her life, “When I consider the cross of Christ, how can anything that I do be called sacrifice?”