The Purple Dye of the Bible Found 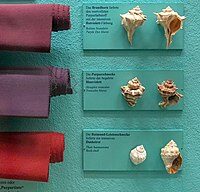 The purple dye used in antiquity was highly valued because it was extracted from a shell fish, or more precisely, a group of marine molluscs: Bolinus brandaris, Hexaplex trunculus and Stramonita haemastoma pictured in this order (Image credit: Wikimedia commons). As can be seen, the most purple dye comes from Hexaplex Trunculus. They grow abundantly in the Mediterranean Sea, particularly around the shores of Lebanon and Israel and right through to Greece. It is easy with a pair of flippers, goggles and a snorkel to enter the water on any beach in Israel and collect a hand full these molluscs.

The dye is extracted from the snail’s hypobranchial gland which is located just under the mollusc’s mantle, by removing it and squeezing out the creamy liquid it contains, which is about 0.9 of a gram. Once the liquid comes in contact with sun light and air, it turns the characteristic purple colour. It is thought that the Phoenicians developed the manufacture of this dye. It is called also, Tyrian Purple, as large works were present in Tyre. Large deposits of the mollusc shells can still be seen strewn along the shore of Tyre and near the ancient dye works of Athens and Pompeii.[1] As a consequence, the dye was very expensive and only very wealthy people, or those in high office could have material and clothes dyed purple.

The process of extracting the dye and then dying material is complex. In his History of Animals, Aristotle described the shellfish from which Tyrian purple was obtained and the process of extracting the tissue that produced the dye.[2] Pliny the Elder described the production of Tyrian purple in his Natural History.[3] However, these descriptions were not detailed enough to obtain dying success as the process is long and involves biochemical, enzymatic and photochemical reactions, as well as reduction and oxidation. Processes that probably took days. However recently, some success was eventually achieved by using the bacteria in the flesh of the snail itself.[4] 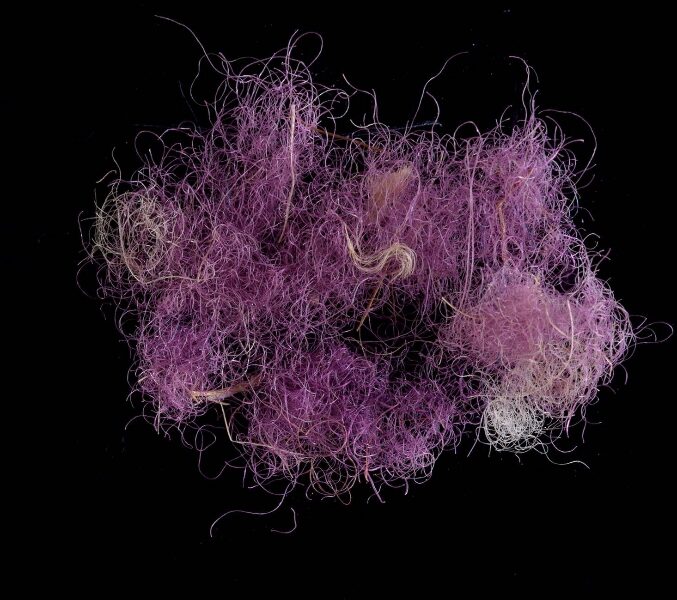 In January, 2021, a team led by Erez Ben-Yosef of Tel Aviv University, announced the finding of three purple textile fragments in a heap of industrial waste while excavating a large copper smelting camp known as Slave’s Hill in the Timna Valley in Israel’s arid Negev region.[5] The samples were dated to late 11th – early 10th centuries BC, the time of the Jewish kings David and Solomon. The dating was done by radio carbon analysis. The nature of the purple dye was confirmed by High Pressure Liquid

Chromatography (HPLC) which isolated and identified the main purple pigment as 6,6-dibromoindigotin which comes from the mollusc Hexaplex trunculus. For the organic chemists among us, its chemical structure is shown. 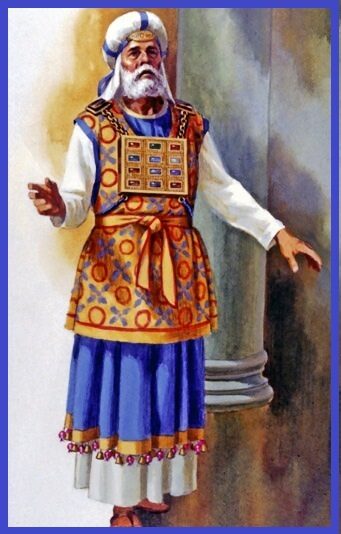 The prestige that the purple dye bestows on people and property is easily seen in the Bible. Exodus chapters 25 to 28 and chapters 35 to 38 describe the use of purple in the construction of the tabernacle. The high priest’s clothing contained purple fabric (Exodus chapters 28, 35 and 39) (image credit: https://wwyeshua.files.wordpress.com/2018/07/13.jpg). Judges 8:26 describes the kings of Midian as wearing gold and purple garments. In doing so, it places purple on the same level as gold but purple was most likely more expensive than gold.

When King Solomon began building the temple at Jerusalem, he asked King Hiram of Tyre to please send him an artisan skilled to work in gold, silver, bronze and iron and in purple, crimson, and blue fabrics, trained also in engraving (2 Chronicles 2:7). Esther 8:15 states; Mordecai went out from the presence of the king in royal apparel of blue and white, and with a great crown of gold, and with a garment of fine linen and purple: and the city of Shushan rejoiced and was glad.

Both Jeremiah and Ezekiel describe people of importance as wearing purple in their clothing. And, of course, at the lead up to Jesus’ crucifixion, the soldiers mocked Him by putting on Him a kingly purple robe.

Because of their nature as organic materials that inevitably decompose, textiles rarely survive in the archaeological record. When circumstances align for their preservation, these fragile artifacts provide a window into the social, economic and technological spheres of the ancient world.[6]

This purple dye from a mollusc is interwoven throughout the Bible in a way that shows its significance and its value. The recent discovery of material dyed purple from a murex sea snail enables us to lay eyes on the exact shade of purple that was used in the tabernacle, temple and priestly garments.