The date of the Exodus is given in scripture. 1 Kings 6:1 state that Solomon began to build the Temple, in the four hundred and eightieth year after the people of Israel came out of the land of Egypt. Synchronization between certain events in the reigns of later Israelite kings and Assyrian chronological records fix the fourth year of Solomon’s reign at 966 BC.[1] Since Israel’s exodus is placed 480 years prior to 966, it would have occurred in 1446 BC. This period of time is referred to as Late Bronze I-II (LBI-II) by archaeologists.

Moses wrote the first five books of the Bible (the Pentateuch) in the period immediately following this date as he led the Children of Israel to the Promised Land. Jesus confirmed that Moses was the author of the Pentateuch (Mark 10:3; Luke 24:27; John 1:17).

Liberal theologians say that there was no alphabet in which to write during this time of LBI-II. Hence the Bible must have been written after the time of Moses, thereby contradicting Jesus’ teaching. 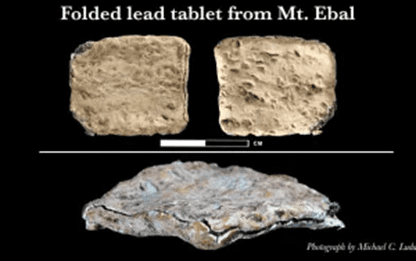 Archaeologist Scott Stripling and an ABR (Associates for Biblical Research) team announced in December 2019 that they had discovered a lead tablet (shown.  Image by Michael C. Luddeni) in discarded material taken from excavations conducted by Israeli archaeologist Adam Zertal on Mt. Ebal,which is located in Samaria. Zertal is believed to have found Joshua’s altar (Joshua 8:30-31) during his diggings on the mountain during much of the late 1980s.

The small lead tablet 2cm x 2cm (0.8 inches x 0.8 inches) was dated to1400-1200 BC which is consistent with the time of Moses. An analysis of the chemical isotopes of the lead used in the tablet shows that it came from a mine in Greece that was active during this period.

The folded tablet was too brittle to be opened without destroying it. So, over the next three years, a team of scientists, including four from the Academy of Sciences of the Czech Republic who used advanced imaging (tomographic scans) of the tablet to recover the hidden text. Two epigraphers (specialists in deciphering ancient texts) were also involved: Pieter Gert van der Veen of Johannes Gutenberg-Universität Mainz and Gershon Galil of the University of Haifa.

Reading the concealed letters proved tedious, according to van der Veen, but each day we recovered new letters and words written in a very ancient script. Galil commented later, that when he saw the scans, he almost immediately recognized the formulaic literary structure of the inscription: From the symmetry, I could tell that it was written as a chiastic parallelism. Daniel Vavrik and his colleagues from Prague ensured the accuracy of the raw data which the team interpreted.[2]

What was revealed was astounding; an ancient Hebrew curse inscription consisting of 40 proto-alphabetic (equivalent to proto-Sinaitic) letters that mentions the Hebrew word for “cursed” (arur) ten times, and Israel’s God YHWH twice! The deciphered message reads as follows:

You will die cursed.

Cursed you will surely die. 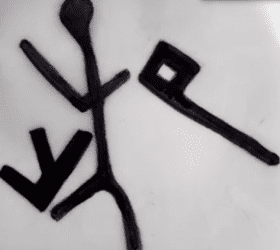 The term “YHW” is one of the short forms for the name of Israel’s God YHWH that are seen in the Bible and other inscriptions from later periods. It was used in proto-alphabetic script found on the tablet (shown in image). These very early proto-alphabetic letters, some of which still have forms derived from earlier pictorial symbols, or hieroglyphs match the presumed dates.

The “cursed tablet” as it has come to be known was found in the right place (Mt Ebal) and is of the right period. Moses spoke to the Children of Israel before they entered the Promised Land, pronouncing blessings on them if they continued to worship only God. From Mt. Ebal, he told them of the curses they would receive if they worshipped foreign gods (Deuteronomy 27 and 28). Joshua built an altar to God on Mt Ebal and pronounced the curses as Moses had done (Joshua 8:30-35).

The scientists comment on the significance of their finding

Haifa University Professor Gershon Galil told The Times of Israel. That, the discovery represents absolutely the most important inscription ever found in Israel. This is a text you find only every 1,000 years.[3]

At a press conference at Lanier Theological Seminary, on Thursday, March 24th, 2022, Dr Scott Stripling stated; The ramifications of this curse tablet from Mt Ebal, the mountain of the curse, are enormous. First, it synchronises with the account of the covenant renewal ceremony in Joshua 8. Second, it proves that there was an alphabetic script with which      Moses and Joshua could have written the earliest books. Third, it dismantles the Documentary Hypothesis, which claims that scribes wrote different portions of the early biblical writings centuries apart. The aftershock of this find will reverberate for decades.

As more discoveries are made, archaeology only serves to confirm the authenticity of scripture. The Bible states at the start, that it is a written account (Genesis 5:1) and this discovery of the earliest Hebrew writing showed it to be alphabetic and available to be used for this purpose. As well, God instructed Moses to record certain events. The first time in Exodus 17:14 followed by 24:4, 34:27; Deuteronomy 31:19 and 24). The Bible makes perfectly clear that Moses wrote, and this discovery confirms that writing was available to be used at the time.